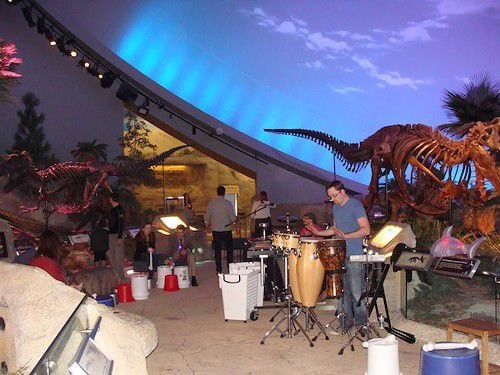 Paleolithic percussion in the Dinosphere. 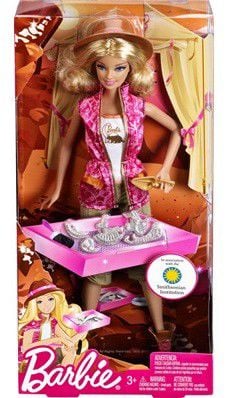 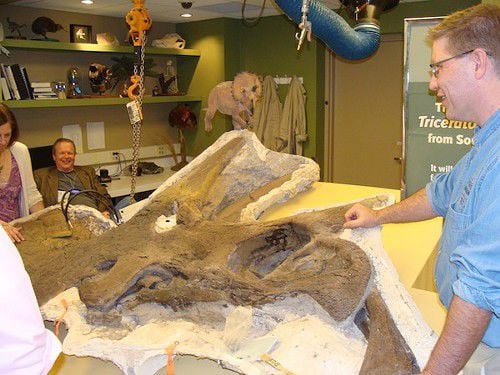 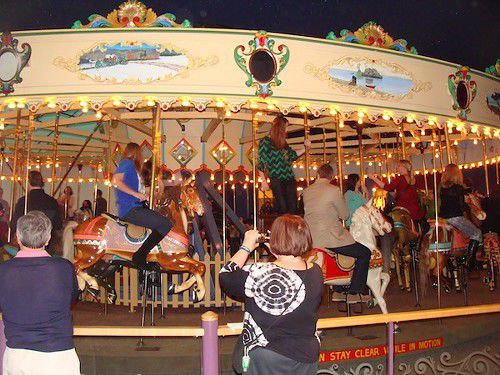 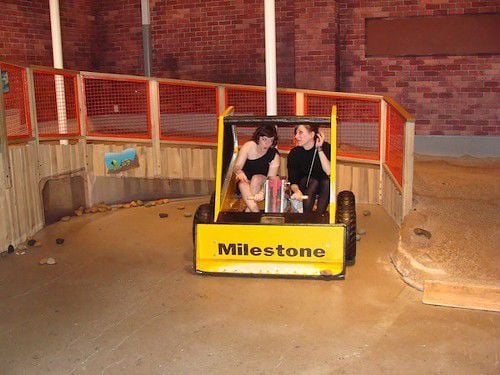 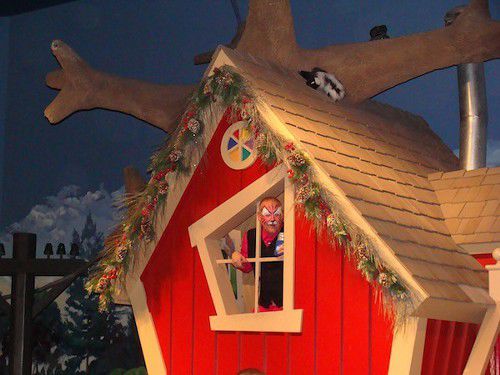 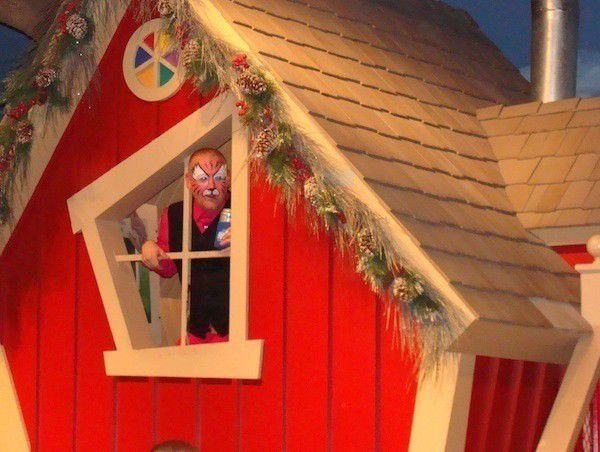 Paleolithic percussion in the Dinosphere.

When I told my daughter, Naomi, that I'd be going to Adult Swim, her reaction was immediate and unequivocal: "The Children's Museum should be for children and not for adults," she said.

I've probably taken Naomi to the Children's Museum a dozen times over the past several years. If not for her, I would've never experienced Barbie: The Fashion Experience. While this was never my favorite exhibit in the museum - this temporary exhibit has since been rotated out - I admire the way the curators merged the world of fashion and design and encouraged children to investigate clothing design as a possible career choice.

Not long after I walked into the lobby at around 8 p.m. on Saturday, Feb. 22 - under the giant yellow Bumblebee Transformer - I got an opportunity to ask Dr. Jeffrey Patchen, the CEO of the Children's Museum, what Adult Swim was all about.

"It's really an opportunity for adults to come here and explore the Children's Museum without children," he said. "And it's kind of funny because we talk about exploring your inner child. But really it's about allowing adults to have some unfettered time to enjoy the gallery, enjoy the experience with other adults. We get to split the proceeds of this with Sapphire Theatre. It's a collaboration which has been really great. "

Since this was the second Adult Swim event to take place (the first one took place in 2013), I asked Dr. Patchen if there was anything they learned from last year's event that they applied to this year's.

He wasn't kidding. The first watering hole, as it were, was to be found by the Water Clock on level one, featuring a decent variety of alcoholic beverages. And as I was soon to discover, there was a beverage station parked on every floor. And the food! I'll get to that later.

Not far away from the beverage station, Heather Liden and Jeanne Jones of Indy Hoopers, dressed like inhabitants of some South Pacific island devoted to techno-raves, were showing off their hula-hooping skills. Eventually, as the night wore on, patrons would try their own skills at hula-hooping before the entire first floor of the museum exploded into a dance party.

I wasn't interested in hooping, or imbibing, at least just yet. I wanted to check out what was going on in my favorite part of the Children's Museum, the Dinosphere, on the lower level. There was Paleolithic percussion with D. Marquis and Conga J, and some guests were joining in trying to play along with their bone-shaped drumsticks on plastic bucket drums. But I was really just interested in the dinosaurs, the same as I've always been interested in dinosaurs, since I was five years old.

While pterodactyls (seemed) to fly in the sky-like sphere overhead over Stan the T-Rex, I talked with the Children's Museum's Mookie Harris, who, acting as my interpretive guide, introducing me to the some of the restored dinosaur skeletons that I've overlooked in the past, among them the ostrich-sized Bambiraptor hailing from the late Cretaceous which ended 65 million years ago.

"The kid who found it thought that it really thought it looked like a deer," so he got to name it," he said.

"Too bad there's not a Barbie Raptor," I said.

"Actually," Harris said. "We do have a paleontologist Barbie. She came from the manufacturer that way. We had to dress up Ken ourselves."

Indeed there was a small display window with Ken and Barbie dolls at a mock dinosaur dig.

Another corporation besides Mattel - Barbie's manufacturer - had a presence in the Dinosphere: Rolls Royce. A gallery sponsor, Rolls reps were handing out glowing bracelets and necklaces to guests. Rolls, in addition to making glitzy cars, also manufactures component parts for high tech commercial and military jet engines and has a dozen manufacturing facilities in the state.

Maybe it was a coincidence that Rolls was located near a display of fossil skeletons. Rolls engines - whether they be jet or automobile - are pretty much wholly dependent on fossil fuels.

On my way out of Dinosphere, I said hello to a "Supercroc" skeletal reproduction. This 110-million-year-old croc was found in Niger, West Africa, where I served as a Peace Corps volunteer from 1992-1994. The early '90s seems like a hundred million years ago to me now. And there's no going back to Niger now, for me really. Even if I was able to afford a trip there, I would be doing so at considerable risk of kidnapping by Al Qaida-affiliated groups. The Peace Corps evacuated its last volunteers from the country back in 2011.

I made my way out of the Dinosphere back into the world of smart phones, bling, and Chihuly Glass.

Under the wildly colorful underbelly of the 43-foot high sculpture of "The Fireworks of Glass," a rainbow's assortment of colored glass tubes and flowers constructed by Dale Chihuly, there was a slowly spinning, moving wheel called Christel's Kaleidoscope where you could sit down and be moved around 360 degrees every few minutes like a kaleidoscope lens.

All the humanoid riders reclined on the slow moving wheel of Christel's Kaleidoscope had their smartphone cameras pointed up to the ceiling, relaying their colorful experience to all their peeps.

I didn't partake of this particular activity. Instead, I chowed down on the offerings of Arnie's Pizza and California Pizza Kitchen, pizza and Thai Noodles with chicken respectively). But I did check out the "Planetarium Mash-Up II" shortly afterwards. This planetarium show took all the most exciting bits of all kinds of presentations and mashed them up with none of the boring science stuff. With its quickly moving, highly geometric Buckminster Fuller "Bucky Ball" and Mobius strip visuals - both of which turned into virtual vomit comets - I'm surprised no one unloaded the contents of their stomach on the planetarium floor.

On my way up to the fourth floor I had some braised beef tacos offered by Seasons 52 - there was a long line for that item. And then I sampled the Zinfandel Scallops (with apple fromage blanc, pistachio, and bacon) offered by Cerulean. In the Dow Science Center on the fourth floor I washed all this down with a free sample or two of Sun King Beer.

All of this imbibing was not without considerable cost to the environment, as my samples had to be accompanied by a plastic plates, fork, cups and napkins. So if the thousand-odd partiers each had five samples a piece, that would generate something like 15,000 distinct pieces of trash. And if this plastic went to landfill, it wouldn't degrade right away, even if you measured the degradation by geologic time.

And, who knows, maybe several million years from now a cockroach-biped-geologist will dig up this trash in some dig somewhere and describe it - as some geologists are already describing post Holocene geologic history - as the Anthropocene layer, a layer thick with plastics, heavy metals, and bling of all sorts including the iPhone 5.

I thought back to my Peace Corps days, when my fellow volunteers and I were content to eat out of common bowls or plates with villagers. Might it be a good thing if such a way of serving food came back into style?

I didn't let myself get too carried away by such thoughts as I entered the Dow Science Center. There were some adults at play in the construction zone, a pair of twenty-something women, Erin Webley and Kellyn Christmas were having about as much fun as two people can have on a pedal-powered earth mover. They didn't mind if I took pictures for NUVO.

Also on the top floor there was a long line forming for the carousel but I wasn't interested in that. I found myself dragged down by my inner child back into Dinosphere. This time I visited the Paleo prep lab where Lead Curator Dallas Evans was exhibiting a triceratops skull, still partially encased in plaster, found in South Dakota.

I got to talking with him a little bit about the exhibition with Evans who said, "You have to make sure real bones are out there because the kids always ask." Accordingly, a lion's share of the restored dinsosaur skeletons in Dinosphere are actually composed of real fossils.

By then it was just about midnight and it was time to go home.

The next day I showed my daughter Naomi the pictures I took during my time at Adult Swim. Her response: "Maybe it's a good thing after all, that there's an adult night, daddy. That way, when I'm older, I can go there one night, too."

At Herron, Viewing a Sculpture Exhibit with a Wandering Mind

Angle / Edge / Plane: The Sculpture of Ronald Bladen at the Herron Galleries