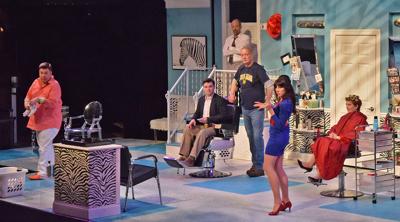 Re-Created from Paul Portner's original 1963 German script by a pair of U.S.-based theatre artists who recognized audiences savor playing the sleuth and sticking it to the character they least favor [or is it most?]. Flipping the switch on regular whodunnits, there's no sit back, relax and enjoy the show—attention must be paid, every action has a consequence, every detail sparks the motive for murdering a has-been pianist who is always heard, never seen. We in the seats decide who does her in, and it's going to be different every night because it is like real life—so much depends on the point of view of others with the loudest voice.

The audience around me on December 30, masked, attentive, was geared to pounce on the character to be hauled away, handcuffed, and unrepentant. In between the 5-star mimed opening scene inside a zebra-themed hair salon 'somewhere along Mass Ave.,' the teal highlights of Michael Layton's to-die-for set took on a deeper consequence. Shaun A. McIlquham's lighting paired with the trajectory of entanglements as six characters [in the many-layered sense of the word] entered and exited four doors amidst elevating mayhem.

Director Eddie Curry thrusts us into a mash-up of every theatrical genre with a strong suit for Improv by B&B actors who have no compunction against cracking each other up with scissor-sharp repartee and malapropisms. Expect something new for every performance up to February 5.

If you like the board game Clue, head on over—with strict health mindfulness-in-the-time-of-COVID-19, including when you're moving along the buffet with plates in hand to sample a menu created by newly appointed Executive Chef Larry Stoops.

In the United States, Shear Madness became the longest-running, non-musical play in USA stage history with a 40-year Boston residency at the Charles Playhouse. It closed on March 15, 2020. Productions in eighteen other countries have made Scherenschnitt an international hit. Except for Agatha Christie's The Mousetrap, Pörtner's interactive play is currently the longest-running play in the world, cited as "seen by 12 million people."

Pushing the logic parameters, the tightly knit company of six inhabits the Beef&Board stage with the zest of jaguars on the prowl. They'll turn on each other as readily as they toss off personal intimations for doing in the hapless pianist. Expect nothing less than highly cultivated snarls and snide humor from Jeff Stockberger, the cop not to be messed with; Daniel Klinger, the salon owner inhabiting a flair for the dramatic; his mercurial assistant Jenny Reber; the shady art dealer Michael Shelton; the oh-so-proper socialite Suzanne Stark—collectively reprising their roles from B&B's 2017 run of the show. David Buergler joins them as the hapless undercover cop with an above-average salon haircut endurance rating. Take note of Amy Gaton's costume design, along with the playlist Daniel Hesselbrock spins top to bottom. Logan Moore is deft with stage managing, as is Bill Mollencupp's technical precision amidst constant chaos.

Be forewarned—you get to vote once and only once at any performance you attend. Offenders will be ratted on by a nearby audience member—just like in real life.

In addition to his seventeen theatre plays, Pörtner wrote 20 radio plays. His original Scherenschnitt was reimagined as an arthouse drama film in 1983.