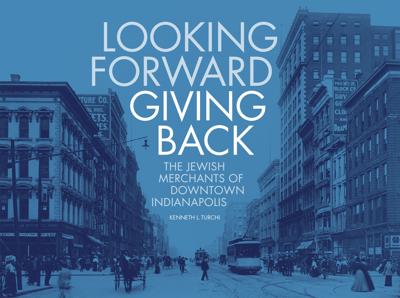 Looking Forward Giving Back: The Jewish Merchants of Downtown Indianapolis is a nod to Indianapolis’ initial relevance as a city with a thriving downtown as a place of commerce and of community life. People lived in the full sense of the concept within the original mile square. Kenneth L. Turchi here expands on his earlier L. S. Ayres & Company: The Store at the Crossroads of America.

In 1872, Lyman S. Ayres bought a controlling interest in H. A. Fletcher’s business that opened in 1851 at 26-28 West Washington Street. He renamed The Trade Palace to L. S. Ayres & Company and became part of Indianapolis’ already vibrant community of entrepreneurs setting a trend in clothing fashion and in household goods.

With his new book, Turchi takes us along the interconnecting links between families [including the Ayres family] whose stores were located within Indianapolis’ original mile square. The vibrancy continued for over a century until societal changes created a ‘flight to the suburbs’ and a whole new location concept of the retail industry drastically changed.

From the 18th century forward, the mercantile trade nationwide grew from peddler visits along a route to small home goods shops in a town, and ultimately to the department store and high specialty shops as a reason for everyone to polish their shoes, pop on a hat and generally spruce up to go to the city center and purchase the necessities no longer easily self-made or bartered. Connecting with friends was part of the routine, and long before cell phones, people could leave messages at stores to ‘meet me at….”  It was part of community service.

‘The Department Store,’ with clothing as the main attraction, has had the largest footprint in downtown Indianapolis, followed by home furnishing stores and jewelers along Washington Street. Turchi’s book does not furnish a city map, so I pulled one up via DowntownIndy [https://www.downtownindy.org/explore-downtown/maps/] and spotted the addresses along what originally was The National Road, bringing commerce from the East Coast, via Richmond, into Indianapolis, and westward to Terre Haute. Be aware there’s now a loop onto Maryland that was not part of Alexander Ralston’s original plan.

Family names going back to Indianapolis’ beginnings as a mercantile center are still part of our every day, individuals now serving in a range of professions and businesses, and industries. It will take another book to introduce the full story of people of the Jewish faith contributing to the development of Indianapolis,1820 forward. For now, we get to know the fifty-plus families whose names connect with downtown commerce in its heyday. However, by the 1960s, malls in the neighborhoods surrounding Indianapolis became the way to shop and those name stores migrated with the customer base. When I came to Indianapolis in 1983, I was told I could roll a bowling ball east or west along Washington Street and not risk hitting anyone once the office workers went home to their suburban neighborhoods.

Be prepared to earn a full-scope tutorial about Indianapolis’ retail industry. Turchi deftly weaves what translates into nearly two hundred years of successful business practices within a semi-gossipy iteration of societal interconnections. It’s the stuff of a PBS television series on par with British sitcoms —think “Mr. Selfridge”—with an Indianapolis backdrop of changing address numbers along Washington Street as store operations expanded and new names appeared.

The downtown department store families are covered in five chapters, introducing fully dimensional personalities as they navigate their ventures toward gaining a specific clientele, enticing loyalty, and building a community connection. Upfront, Turchi explains the principles of Tzedakah. Throughout are stories of being alert to a need before it bursts into a bad situation, or simply as a chance to share human kindness. Look for them and feel the spirit of “looking forward as merchants while giving back as individuals.” Turchi cites “The Efroymson story—hard work, success, generosity—[as] one of several that symbolize tzedakah at its highest form.”

We are introduced to William H. Block, who set aside his rabbinic training to emigrate from his native Austria to the United States in 1876. He soon was on the road as a peddler, devising “a harness that enabled him to carry two large suitcases at the same time across his shoulders, rather than in each hand.” He travelled the National Road to Richmond and New Castle, Indiana, doing repeat business stops from his East coast supply chain. Twenty years after arriving in New York in 1896, Block announced the opening of his store at 7 East Washington Street. The rest, as the story goes is history—ours, including a roster of Block’s cultural endeavors: The Hoosier Salon, the ongoing Quilt Contest, the Children’s Art Bazaar,….etc, etc

Chapter Four takes us to the H. P. Wasson & Company, acquired in 1912 by the Efroymson-Wolf Family. Diversifying as a part of smart long-range business planning especially plays out here. Another brand, The Star Store, “positioned itself as a lower-market, cash-and-carry establishment.” The list goes on to include The Real Silk enterprise. Wasson’s did not attempt to rival the elegant L.S. Ayres Tearoom, but it had its own charm and generations of faithful patrons. Read all about it …and abundantly enjoy page 75.

The Efroymson-Wolf community engagement is as diverse as their businesses—from supporting the city’s artists to growing our zoo and National Parks. Here I give full disclosure. Jeremy Efroymson provided performance space in the reclaimed church, at Delaware and 16th, for the Indiana American Indian Theatre Company formed by Rebecca Victorino Martin and Rita Kohn.

Walter and Joan Wolf are the presenters of the “Jewish Merchants of Downtown Indianapolis” exhibit that opens January 15 at the Glick History Center and are the underwriters of the book here reviewed. The giving does not stop when the store closes.

Innovation early on was embraced by the three leading department stores. Starting in 1935, “The College Boards” surfaced at Ayres, Block’s, and Wasson’s to assist graduating seniors with their college wardrobes and outfitting their dormitory rooms. There was a lull during the WWII years, with a return in 1946 that brought national attention to Indianapolis; Liberace at the forefront! With social change, 1968 is recorded as “The College Boards” final year. This chapter cites the opportunities afforded to college students through this community service, albeit being a smart marketing move.

We finally meet the earliest arriving Strauss family in Chapter Six. L. Strauss & Company opened in Indianapolis in 1853, following Charles Mayer & Company that was founded in 1849. Best read in full than commented upon, this is where chutzpah is reigns. And this is where learn how competitors work together for the good. The Strauss family inaugurated a 500 Trophy that has not been equaled anywhere else, in the same vein as they developed their fashion sense with “an all-star cast of international designers.” Wow. And then came the malls and the decline of downtown.

Henry Kahn opened a custom tailoring shop in 1886 at 14 East Washington Street. The address was 7 North Meridian Street  in 1960 when the family sold their base of operations to a national company, “leaving only the lettering on the side of the building,” citesTurchi. But their national imprint has continued as has their initial local concept of bringing into their operation newly arrived immigrants from throughout Europe who needed a start. Henry attended Butler and trained in tailoring under his father, Leon Kahn, the first person of Jewish faith to serve on the Indianapolis Common Council, 1869-1884.

“Davidson’s history goes back to 1885,” informs Turchi. “This chic and intimidating salon was the city’s main couture destination for more than a century.” This story revolves around the determined leadership of Sarah Davidson. When her husband Joseph died in 1929 at the age of fifty, Sarah took charge until their “sons Norman, Frederick and Herbert became old enough to aid in the management …as Davidson Bros.” The template repeats itself with Nellie, the widow of Fred. At her death in 2005 at age eighty-six, cites, “She was a woman of her era, one who was fiercely independent, knew no fear, and was ahead of her time.”

Turchi equally draws us into the stories of the Selig's, and of the Paul Harris stores developed as a partnership between Gerald Paul and Earl Harris. Of continuing consequence for us is the full page  “Profiles in Philanthropy: Gerald and Dorit Paul.”

Chapter eight introduces “The Home Furnishing Stores [that] for much of the twentieth century…congregated on the west end of downtown. As of the summer of 1941…along the south side of Washington between Illinois and Missouri Streets” customers could stop in at “Pearson’s Furniture (133), People’s Outfitting (143), Kirk (215), Ideal (227), Victor (231), and National (335)” furniture companies. Diversity of ownerships from department stores shows up here, along with new names. As I followed the advertisement Turchi shares, I gained another round of insights into categories of family budgeting and how stores managed lines of credit, and the concept of “thrift” vs luxury.

“Most of the buildings in the Furniture District were demolished in the late 1960s and early 1970s as the city imploded the Lincoln Hotel and cleared nearby land for the Indiana Convention Center, Merchants Plaza, and related parking lots and garages,” writes Turchi, taking us through the changing dynamics of Indianapolis’ downtown. Throughout, in telling the story of merchandising, Turchi takes us through the mainstays of architectural firms and builders who brought a distinctive look to our original city center, and to changes in succeeding decades throughout the second half of the twentieth century. Here, too, we learn about taste and what endures, and how succeeding generations viewed what makes Indianapolis a destination ‘someplace.’

“The Jewelers: Rogers, Rost’s, Goodman’s, and Windsor” closes the book, and we learn that eventually everyone we meet from page one to 176,  relocated to one mall or another in a round-robin, as early sites fell from favor and new locations gained precedence.

The book’s final nod to “Profiles in Philanthropy” shares how we as a city gained “The Blickman Education Trail Park” to unite Marott Park with Holliday Park”…and therein lies yet another book waiting to be written….who does what to unite us as a people and as a place.