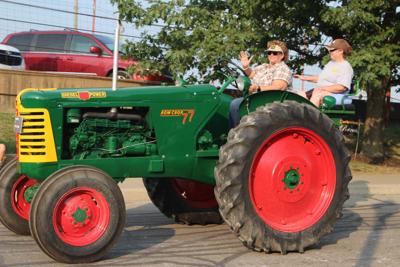 The Taproom at the 2022 Indiana State Fair is open noon-9:00 p.m., Wednesday through Sunday, in the Grand Hall across from the Indiana Farmers Coliseum.

Showcasing Indiana beer, wine, and spirits with tastings and sales by the glass is a spot to cool off, gather with friends [21+], or just kick back and hear music ensembles close up. The space is reconfigured with tall tables for standing and dining size tables—carry in something you pick up to share or eat solo along with Indiana craft beer, wine, and spirits. On media day, I was welcomed inside by two people spiffing up the entryway with obvious pride. No looking at name tags connected with the staffing and security team, please; just give credit to Big Momma and Dan the Man. Thank you. The beers on tap will rotate over the three-week run, bringing us into all corners of the state and the fulsome middle. Opening weekend pulls presented brews from Quaff ON!, St. Joseph, Four Day Ray, Chilly Water, Three Floyds, and Terre Haute Brewing. Indiana City, Triton, FLIX, Sun King, 18th Street, Metazoa, and Upland.

More reports are coming up.

“On July 29, the TTB issued the Notice of Proposed Rulemaking in the Federal Register and will enter a 60-day comment period for the public and industry to suggest changes to the proposed rules.

"Announcing American Single Malts as a formal category by the TTB is a historic moment for the industry, as it has been decades since a new whisky category of this magnitude has been added to the Beverage Alcohol Manual," said Virginia Distillery Company CEO and ASMWC Treasurer Gareth H. Moore. "The American whisky category was synonymous with bourbon just 15 years ago, but the resurgence of rye diversified that view. The American Single Malt category will further broaden the view of the American whisky consumer and fuel innovation and premiumization across domestic products."

The American Single Malt Whiskey Commission, established in 2016, Includes founding membership by Huber’s Starlight Distillery located at Huber’s Orchard, Winery & Vineyards in Starlight, Indiana. “We are proud to be producing brandies much as our ancestors did during the early 1800s. Master distillers Ted Huber, and Jason Heiligenberg, are committed to crafting brandies in the finest artisanal European tradition. Our estate bottled winery produces wines with intense varietal character that are hand distilled in individual batches allowing for the ultimate expression of the distiller's art.

Simultaneously, a news release came from the 2022 American Craft Spirits Association’s (ACSA) competition to determine the best of the best in craft spirits.

This year's ACSA competition included more than 450 entrants from 37 states.

The ‘Best of Class’ and ‘Best in Show' awards were selected based upon their numerical score, with the highest scores earning Best of Class / Best in Show distinction. Spirits were submitted in seven categories, including Whiskey (the most popular category), Gin, Rum, Vodka & Grain, Brandy, Distilled Spirit Specialty (DSS), and Ready to Drink (RTD). The awards are broken out into Bronze, Silver, Gold, Best in Class, Innovation Award, and the coveted Best of Show. The judging took place April 5-6 at High Wire Distilling Co. in Charleston, South Carolina. Altogether, the judging panel awarded 15 gold, 104 silver, and 159 bronze medals.

A complete summary of how the awards judging, scoring and medal criteria can be found here

In 2021, Three Floyds Distilling won seven medals: Gold and Bronze for Gin; Bronze for Rum; Silver and Bronze, each, for Specialty and Spirits.

August 5, the initial Big Woods location is reopening as Quaff ON! Pour House, at the intersection of Honeysuckle and Molly’s lanes, is just off the main tourist streets of Nashville, Indiana.

Along with their signature beers, the venue will offer craft spirits from sister brand Hard Truth Distilling Co. and an appetizer-centered menu developed by the Big Woods Restaurant Group team.

Like its predecessors, the Quaff ON! Pour House will be a 21-and-older venue with an

Founded in 2009 under the Big Woods Brewing Co. name by co-founders Jeff McCabe and Tim O’Bryan, who was the original brewer, the company currently operates ﬁve Big Woods restaurants, two Big Woods Pizza restaurants, a Hard Truth bar, and food and beverage operations at the Hard Truth Distilling Co. destination campus. The combined companies employ more than 600 people throughout the state of Indiana.

August 6, at 11:00 a.m., join Keep Indianapolis Beautiful at MashCraft on Delaware at 2205 Delaware Street, 46205 for a jog and some litter cleanup and then get rewarded with a beer from  Sign up at http://kibi.org/volunteer to hold your spot.

The Fall-time “Run For Beer and giving back to the community” series begins August 27 at Metazoa Brewing and continues on September 10 at Four Day, September 18 at Switchyard Brewing i  Bloomington, and October 15 at Guggman House Brewing, and October 29 at Scarlet Lane Brewing in McCordsville. All begin at 11:00 a.m. and end when you complete your 5k-isj fun-run course that returns you to the host brewery to celebrate with a pint and to gain some swag to take home.

Learn more and register at www.breweryrunningseries.com/Indiana.

On September 17, Easley’s Uncorked Wine 5k walk/run Festival starts at 1:00 p.m. at White River State Park. Choose from a handful of options to participate at your best level.

Metazoa emailed, “We have great news for you! Basic Bichons is back on tap. Inspired by the notorious pumpkin spice latte, Basic Bichons is an amber ale spiced with cinnamon and clove and then steeped on coffee and vanilla.

Check out their monthly stand-up comedy shows benefiting IndyHumane. “Admission is FREE for local and nationally touring headliners, but donations are greatly appreciated to support the doggos and the performers. Must be 21 or older to attend. Dogs are usually welcome at 140 South College Avenue, 46202.”

Flower Bond: Belgian-style Blonde Ale with Herbs and Honey, at ABV: 6.2% IBU: 10, promises, “Your spirits will blossom when you pick Flower Bond, our latest Belgian-style blonde ale...starts with an easy-sipping, malty body brewed with local clover honey before steeping with freshly picked, bountiful bouquets of lavender and elderflower.

Imperial deFallt® Amber Ale with Maple Syrup, Honey, Spice and Amburana Oak at ABV: 9.0% IBU: 22 is part of their Unlock the Vault series “committed to the careful, prolonged conditioning of wood-aged ales.”

Indiana City Brewing Co.'s newest in their Sours Series, Queen of Tart [5.5% ABV], is fruited with real cherries. On tap at 24 Shelby Street, Indianapolis 46202, along with their classics, three other series brews, ales from the crypt, and limited releases, including  POST Festival session IPA, Rye Saison, and Wicked Reaper local harvest IPA.

Ash&Elm announced ’Tea and Lemonade’ as their August specialty. “Made by infusing our semi-sweet cider with local cold-brewed black tea and fresh squeezed lemonade, it'll bring a smile to your face and some pep to your step. Please note - we encourage ice and a straw for this one. Go to 1301 East Washington Street, 46202.

New on tap and in cans is Hiking Buddy Session NEIPA. The notice reads, “We first brewed this back in September 2019.  This session hazy IPA stars Lemondrop hops and starts with notes of citrus and orange peel, followed by hints of lemon zest and light melon. It has a soft round mouthfeel and a light lemony finish; the perfect accompaniment to a hiking day at 5% ABV.”

The free and family-friendly Oktoberfest runs September 16-18, with events in the Taproom, Festhall and Beer Garden.

September 23, 4:00-11:00 p.m. and September 24, noon-11:00 p.m. at Primeval Brewing, at 960 Logan Street, Suite 100, 46060, “Don your finest Lederhosen or Dirndl, and join us for the 3rd Annual Primeval Oktoberfest. This year's event features the release of two special Oktoberfest style beers: the traditional amber Oktoberfest (Marzen) and the lighter Festbier style.

Ken Torisky at the National Inventors Hall of Fame reminded me to post this notice: “As you celebrate National Beer Lover’s Day on Sept. 7, be sure to raise a bottle to toast William Painter!

“William Painter invented the crown bottle cap in 1892. Crown caps, both pry-offs and twist-offs, are still used today. The crown cork bottle cap had a corrugated-flange edge and was lined with a thin cork disc and a special paper backing to seal the bottle and prevent contact between the metal cap and the drink. It was simple, economical to produce and leakproof. After working with bottling manufacturers to develop a universal neck, Painter invented and patented all the machinery needed to manufacture the caps.

"Thanks to ongoing improvements to Painter’s original design, beer lovers everywhere can store and enjoy their favorite beverage without fear of spoilage.

I asked Ken Torisky to expand on his initial email.

“invent.org is the National Inventors Hall of Fame website,” he explained. “Founded in 1973 in partnership with the United States Patent and Trademark Office, NIHF is committed to not only honoring the individuals whose inventions have made the world a better place but to ensuring American ingenuity continues to thrive in the hands of coming generations through our national, hands-on educational programming and collegiate competitions focused on the exploration of science, technology, engineering, and mathematics.”