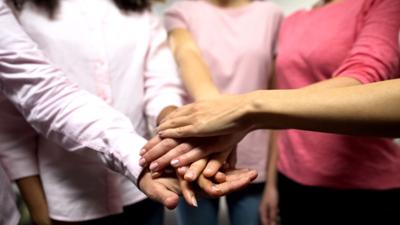 January 16, 1920, Indiana was the 26th state to ratify the 19th Amendment to the U.S. Constitution. Seven months later the required number of states to ratify was reached. On August 18, 1920, the 19th Amendment was confirmed; women were granted the right to vote on all aspects of local, state and federal elections.

The evening of January 15, 2020, Phoenix Theatre, in collaboration with Indiana Coalition to End Sexual Assault & Human Trafficking, Women4Change and El Tendero/The Clothesline Indiana, launched its year-long women’s empowerment programming. The presentation of “tight end” by Rachel Bukowski, kicked off a full audience conversation surrounding the “continuing struggle” for equality for all genders.

January 16, at the Statehouse, Lt. Governor Suzanne Crouch and members of the Indiana Women’s Suffrage Centennial Commission , including the Indiana Historical Society, Indiana Historical Bureau, Indiana Humanities and the Indianapolis Propylaeum celebrated the 100-year anniversary of Indiana ratification of the 19th Amendment.The Commission formed by  House Enrolled Act No. 1394 in July 2019, encourages local communities and organizations across Indiana’s 92 counties to commemorate the centennial anniversary of women’s right to vote.

Indiana Historical Society’s year-long programs reach out across a spectrum of interests:

Feb. 6, 7-8:30 p.m., the Eugene & Marilyn Glick Indiana History Center launches “How Do I Count,” a 4-part series on the U.S. Census and its ramifications. Gerrymandering is the first topic. Upcoming topics: April 16, Census; September 3, Voting; October 8, Electoral College. Admission is free for members and students, $5 for the public.

Feb. 27, 6 p.m. “A Toast to Now”: An evening dedicated to celebrating women and the 100th anniversary of the passage of the 19th Amendment includes a keynote from author and Walker descendant A’Lelia Bundles and a panel discussion featuring top female leaders from the community. Also check out the Madam C.J. Walker Digitization Project, and the original collection at the William H. Smith Memorial Library at the History Center. More information & register here: https://indianahistory.org/events/a-toast-to-now/

The traveling exhibit, “Securing the Right to Vote: Women’s Suffrage in Indiana” traces activism forward from 1851, when “Amanda Way, a Quaker from Randolph County, decided it was time to talk about women having few legal rights and no political power. She initiated the first Indiana Woman’s Rights Convention in Dublin, Ind.” You can catch the exhibit at the Kurt Vonnegut Museum & Library, Aug. 25-Sept. 29, 2020.

Co-incidentally with Indiana’s ratification of the 19th Amendment, on January 16, 1920, the 18th Amendment took effect, banning nationwide manufacture, transportation and sale of intoxicating beverages. “Morality. Piety. Domesticity. These are all words that framed both the fight for women’s right to vote and prohibition at the turn of the 20th century. Both movements go hand in hand, aiming to deeply divide or unite suffragists in their crusade to fight for these two amendments.”

February 8, 1:30 p.m. at the Indiana History Center join panelists Jessica Derleth of Binghamton University, Anita Morgan of IUPUI, Lori Osborne of the Frances Willard House Museum and Archive, and moderator Jessica Jenkins from Minnetrista, for a conversation on the intersection and complexities of these two movements. In partnership with the National Women’s History Museum. Register at: www.indianahistory.org

Stop at the History Market to pick up “Fighting for Equality: A Life of May Wright Sewall,” by Ray E. Boomhower, and visit the new “Destination Indiana: Indianapolis Woman’s Club” exhibit.

“Protect the Vote” exhibit is open now and runs until November 3, 2020 at the Benjamin Harrison Presidential Site, Call 317-631-1888; or go to presidentbenjaminharrison.org

March 13 & 14, at 7 p.m., at The Propylaeum Carriage House, witness “Digging in Their Heels: an energized eye-opening story of women’s battle for the vote.” Tickets at: www.thepropylaeum.org/upcomingevents

November 7, at 6 p.m. at The Indianapolis Propylaeum, “Ain’t I A Woman? The Evolution of Women in Politics” explores the segregated aspects of women and suffrage. It’s a 13- organization partnership. register at: www.spiritandplace.org

March 5, Women4Change event at the Indiana Statehouse at Noon. Clotheslines will be erected in the South Atrium and completed postcards sexual assault and domestic violence survivors from all over Indiana will stay up for two weeks after the event. See all events here: https://indianacesa.org/wp-content/uploads/2019/10/EVENTS-1.pdf;   https://www.women4changeindiana.org

“Protect the Vote” exhibit is open now and runs until November 3, 2020 at the Benjamin Harrison Presidential Site, Call 317-631-1888; or go to presidentbenjaminharrison.org

March 13 & 14, at 7 p.m., at The Propylaeum Carriage House, witness “Digging in Their Heels: an energized eye-opening story of women’s battle for the vote.” Tickets at: www.thepropylaeum.org/upcomingevents

November 7, at 6 p.m. at The Indianapolis Propylaeum, “Ain’t I A Woman? The Evolution of Women in Politics” explores the segregated aspects of women and suffrage. It’s a 13- organization partnership. register at: www.spiritandplace.org

April 3, at Noon, at the Eiteljorg Museum of American Indians and Western Art, Curator’s Choice Tour and Talk will focus on Susan Hudson’s quilt, Missing and Murdered Indigenous Women since 1492.

Spring 2020, “Women Writing, Women Heard” will feature workshops in Drama, Fiction, Memoir, and Poetry, at the Indiana Writers Center, located in the Circle City Industrial Complex. To be notified when registration for the workshops open, email

Spring/Summer 2020, The Indiana State Museum will conduct programming in conjunction with an exhibition of Indiana women artists who advocate through their art.