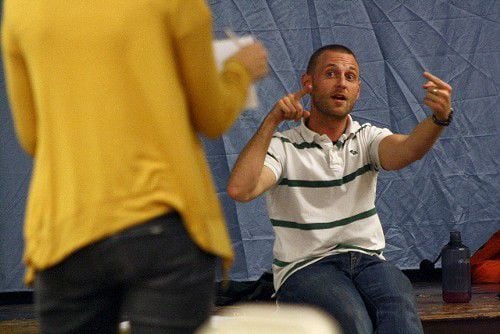 Michael Bachman suggests trying it the other way. 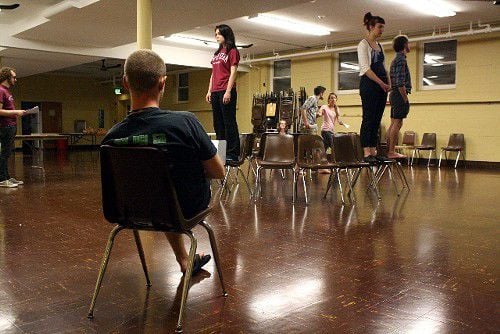 The NoExit crew at work on 'Oedipus at Colonus.'

Michael Bachman suggests trying it the other way.

The NoExit crew at work on 'Oedipus at Colonus.'

This spring, NoExit Performance Company will mount the entire Oedipal play cycle (Oedipus Rex, Oedipus at Colonus and Antigone) on the grounds of the Indianapolis Museum of Art, with a single cast presenting all three plays. Have the members of this relatively young theater company bitten off more than they can chew? Katelyn Coyne, NUVO theater writer by day and a member of the chorus for all three plays by night, is effectively answering that question by blogging every other week about the rehearsal process. This is the third installment.

Most are familiar with the stories of Oedipus Rex and his tragic daughter Antigone; less well known is Oedipus at Colonus, which falls second in the timeline of the plays, but was the last to be written by Sophocles, shortly before his death. In it, the blinded Oedipus flees Thebes with his daughter, Antigone.

Director Michael Bachman has fearlessly led our crew over the past three weeks. With the play fully-blocked and last-minute actor substitutions in place, this rehearsal process has been extremely truncated. Yet, his razor-sharp focus keeps him productive in the face of these challenges. Here is what he has to say about the process thus far:

Coyne: How do you view Colonus in terms of the whole trilogy?

Bachman: It's really to connect the dots, and you can tell that by all the prophecies that are in it. I mean it's obvious that the trilogy had ended, the story had ended, and this really was after-the-fact. [Sophocles' original] audience must have wanted to know what happened. Otherwise, why would Sophocles sit down and pen it? With that, we can find great purposes in the piece. If NoExit had decided to just produce the two, I think people would've ended up with the same questions. Our focus is to help the audience make those connections.

Coyne: What was your entry point for this script?

Bachman: Knowing that it was written after the other two just to kind of fill in the gaps left me, at first, very stagnant. The biggest battle for me to fight was how am I going to make it so it's not stagnant ? For the most part, explanation is not interesting. But I really liked the fact that Oedipus was a rock. He doesn't move a lot; the action just comes in around him. It's going to be very different from the other two pieces that travel so much. And it being the midpoint, the audience comes to a place of rest, for a little bit, in the same way that Oedipus does.

Coyne: I've read that Sophocles wrote this during the last years of his life. Do you think perhaps he was trying to understand his own impending death by writing about Oedipus?

Bachman: There's a lot to that. Something that we're finding in the rehearsal process is that, even more so then in Antigone or Oedipus Rex, these characters are very human. That's not something we always see from Sophocles. We usually saw inflated caricatures of possible historical figures or tragic figures... that kind of idea. [In Colonus] everyone is very human. There are not a lot of big fights; there is not a lot of offstage action. Though I haven't read that, it makes a lot of sense. For him and the people around him to understand his own death. And possibly to go out in the same quiet way that Oedipus does.

Coyne: With so many obstacles, rehearsing with a partial cast, you've been able to stay so focused and actually get work done. How do you do that?

Bachman: My professional life has built me to do that, just remaining flexible, going with the flow. I also came in with a plan of how to do it. I had in my head a very clear vision of how it was going to go. So I can very easily scratch something, because of scheduling conflicts in rehearsal, and go on to something else. That's what made it so easy and fluid for me.

Coyne: What has been your personal biggest challenge so far?

Bachman: As I director, I think about my performers a lot. Their biggest challenge is not always having their co-actor on-stage. It's difficult to try to pull things out of them, even though there is no one acting with them. Also when I step into a role for them, I can't see everything that's going on, but I'm still trying to give everything that I can, so atleast the other actors have something to pull from and use.

Coyne: How do you bring your foundation as a director of abstract, visually striking pieces (Sarah Kane's 4:48 Psychosis) to this more traditional Greek tragedy?

Bachman: I'm hoping to find those images for this piece, but I think those images are more in the words. In 4:48, the images are what lasts. But in this, its going to be the words of Oedipus and the other characters that last.

Coyne: The most striking image so far is the presence of all the characters who die throughout the trilogy around our fountain. Where did that come from?

Bachman: Oedipus was part of so many people's lives. I wanted to find a way to bring all that in. A large portion of a my master program was in a Greek tragedy class. My professor was very interested in was the decaying body on stage. What would it be like in all theses Greek tragedies if, when someone died, the body just stayed there, and we as an audience watch the way that body changes our perception of the people left alive onstage? If we get to look at Jocasta's body instead of just talk about it? I thought that might be a great tool for this, so we could see everyone Oedipus touches and also see that humanity of him caring for them.