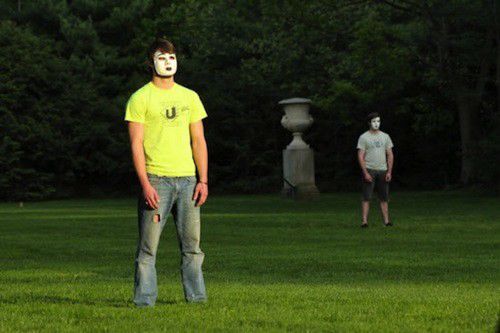 Logan Moore and Matt Goodrich as Eteocles and Polynices. 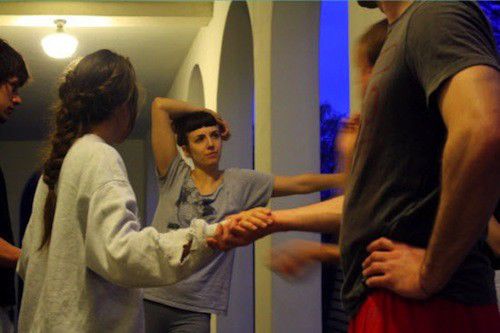 Georgeanna Smith speaks to the cast of 'Antigone' at the Lilly House.

Logan Moore and Matt Goodrich as Eteocles and Polynices.

Georgeanna Smith speaks to the cast of 'Antigone' at the Lilly House.

This spring, NoExit Performance Company will mount the entire Oedipal play cycle (Oedipus Rex, Oedipus at Colonus and Antigone) on the grounds of the Indianapolis Museum of Art, with a single cast presenting all three plays. Have the members of this relatively young theater company bitten off more than they can chew? Katelyn Coyne, NUVO theater writer by day and a member of the chorus for all three plays by night, is effectively answering that question by blogging every other week about the rehearsal process. This is the fifth and final installment.

The third piece in the Theban puzzle is Antigone: the show that started it all. The success of NoExit's 2009 production of the play was a major impetus in the company's decision to undertake this massive project.

"Some of this is purely business," says Georgeanna Smith, NoExit artistic director and director of Antigone, "because [Antigone] did well. It got good reviews and most importantly, it attracted people that didn't know us. When the board first mandated that we do some classics, before I joined NoExit, that's what they hoped: it brought new audiences in."

It's not uncommon for local theatre troupes to remount successful shows, including Q Artistry's Cabaret Poe, Acting Up Production's Night of the Living Dead and the IRT's A Christmas Carol, just to name a few.

"Every time we have a show that goes well, or that we're proud of, we're like: 'Let's do it again sometime.' Antigone went into that box," Smith says.

When Michael Burke (Oedipus Rex director) approached NoExit with the idea to mount the entire Oedipal play cycle, Smith thought she had it made.

"I thought, 'I can just remount what I already did.' I always tell myself its going to be so easy, and then I change a billion things," Smith says. "It's been problematic, because we didn't videotape this, and I didn't take great notes and no blocking notes exist."

Thankfully, Smith can rely on the memories of cast members involved in the 2009 production. Michael Hosp is reprising his role of Creon, and both myself and Michael Burke were cast in different roles during NoExit's 2009 production of Antigone.

"It's been fun to recreate with almost an entirely new cast, to revisit and have it be a little more collaborative in that way," Smith says. "But it's been an interesting challenge to figure out when its okay to tell myself 'Yeah, whatever happened last time worked and you remember you liked it, but you don't know what it is anymore.' And to be okay with that."

However, Smith's original concept for the show - to focus on the dead - is very much intact. Dead brothers Eteocles (Logan Moore) and Polynices (Matt Goodrich) guide much of the action of the play.

"When I read the script I found the brothers so interesting. Who are they?" says Smith. "Antigone loves them, but she's had such a messed up family life and now they're dead. Later you hear about how awful they were, and then you learn that they killed each other. I had all these thoughts about the brothers. And then I thought, what if they were just really present? And that developed into what if they really controlled the action?"

Now, the dead play a major role in each of the three plays. In fact, the climbing death toll and the continued presence of each character after their death is arguably one of the strongest linking factors between the three plays.

"The dead are so important." says Smith. "The battle between [the brothers] didn't stop when they stabbed each other in single combat. It continues to this point as they fight for Antigone, as they fight to claim the position of hero and martyr. They just keep fighting until the end."