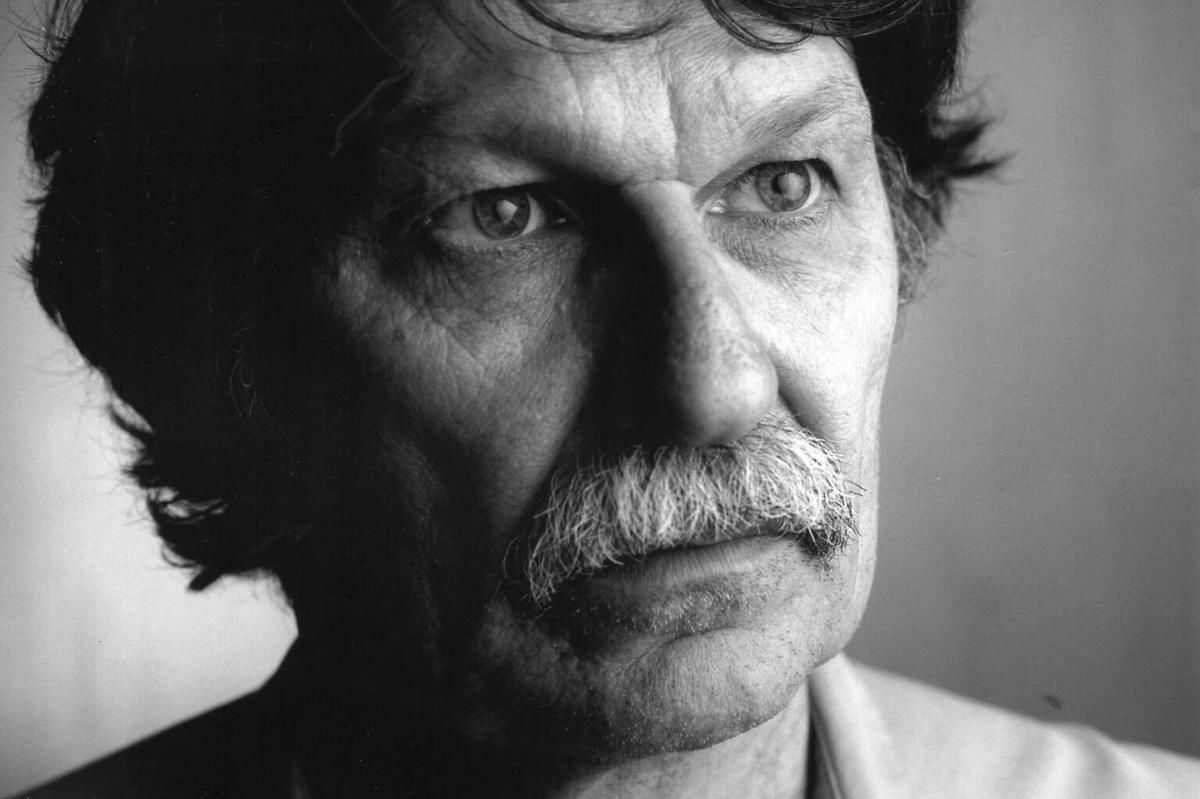 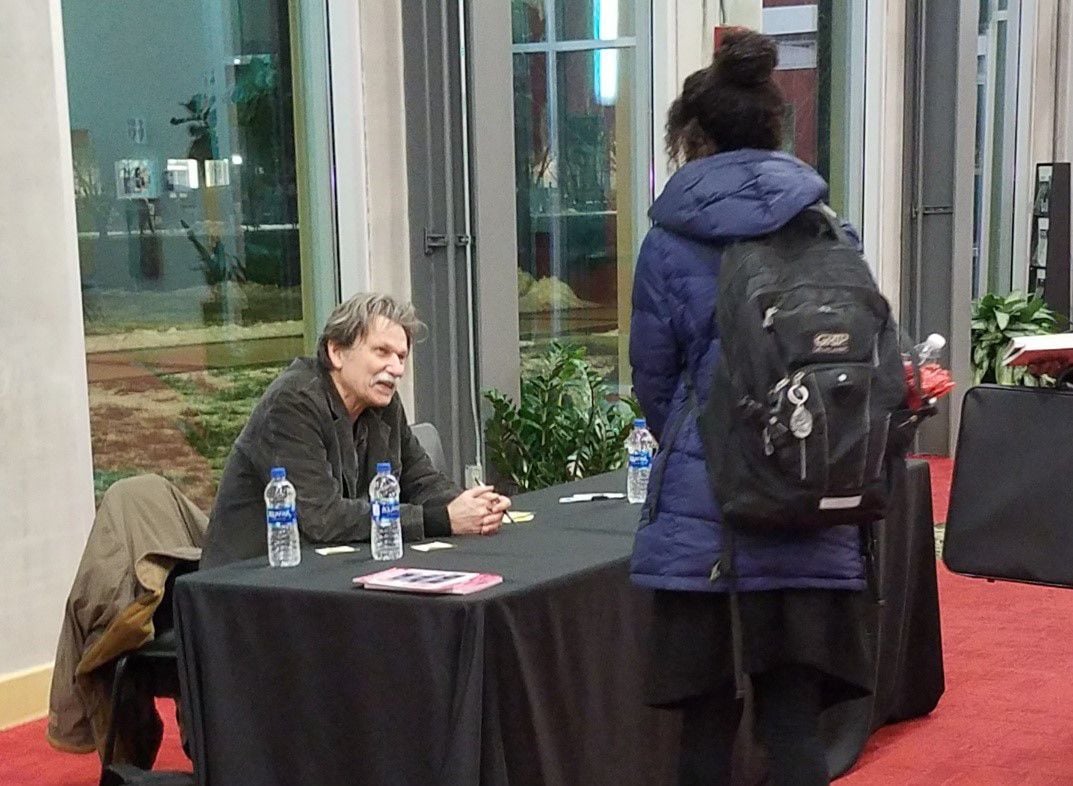 Gregory Orr signing books at the Schrott Center for the Arts

“If your experience in the world is lucky, then you’re going to write celebratory praise poems,” said Gregory Orr, minutes after he came up to the podium at the Schrott Center for the Arts on Jan. 22.

Orr is the author of 11 collections of poetry, and professor of creative writing at the University of Virginia in Charlottesville.

“If you’re not so lucky in life,” he continued. “there will be the task of redeeming the tragic or the traumatic and bringing it into the utterable.”

Orr hasn’t always been so lucky. When he was twelve years old he shot his brother dead with a .22 in a hunting accident. What makes this shooting even more tragic is that Orr’s father, who had given him the rifle, had himself accidentally killed his best friend when he was 13 years old.

He relayed these experiences in the very first poem he read, titled “Song of What Happens.” It’s from his forthcoming collection The Last Love Poem I Will Ever Write.

He read the following from that poem: “That kind of coincidence isn’t credible in fiction, Much less in a poem, where you’re not allowed to describe too much and explain or ascribe motives because each word is precious.”

Those words struck me.

It wasn’t just because, in a reasonably short poem, Orr was able to bring a personal and family tragedy “into the realm of the utterable.”

He was also able to talk about fate, God, and writing itself.

The poem made me think of a recent article in The Guardian titled “Poetry Sales Soar as Political Millennials search for clarity.” The essential point of the article was that poetry is increasingly seen not just as a way to passively reflect on current events but to be actively engaged with them.

It also made me think of three recent spoken word events that I had attended in Indianapolis. At these events I’ve been struck by the the young performers who are also community activists, consider their poetry inseparable from their activism, and are attempting to create a community with their words.

That is, I felt that Orr has a few things in common with these performers.

There is, first of all, a confessional nature to many of the poems he read as well as a simplicity and clarity to much of his language.

And Orr’s work doesn’t come across as academic even though he is an academic.

And like a good number of Indy’s spoken word artists, he isn’t afraid to engage politically.

The most civicly-engaged poem Orr read was “Charlottesville Elegy” which refers to the deadly Unite the Right rally that occurred in Charlottesville Aug. 11-12 2017.

In the poem, Orr describes an eye hanging over Charlottesville, where he has lived for more than 40 years:

“It isn’t the bitter eye of racism which haunts alleys and grocery lines nor the icy eye of privilege; I’ve seen that many times shining above the university…”

The last lines of the poem “If you’ve closed your eye to evil, you’d better not blink,” seemed to conjure up the spirit of Donald Trump, although it didn’t mention his name.

And while Orr didn’t otherwise delve into left-wing politics, he did delve into the subject of left handedness in his Nerudian “Ode to Left-Handedness.”

Here, he related the experience of trying to cut construction paper with scissors in kindergarten, while being too young to understand that the scissors were “biased” against him.

Being a lefty myself, I have similar memories from elementary school.

Orr talked a lot, engagingly, between his poems. His  M.O., he said, was to move from the darkness to the light thematically during his reading.

But once we got to those lighter poems, I felt a little like I had felt while being stuck in the middle of Paradiso, the last book in Dante’s Divine Comedy, after having read his Inferno and Purgatorio.

I had been gripped by the tortuous passages of the first two books, but with Paradiso I got a little bored by the celestial rings of singing angels.

That’s sort of what happened 35 minutes into the reading when he started to read his poems about “the book” and “the beloved.”

He calls his book  “a cosmic jukebox the size of the moon”  containing every song and poem ever written. “We download the poems we need to live” from it, he said.  He description of “the beloved” was even more ethereal.

That is because Orr looked up at the audience more than a few times, towards the end of the reading, and seemed a little perplexed. He also asked us why we weren’t laughing—as if he were a stand-up comic who had fumbled the punchline.

I blame social media for adversely affecting my ability to concentrate. That’s my excuse. I blame the president’s tweets.  But I also have to say that an hour is a little long for a poetry reading.

The audience, however, perked up again during the Q&A session afterwards.

During one of his responses he equated poetry with song.

“The greatest experience of my life as a poet so far was two months ago, when I worked with three sisters who were a singing group, the Parkington Sisters at the Dodge Poetry Festival,” he said. “And we did these ‘Beloved poems’ as a 50 minute song poem cycle. God that was so beautiful.”

Iconoclast at the Irving Theater

What space should poetry occupy in publications, and in public discourse? Dan Grossman raises that question and offers up a poem of his own, based on his experiences at Indiana Dunes National Lakeshore.