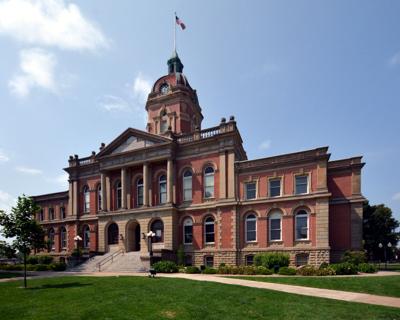 Yet there’s something more than scary stories in this collection, strung out like unwashed laundry. What respectable citizen wants your county-seat town or city known for the dastardly, unthinkable, unspeakable things your neighbors and your kin do?  Why dredge up these century-old horrors once again? What rage lures a mob to vigilante violence against a person falsely accused and denied a fair hearing, and yet is sanctioned by a culture that makes it OK to let the perpetrators go on living free of punishment?

“The county courthouse — revered as the center of the community, the citadel for justice, has at other times become the bloody setting for the settling of raw human emotions. In an instant, the prestige and distinction of the courthouse is reduced to a violent battlefield,” Stoner writes in his introduction.

What mitigated the ugliness in the reading in Stoner’s descriptions of our basest qualities are his even-handed descriptions of each courthouse as a structure of community pride — and as a reservoir of underhanded machinations. Always follow the money when you wonder about our nation’s structuring of political power. Along with Stoner’s retelling, there’s a photograph of every courthouse — often the anchors of the surrounding town square.

I reached out to Andrew Stoner for an email Q&A:

KOHN:  What intrigues you enough about the role of the county courthouse to write this book? And by extension to share images of the structures and their architectural properties?

STONER: My interest in the courthouse as a setting for crime and other bizarre or untoward moments was prompted by my experience in courthouses, big and small. As a newspaper reporter for The South Bend Tribune, I often visited courthouses in northern Indiana to cover my stories about various criminal trials, or even county council or commissioner’s meetings. When I joined the Indianapolis Police Department as their civilian PIO [public information officer] (1989-92) I was struck by just like in small-town Indiana, the halls (and elevators) of the massive City-County Building were filled with an interesting mix of some of the community’s most powerful individuals right next to those facing fines or incarceration. The contrast always struck me as rather stark.

I also must note I grew up in a “county seat town,” Goshen, Indiana, the county seat of Elkhart County. The courthouse is the centerpiece of that community, just as was the Johnson County Courthouse in Franklin where I attended college (Franklin College). It occurred to me that the community pours so much of itself into the courthouse, a symbol of the county’s largesse, or even its frugality in some instances. It is the place where civil and criminal matters are decided and is supposed to be, in my mind, a space respected and treasured by all citizens. When it is not, when the courthouse becomes the backdrop to human ugliness, my attention is captured.

KOHN:  The division between white and black cases is poignant. What propelled this stark editorial choice

STONER:  That was not by design, but by necessity. The ugly reality of lynching has been, as history shows, a terrible crime committed almost exclusively against African-American men and women. As a result, the victims of the brutal mob justice displayed at each of these courthouses are black, while perpetrators are white.

The book is actually a smaller portion of a larger manuscript. I am hopeful the publisher and I will see success with this volume, allowing us to go forward with already written texts about courthouse cases involving actual homicides committed inside courthouses, bombings carried out for various reasons, ugly domestic disputes where families have disintegrated at the courthouse, dramatic escape attempts (successful and otherwise), and long-term feuds and grudges (including overheated political rivalries) that come to a head at the courthouse. My hope is that this book is the first of a three-part volume.

KOHN: What do you intend as a significant take away for a reader?

STONER: Readers are drawn to such subjects for many reasons   obviously true crime aficionados will find plenty here to draw and keep their interest. But I think most anyone who respects the rule of law and either admires or is curious about the county courthouse will find this informative. Most of all, I hope those moments of “broken trust” between the community and its citadel of justice will remind us all of the vulnerability of human life, and the importance of insisting upon the preservation of this reserved, respected place for adjudication of human interaction — the courthouse.