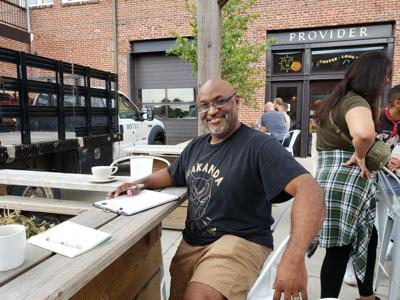 Maurice Broaddus continued racking up the honors recently when he was announced as one of the winners of the 2020 Eugene and Marilyn Glick Indiana Authors Awards.

His book, Pimp My Airship, won in the Genre category. There were eight winners in all, ranging from drama to nonfiction.

Broaddus has had a good run this summer, including an announcement from AMC Networks that it will adapt his novella, “Sorcerers,” into a TV series. Plus, HarperCollins recently published the paperback edition of his 2019 young adult novel, “The Usual Suspects.”

But the Indiana Authors Awards is a special one.

“It’s been on my radar probably for as long as I’ve been publishing books,” Broaddus said.

Winners receive $5,000 and an opportunity to make a $500 donation to an Indiana library of their choice.

Broaddus, a middle school teacher at The Oaks Academy, said he has several speaking invitations from middle schools in his inbox right now. It’s part of what comes along with a string of honors, and Broaddus sees it as an opportunity to fulfill part of his mission as a writer: being active in his community.

It doesn’t make authors like Broaddus a liar when he says he doesn’t write for the fame or recognition. Awards equate to credibility, and authors — plus actors, athletes, politicians and so on — can choose what to do with that.

“Pimp My Airship,” published in 2019, follows a spoken word poet called Sleepy, who, along with finding himself on the wrong side of the authorities in this sci-fi Indianapolis landscape, is learning how to use his gifts for good.

The book is in the steampunk genre, which incorporates advanced technology in a Victorian-era setting. That’s code for “we’re gonna exclude Black people as much as possible,” Broaddus said, so he wanted to revisit the city’s racial history, including the rise of the Ku Klux Klan and redlining.

• Phillip Hoose (children’s) for “Attucks!: Oscar Robertson and the Basketball Team that Awakened a City”

• Melissa Stephenson (emerging) for “Driven: A White-Knuckled Ride to Heartbreak and Back”

• Chris White (fiction) for “The Life of Adrian Mandrick”

• Ross Gay (nonfiction) for “The Book of Delights”

• Eugene Gloria (poetry) for “Sightseer in This Killing City”