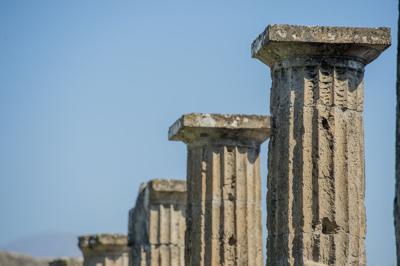 Priestess of Pompeii: The Initiate’s Journey Book I, Sandra Hurt’s debut novel, easily could have taken the Oedipus route forward from infant abandonment to tragedy. Hurt, however, moves the story of the newborn Rufilla along a complexity of pathways to plumb a scenario closer to the story of Moses. Herein, we are led to consider the underlying concepts of ‘fate’ and faith, prophecy and prophetic calling, destined’ and destiny, providence and provide.

Be assured, at the forefront of Rufilla’s coming-of-age story is Hurt’s engaging panorama of Pompeii and its surrounding sites and cities, trade routes and industries before 79 A.D., before the tragic events of Mount Vesuvius buried the flourishing city, scattering those who could flee, encasing in hot lava those who could not.  Hurt builds an epic with what is known and what eventually is surmised about Pompeii, based upon excavations that began in the mid-18th century.  One can fill many shelves with already published books about Pompeii — both those conjectured into fiction and those specified through research. What compelled Indiana-native Hurt, some thirty years ago, to undertake a quest to produce this richly nuanced life of a free-spirited child who grows into a young woman called to a life of spiritual service in the ancient world of the First Century BCE?

Hurt reveals, in an author's note, “In 1991, I was introduced to the meaningful world of ancient women’s rituals, ones that we as westerners have all but forgotten…When I saw the frescoes from the Villa of the Mysteries [in a slide presentation], I was transported out of space and time, never to be the same…”.  In peeling back the layers of Pompeii, based on archaeological research, Jungian psychology, and her personal visits to sites and research centers, Hurt carries a reader into an imagined daily life over a period of some fifteen years.

Hurt’s vivid verbal descriptions of Pompeii and environs pulled me back into the Dr. Who episode that initially aired in 2008, with its re-imagined depictions of natural and built environments.  Dr. Who, we know, is a Time Lord with a distinctive ability to see the past, present and all possible futures all at once.  When Dr. Who and companion Donna, through a technological glitch, erroneously land in Pompeii in late Fall of 79 CE, they are in a destiny trap—Pompeii on that day is in a fixed point in history. Contrary to the overall arc of Dr. Who episodes,  this time Dr. Who has no ability to stop a course of action or reverse one already in process. What I vividly remember is this mantra, “What happens, happens.”

While the pace is more subtle, the unfolding less embattled, nevertheless the breath of The Fates now feels as imminent in reading Hurt’s novel as it did when I viewed the Dr. Who episode a dozen years ago. Can there be a discernible logic to why events spin out as they do—as in ‘for every action there is a reaction,’ or can there be any number of conjectures when one looks back, as to why events unfolded as they did? This conjecturing brought me back into the Pompeii site-specific work of artist Silvana LaCreta Ravena, who creates hidden and revealed scenarios through a process of encaustic and oil layering.

As Hurt embraces us within her quest to learn about the lives of women ‘in ancient times,’  we are in the throes of her twists and turns; we are alongside her, observing a rescued infant being raised in a well-to-do home, surrounded by lovingkindness. As with King Oedipus and the Prophet Moses, Rufilla has a marked physical challenge around which she must navigate her life. But unlike Oedipus, whose feet intentionally are hobbled, Rufilla, as was Moses, is born with a ‘disability’ and these distinctions play into a different kind of destiny. Embarking along with Rufilla upon a journey of self-discovery,  we too can gain insights that lead to wisdom. We never are too old to seek, nor too entrenched to become more, nor too infirm to rise within the capacities we have.

What Hurt gifts is a page-turning past that feels very much present.  Told as a straightforward account of what is happening in the moment, nevertheless one feels an element of divine Providence as Rufilla, the throw-away-infant rises to essentially. The truism: human beings, no matter when or where, harbor within themselves the need to know that they matter, they are cared for, they are not insignificant in an indifferent social order, they have a place as a contributor to the well-being of others and to society as a whole. In whose hands is our life force? Are we pawns bemoaning our station or are we actors cognizant of the challenges and opportunities?

I await Book II, just as I invite you to journey into Book I of Priestess of Pompeii: The Initiate’s Journey.

Carmel, Ind.-based Hawthorne Publishing, on its website, describes Hurt as “a perennial and peripatetic student” who has “studied Jungian Psychology, and taken many classes in the Classics. Her research trips have allowed her to work with historians, archaeologists, and art historians in the U. S., Italy and Greece, giving her a rich education and love for all things related to women in the ancient world.”