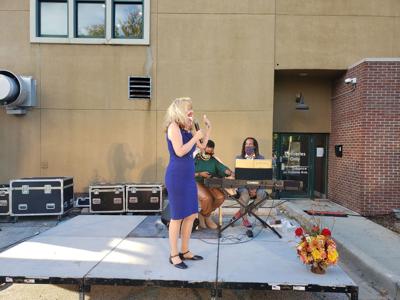 On the evening of Oct. 1, at Kurt Vonnegut Museum and Library, two Hoosier literary luminaries —  Manon Voice and David Hoppe —  talked about the importance of Kurt Vonnegut not just as a great fiction writer but as an engaged citizen.

The fundraising event, which required masks except when eating and imbibing, took place on the Vonnegut Library’s ground-level outdoor patio.

Manon Voice, the Vonnegut Library’s “activist in residence” for Banned Books Week, talked about the tradition of poetry and writing that she belongs to, a tradition that includes the first African American in the New World to publish a book of poetry, Phillis Wheatley. She reminded the audience that it was illegal for Blacks to read and write at one point in American history due to anti-literacy laws in many slave states.

She then spoke of the importance of Kurt Vonnegut to her life as a writer and an activist.

(NUVO’s Seth Johnson has an upcoming interview with Manon.)

David Hoppe, who appeared to the fundraiser patrons via flatscreen virtually from his Michigan City residence, talked about Vonnegut’s importance not only as a fiction writer but as an engaged citizen before reading from his new play WordPlay. He also talked about the importance of Indianapolis, where Vonnegut was born, in his work.

Last Day of Banned Books Week at the KVML!
On Saturday, October 3, 11 am to 12 pm, check out the free virtual events! Release of KVML’s literary journal So It Goes with contributors and artists reading and showing their work. 12 pm – 3 pm. Youth Writing Program Open House with workshops including Writing for Graphic Novels with Ryan North; Writing for Change with Lasana Kazembe; and Writing for Fun with John David Anderson. #bannedbooksweek2020 Click here for tickets.http://ow.ly/qv2s50BIzvb

“It appears in all of his fiction, in one way, shape or form or another,” Hoppe said. “He talked about it. He thought about it. It was a complicated relationship. But nevertheless, an enduring one, and an important one for Kurt right up until the end of his life. And so WordPlay deals with Kurt's relationship with Indianapolis and deals with a lot of his ideas having to do with a sense of place, [of] being a Midwesterner with his family, which was one of the great formative families in the city of Indianapolis.”

Hoppe hopes that his play will help people better understand what Kurt's relationship was with Indianapolis and how it would inform his creativity and writing. Vonnegut also was a tireless advocate for the freedom to read.

“I'm thrilled the play is going to be produced,” he said. “I'm happy to have donated it to the Kurt Vonnegut Museum and Library for their own uses, and just delighted that it's going to wind up happening at the Phoenix Theatre in 2022, which is Kurt's centenary.”

Hoppe’s WordPlay reveals important vignettes from Vonnegut’s life through a multiplicity of voices. He read a segment meant for three different voices conveying essential biographical material about the writer’s life and his relationship with the city of his birth:

2:  He died eighty-four years later, on April 11, 2007, after falling down the front steps of the brownstone house where he lived at the time, in New York City.

3:  Kurt’s passing took place just days before he was to visit Indianapolis, where his hometown had been celebrating “The Year of Vonnegut.”

Hoppe met Kurt Vonnegut for the first time in 1991. “I was producing an event in Indianapolis, called Wordstruck, which was a city-wide festival of books and authors, and Kurt Vonnegut was our keynote speaker at the time,” he said. “There was some question about whether he would even come; people considered him to have a pretty contentious relationship with the city at that time. But we invited him. I was working for the Indiana Humanities Council.”

Their acquaintance grew into a friendship and a correspondence that longtime readers of NUVO might be aware of. (Hoppe was NUVO’s arts editor for 13 years.)

Hoppe also had an opportunity to say something about where he lives now: Lake Michigan’s shore, which he describes as “one of the great bodies of freshwater in the entire planet” but one that’s been adversely affected by industrial pollution.

“It was Carl Sandburg who said that the Indiana Dunes were the Midwest's equivalent of Yellowstone and Yosemite,” he said. “The fact that we're beginning to wean ourselves off of coal-fired power plants is really good news. It's a great event for public health. It's tremendous for the quality of our air and water. And it's a really good thing for the, in many cases, inner-city neighborhoods where coal-fired power plants have been traditionally placed. They have a really disproportionate effect on underprivileged folks, people of color.”

Before David Hoppe and Manon Voice spoke, there were other activities as well.

Pianist Joshua Thompson entertained patrons by playing classical compositions on the keyboard, and patrons also had an opportunity, after a socially distanced dinner, to learn to dance the Charleston.

Sadly, the deaths that Executive Director Whitehead acknowledged in her remarks comprised what would turn out to be an incomplete list.

On Oct. 2, it was announced that Indianapolis Downtown Inc. founding president Tamara Zahn had died as well, and Whitehead had this to say about her contribution to the city.

“I met Tamara in 2012, the year we both received Cultural Vision Awards from NUVO,” she said. I immediately recognized she was brilliant and savvy. She worked hard to make our community better and always with a smile. It’s painful to learn of her passing, but her legacy will illuminate downtown Indy far into the future.”