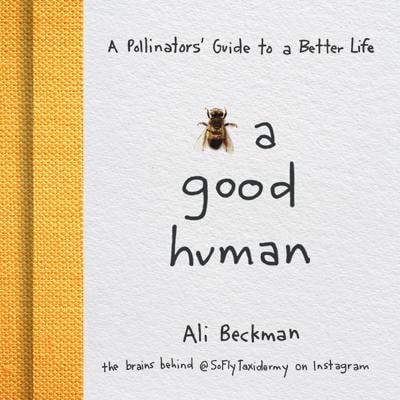 Two flies facing each other. Dead.

What would you do? I asked my friend.

Deal with it after supper, she replied, with not a whit of hesitancy.

What would you do? She parried.

Give it up, she advised, letting me know she spotted the impetus for my initial query.

At hand is Ali Beckman’s newly published, ‘Bee a good human: A pollinator’s guide to a better life’[ Red Lightning, an imprint of Indiana University Press].

“I couldn’t get over the image of the two flies having a conversation before they died. So, I grabbed a piece of paper, picked up the flies, got my pen out, and started drawing.”

Thus began @SoFlyTaxidermy on Instagram. Four and a half years and a slew of posts later, Ali Beckman is an online personality steeped in “entomology and the impact insects have on our world.”

With a nationwide following, Beckman remains true to her original purpose, “to make [us] think of the bigger picture and to laugh a little.”

She cites the simple truths and urges us to consider our part in the scheme of reality: “Insects and their contributions to our ecosystem are hard to ignore after you get down to the basics,” she says in the brief introduction. “Without humans, the planet would continue on; without insects, however, the environment is sure to collapse.”

Followers send/bring Beckman insects they find dead. The specimens are immortalized in conversation as 2-page cartoon spreads offering up:

zen-wit: to bee or gnat to bee? That is the real question.

zen-conversing: what are you doing? Currently, or with my life?

social commentaries: the moment you ask a question that’s none of your business [er…beeswax]….

facts—check ‘em out: contrary to popular belief, it is actually moths that make cocoons, not butterflies.

homilies: home is where the spider webs are

and food for thought….PB&H is the new PB&J

My daughter called as I was flipping through my third—or was it the fourth—read-through.

In a league of its own, she surmised from my commentary; belongs alongside archie & mehitabel; Charlotte’s Web….Anansi tales…I cherish my little collection of 'Ant & Bee Are Friends”…

Over the ensuing five minutes we mined memories of shared kids’ books and piled on the adult titles with insect main and minor characters …as symbolic representations, as causes of effects…and went on to listing the delighting of all senses in all art forms; who isn’t zig-zagged into Rimsky-Korsakov’s “Flight of the Bumblebee,” imagery within ‘Midsummer Night’s Dream,’ sense of hope inherent with Anne Frank’s butterfly; amused by the impertinent insects of Aesop’s fables?

“Bee a good human” just might be the entry for dis-believers to come to terms with the real power of the tiniest to be mightier than the so-called mighty. Insects are doing their best to save humans from self-destruction.

Yes, read science-based essays in a swath of media; watch informative television shows; etc etc…but for the sheer joy of bringing everyone together as a caring community in all its manifestations, share a copy of “Bee a good human.”

”Did you know a tiny midge (a cousin to flies) pollinates chocolate?” posits Beckman.

If you dis-believe the truthful consequences of uncaring activity, be prepared for the imminent absence of that savory;  humans are destroying the essential ecosystem for growing and harvesting cacao. Sans the tiny midge, we are as undone as a kingdom for want of a nail.