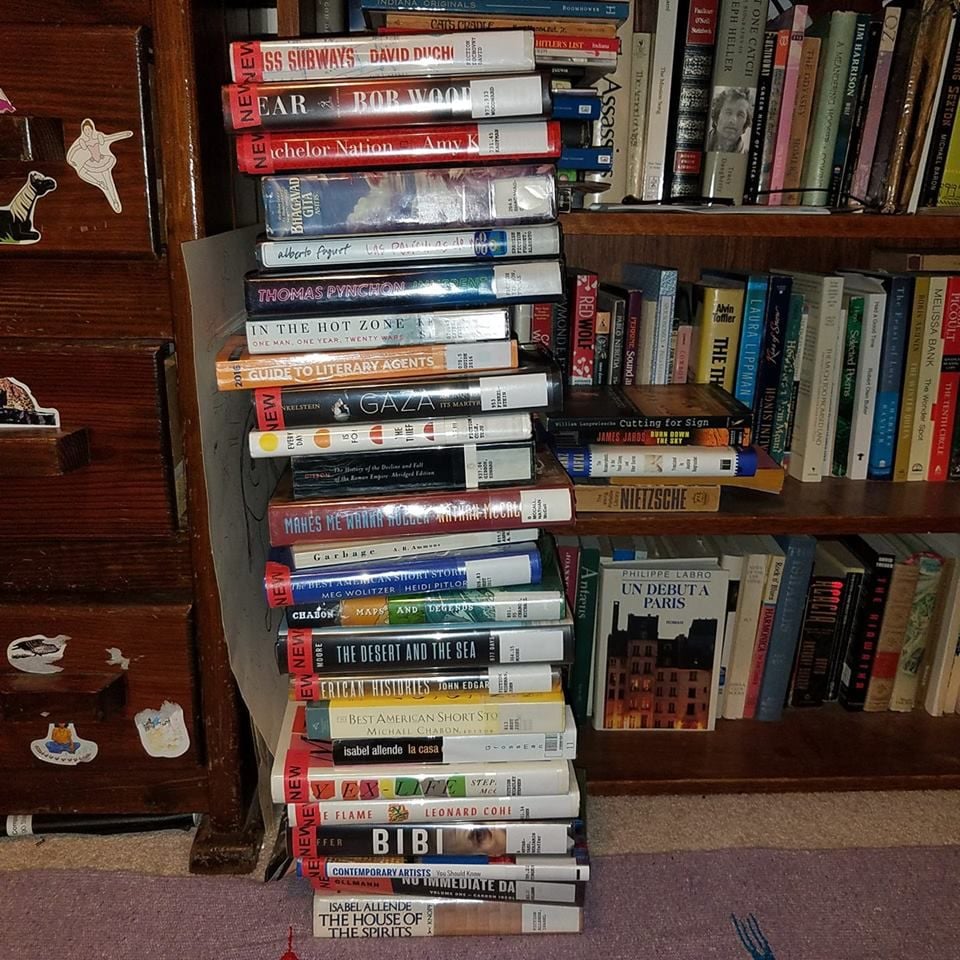 Dan Grossman's checked out library books as of Dec. 3 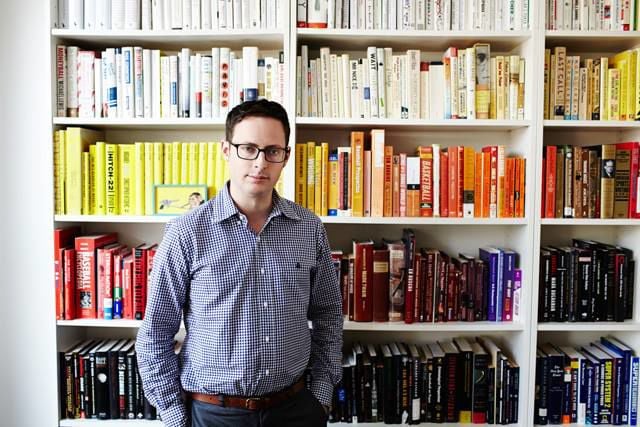 Nate Silver with his library in 2013

This is something of a confession.

Lately I’ve fallen into a habit. Immediately after jogging on the Monon Trail, while still in my sweatpants, I stop by Carmel Clay Public Library—close to where I live—and browse the selection of DVDs, CDs and books.

If I check out a DVD or a CD, there’s a reasonable chance I’ll see or listen to it. With the books, let’s just say, chances are pretty poor that I’ll get to read the first page.

I love libraries—just about my favorite place to hang out on this planet is the Central Library atrium downtown—but Carmel Clay Public Library is pretty great too. I love wandering the stacks to see what’s new and also chatting with the librarians there.

I also love reading. Like most everyone else these days, however, I get distracted by my social media feed, and not only by reading the latest in The New York Times. You might find me, say, watching the latest cat videos. And then my job as NUVO arts editor keeps me pretty busy too.

But lately thing have come to a head. After placing all 25 books in a great big stack, I realized that I’m the Joe the Plumber of books.

Joe the Plumber, aka Joe Wurzelbacher, is the man who in 2008 infamously questioned then presidential candidate Barack Obama about his proposed tax policy. Wurzelbacher was concerned that this policy might hurt him several years out, when he aspired to be making $250,000 or more per year. Since he wasn't bringing that kind of dough home at the time, aspired is the operative word here.

So let’s just say, that when I’m checking out books, many of my selections are aspirational. That is, I aspire to read them, and sometimes I actually succeed. But the only book I managed to finish in my current stack is novelist Teju Cole’s Every Day is for the Thief, which is about an unnamed narrator’s visit to his home-country. This just so happens to be Nigeria, where Cole grew up.

I wanted to interview Cole before his reading at Butler University back in November. I also wanted to go to the reading. Neither worked out, but I'm glad I read the book, the upshot of which is that a country can still have a hold on you even if many of its problems seem insurmountable.

This is a lesson that fans of veteran Washington Post Journalist Bob Woodward can probably appreciate.

I just checked out Woodward’s just-released Fear, a real-time diary of Trump’s time so far in office, and looked through it a bit. It confirms my belief that Trump is treating the U.S. like one of the many casinos he shepherded into bankruptcy. But there's little enjoyment in picking up this book. It's kinda like picking at a scab. That is, you know what you’re going to find there. The fountain of pus might confirm your worst fears, but you just can’t help it.

I’ve made a foray into The House of the Spirits by Isabel Allende, which has something of the whiff at least at least of my favorite novel of all time, Gabriel Garcia Marquez’s One Hundred Years of Solitude. I also checked out the Allende book in Spanish, which I really have no hope of reading at my elementary level in that language.

I’ve also checked out Gibbon’s Decline and Fall of the Roman Empire, an edited version—I have a thing for Roman history—and also A.R. Ammons’ book-long poem Garbage, which is on my list of poems to read before I die, but every time I open it up I get distracted or fall asleep.

I won’t even get into all the books I have on my shelves at home, many in foreign languages, many of them advance reader's copies—a consequence of having worked at Borders Books & Music in various capacities for over a decade.

But out of all of these there is a standout, an exceptional (as in exceptionally huge) book from my personal collection that deserves some time in the light.

Norman Mailer’s Harlot’s Ghost, his novel about the CIA, sits on the stand near my downstairs toilet. I purchased the heavily discounted hardback first edition in 1994. I’ve been reading the book, which weighs in at 1292 pages, since May, 2017. I'm on page 986.

I wondered if there might be others out there with similar library (and reading) habits. So I posted a picture of my 25-foot deep stack of checked-out library books. Along with that I posted a little poem that was also a request for input on my Facebook page.  (After posting this, feeling a little embarrassed, I promptly returned half of the books in my stack.)

My sister Rebecca Kim, who is married with three kids, and lives in Dallas, TX., responded:

We are known to take huge bags to the library and fill them like its trick-or-treating. Guilty pleasure, I guess. Or pretend hoarding.

I'm guilty of doing it and of passing the habit on to the next generation.😁

My mom’s cousin Brian Silver, who is a retired professor at Michigan State University, wrote the following:

I bought a couple thousand books. Some with my own money and some with grant money. After I retired I donated most of my specialized Russian language books (on politics, economics, population, etc.) to the University of Wisconsin library.

I also requested that Silver discuss the library habits of his son Nate Silver, the founder and editor-in-chief of the FiveThirtyEight  blog.

Brian replied with an anecdote about the well-known statistician’s own personal book collection:

Nate has a pretty good library, mainly of books on economics, forecasting, probability, and the like. Plus copies of his own book The Signal and the Noise in English and in the many languages in which it has been published. Curiously it hasn't been published in French. But it's available in German, Finnish, Spanish, Portuguese, Italian, Romanian, Czech, Polish, Chinese (both old characters and simplified), and Japanese. Nate has organized his shelves by COLOR of the jackets or covers, not by subject.

Of course, I wanted to get some input from friends a little closer to home as well.

One hundred and sixty-seven times (3 weeks renewal) was the most I have renewed my borrowing time for a particular supply of art books. That particular batch I just couldn't give up. I became a bit resentful when other patrons would make a request for one to be returned. Finally, the library refused anymore renewals. I had considered claiming that I lost them, but the replacement costs convinced me to let them all go back.

When it's time to check out there is always room for one more book in my arms.

It is always best in books, to have more, not less. Plus supporting your library is fabulous. Checking out stuff is like currency-and no one ever knows if you read/watched it or not. It’s about options.

I visit my library at least twice a week. I currently have 18 books checked out, four online for kindle and two on hold. I never get through them all and I am constantly renewing. If i renew more than twice, I order it for my bookshelf. I miss my Borders😁

Jason Messman, (another) former Borders employee and current librarian at Carmel Clay Public Library gets the last word in this blog, directed at the author:

What was most impressive was how you balanced them all on your head as you walked out...well done!

With news that Indiana Dunes National Lakeshore has become America’s 61st national park, Dan recalls the summer his much-younger self spent at the Dunes as an assistant park ranger.