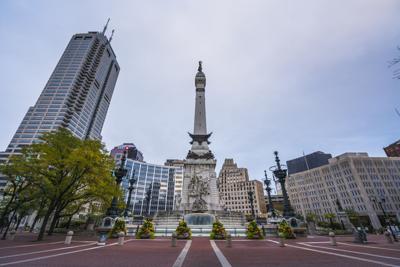 This interview has been edited for length and clarity.

On Sept. 3, I had a chance to talk to Noman Minnick, who teaches English at both IUPUI and Marian University. Minnick is the author of two books of poetry, Folly (2008) and To Taste The Water (2013), as well as a chapbook titled Advice for a Young Poet (2020). He is editor of the forthcoming literary anthology The Indianapolis Anthology, to be published in May, 2021 by Belt Magazine.

DAN GROSSMAN: During the poetry writing course I took last year with Mitchell Douglas at IUPUI one of the things I came away with from, from all the books we read in that class, was that there seems to be a lot of diverse writers out there, a lot of diverse poets from a lot of different ethnic backgrounds —  a lot of young poets —  being published these days. Is that your impression too?

NORMAN MINNICK: Are you talking about specifically about this anthology or just my observation?

MINNICK: Yeah, I agree with that. What was kind of frustrating for me: I had no problem getting submissions from the Black community, from all kinds of different places [...] but I think there's only two Latinx writers in the whole collection. That's a community I wish we could connect with more.

GROSSMAN:  While we're  that subject, how did you get involved with The Indianapolis Anthology?

MINNICK: I just sent [the editor] an email and, and I guess the timing was right because they said they have this city anthology series and they've done cities  —  Cleveland and Detroit and St. Louis and Chicago and all these other cities. I realized they didn't have Indianapolis so when I emailed him and said, “Could I pitch this?” They said, “We were just thinking about Indianapolis so perfect timing.” So I sent him a proposal and they took it.

MINNICK: I don't know if I can make a generalization but I was pleasantly surprised: I was worried that they would talk about some of the popular tourist sites and what we're known for —  the Indy 500 and the Colts and stuff like that. But I was pleasantly surprised at how little of that I got, and how I got pieces that had great insights into parts of the city and aspects of the city that really make the city unique, that you and I might know about it but the people who aren't from here would never necessarily know about. And I learned a lot too about history, about certain neighborhoods, and things that I never knew. So I was really impressed and happy to get such nuance about the city.

GROSSMAN: Two of the poets to be published in The Indianapolis Anthology are Manon Voice and Tatjana Rebelle, poets associated with the spoken word scene here in Indy. How familiar are you with that scene?

MINNICK: I've been to maybe only like two of those readings and that was because someone like Manon  —  she was in one of my writing center classes and invited me out. But so I'm not like a regular or anything like that, but I do know that it exists.

GROSSMAN: Do you think there's something that poets who aren't necessarily as familiar with a spoken word scene might learn from those spoken word poets?

MINNICK: Yeah, I think there's a few things we can learn. I think the main things we could learn would be not to forget the performance value. Now, I don't mean that poetry needs to be performed, necessarily, but the fact is, it is meant to be brought off of the page. I mean, even traditionally poems were recited and spoken aloud and so forth. So I think that's a good reminder for us to maybe bring it off of the page more. I think we get used to opening a book and sitting down and burying our face in that book and it's a good reminder to bring it off the page and make it more of a communal kind of thing. Because it, again, historically, was a communal thing. So I think those are a couple aspects that we could learn from. Obviously, the musicality —  not to forget the sounds and the rhythms and things like that.

GROSSMAN: You seem to be a poet more influenced by William Carlos Williams and say, then say, Wallace Stevens.

MINNICK: How do you mean ?

GROSSMAN: There was one poem in particular where you specifically reference, William Carlos Williams in your collection Folly.

MINNICK: That was actually my very first poem to ever get published and it was the [Indiana Writers Center publication] Flying Island that published that.

MINNICK: That was way back when it was a newspaper-type-thing.

GROSSMAN: I remember that.

MINNICK: Williams was the first poet that I sort of thought that I discovered on my own. I was exposed to poets before but they were always from my father's bookshelf, or whatever.  But I remember it was when I first went to college it was in Marian [University], and I was just kind of browsing through the stacks. I don't know what it was about that particular book. I just pulled it down. His picture on the cover was inviting. I opened it up and I was like “Oh these are pretty accessible,” and I remember just getting so excited about his poems. I took it immediately downstairs to [Marian University professor and poet] David Shumate's office and he had an office in the basement next to Larry Atwood they both had offices down there and they were both kind of teasing me:  “Oh you just now discovered William Carlos Williams?”  I thought this was some obscure poet no one had ever heard of. [I wanted ] to show him off, “Look what I found.” So I guess, his influence, I can't get rid of.

MINNICK: A lot. A few years later I really started to get into him. He is so colossal that it's hard for me to sort of pinpoint maybe exactly where in Stevens I would want to be or want to have influence. What I mean is there's so many different things I like about him but he's someone that I'm still would probably still say I'm grappling with. [What] influenced me most would be titles. Just reading his contents pages is kind of fun.

GROSSMAN: I don't know if Indianapolis is really known for its poets, aside from James Whitcomb Riley, Etheridge Knight, and Mari Evans. Do you read any of those poets?

MINNICK: Yes and Terrence Hayes [author of American Sonnets for my Past and Future Assassin and author of To Float in the Space Between: A Life and Work in Conversation with the Life and Work of Etheridge Knight.] was here recently. He's in the anthology too. But he was talking about Etheridge and it dawned on me that we have a mural for Vonnegut and for Mari Evans but not for Knight. But it is interesting that we don't have more. You could look at the number of sort of famous well known poets that the city has produced and say, well, then it must not be a very literary community. However, when I was at Butler and running the Visiting Writers Series, I mean, my God, we would put a poet in Clowes Hall and fill the place.

GROSSMAN: You mentioned that the "The Purchase" was your first published poem. Is that around the time you began writing poetry, when you were in college, or before that?

MINNICK: I think it was my senior year. So it would be like 1999. I probably started writing in 1996 so yeah it was right right there at the beginning.

GROSSMAN: So what drew you to it, more than any other type of writing?

MINNICK: Oh my gosh, That's interesting. Growing up, I always thought I would want to write a novel and be the next great American novelist or something. Of course I had no idea you know how to do that. Before all that, I was in a band and wrote lyrics for music, for songs, and never really thought of that as poetry. Once I started writing poetry I was like, “This is something I've done before and, playing with words.”[...] My answer is not going to be that interesting but I think it has a lot to do with the fact that it was easy for me to sit down and work on a poem that's short. And I could do short pieces in chunks of time and not have to spend a lot of time on it.

GROSSMAN: Where did you grow up?

GROSSMAN: Do you have a good sense of Indianapolis as a city and did that filter down into your selection of poets for the anthology?

MINNICK: To be honest with you, I didn't have to really turn away as many as I thought I would.  I mean, there were so many just really high quality submissions and some of the ones that were not accepted, It wasn't always because they were such poor quality. It’s that they were maybe saying the same things that a couple other pieces were saying or something like that, that they didn't just didn't quite fit [...] I just let them play off of each other and create their own sort of life.

GROSSMAN: The title of your latest chapbook is Advice for a Young Poet. Well, what is your advice for a young poet these days?

MINNICK: Well, it's not in that book for sure. The opening poem is “Advice for a Young Poet”. I made a video of it if; you can find it on YouTube. It's not my voice but I'm taking on a persona of someone who's a charlatan, who's trying to give advice to someone and they're really misled. It's supposed to be funny. I hope it works. But oh my gosh yes I find myself saying this a lot to young poets: to read beyond just the people in your MFA programs, beyond the people who are around in your circles to read; go back through the Dead Poets and stuff and even beyond poetry —  just to trace things back and get a real sense for that stuff. Nothing frustrates me more than when I have these young students who [don’t think they need to read widely]. It's the same in any genre. I'm sure musicians are the same way.  I would hope they would listen to more than just Beyonce. I would hope they would go back to Billie Holiday and learn from her so I say the same thing to poets.

GROSSMAN: Does it ever work, do you ever say something like, "Well, if you listen to the Rolling Stones’ 'Sympathy for the Devil' that's really Charles Baudelaire talking." Does kind of attitude ever work?

MINNICK: No. They don't listen to me. They never listened to me. I guess I'm starting to become the old man that you, as a young person, you're supposed to shrug off.

Editor’s Note: Dan Grossman has a poem to be published in the forthcoming Indianapolis Anthology.