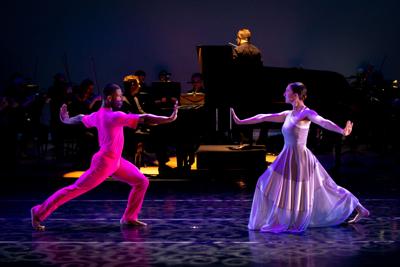 Wojciech Kilar was born on July 17,1932 in Lwów (then Poland; since 1945 Lviv in UkrSSR, now Ukraine). The ICO is configured as a string orchestra, and the DK dancers, clad in black and in perpetual motion, bring to life Kilar’s symphonic poem, Orawa. I could feel the flow from daybreak to sundown in a place where stands of evergreens surrounding a lake nestled among mountains, live in harmony with planted fields and free-roaming cattle. The bustle is nature doing her thing with respectful intervention by humans. In this world premiere work by David Hochoy, the dancers configure and reconfigure as aspects of a landscape are interpreted by the players. It’s a luscious visualization of spontaneity, energy, transformation and mutuality.

With Arthur Honegger’s Pastorrale d’ete’  ICO strings again figure upfront, now along with woodwinds and horns taking us into a peaceful summer dawn unfolding amidst the Swiss Alps in the upper region from Berne. I’ve felt these drifts of touching color clouds at awakening during my summer visits to the region where the sky and the rooftop hardly have six degrees of separation. Its mood is that of a prelude to a magical day. If you are up for a fuller impression in words, find Jonathan Coe’s novel, “Expo  58.” The book was brought to my attention when it was published in 2013 because I might have rhapsodized once too often to a friend about how magnificently  Honnegger captured the image in this expansive Pastorale d’ete that embraces us for not much more than ten minutes—the time it takes for nature to show its magical stretch from night to day.

Maurice Ravel’s “Piano Concerto in G Major” met its triumphant triad with 2017 American Pianists Awards winner Drew Petersen joining the ICO and DK’s dancers, bringing to life David Hochoy’s world premiere in the spirit of the composer’s intention to show the soloist’s virtuosity and to entertain in the manner of Mozart and Saint-Saëns. Ravel described the three customary parts: “the initial  Allegro, a compact classical structure, is followed by an Adagio, in which I wanted to render particular homage to "scholasticism,” and in which I attempted to write as well as I could; to conclude, a lively movement in Rondo form, likewise conceived in accordance with the most immutable traditions.”

Hochoy’s choreography has a feel of “Sunday in the Park with…” Movement is expansive, ever-flowing with changing group dynamics revolving around the luxurious lead partnering between Paige Robinson and Stuart Lewis, who reminded me of Oberon and Titania. Emily Dyson with Manuel Valdes, in the third movement, called to mind the film Jazz footwork of 1940s films, and ultimately  Holly Harkins gifts us with superb comic relief up to the galloping and the piano’s ‘BOOM, BOOM,BOOM’ finale. Petersen and the ICO Players are in the thick of the activity, inspiring shapes and story.

Barry Doss’ gloriously frothy pastel and frosty cream costumes brought a ripple of delight from the audience, which carried into the intermission with as much acclaim as did conversation about the two world premieres.

The ICO players delivering Leonard Bernstein’s dashing Overture to his operetta “Candide” returned us to Hochoy’s much-loved choreography that takes on new life with each iteration. It’s a delightful Mickey Mouse moment a la “Fantasia”—here it was Cody Miley mirroring Maestro Matthew Kraemer zipping through what annotator John Henken describes as a “shapely sonata form with points of canonic imitation and a sparkling Rossini crescendo to close,” with snippets of every song sending the dancers into a dizzying palette of moves matching Cheryl Sparks’ costumes and Laura E.Glover’s lighting every bit as much alive as are the dancers.  All ends with a zippy flourish from Miley and Kraemer in perfect sync. Wow…again.

With Handel’s Larghetto from Concerto Grosso in F Major, the ICO players, and we in the seats enjoy a calm respite, like a short stroll amidst a stand of trees.

The program closed with Johannes Brahms’ Variations on a Theme of Joseph Haydn. Hochoy updates his original 1994 choreography for the eight variations bookended by the opening Theme and the closing Finale. Emily Dyson, with the full company of dancers, brings us to the five-measure phrases. It’s a simple tune that the company picks up and messes around with, so we have to guess the tune so to speak, and then it’s a free-for-all for everyone to have a say. It's a joy to experience the ICO players sync with DK dancers in up-personship. Natalie Clevenger took possession of Variation II, the Company as a whole met her challenge for Variation III, Emily Franks and Stuart Lewis broke away for the fourth variation, the foursome of Cody Miley, Emily Dyson, Manuel Valdes and Sarah Taylor trumped with Variation V; or so they thought because Kieran King and Justin Rainey cajoled Miley and Valdes into spirited take for the sixth variation, only to be shooed off by Sarah Taylor prompting the whole company into a seventh. It was Marie Kuhns with Miley who wrapped it up for lucky eight, and the entire group jumped in for the don’t take your eyes off us Finale filled with Brahms' mastery of 19th-century compositional fireworks.

There’s no story, just our individual and collective imaginations glorying in the dancers’ moves and the ICO spinning music like a silvery thread. Guy Clark’s costumes are as fresh as ever.

Coming up for DK

For information and tickets: https://www.indyartsguide.org/event/dance-kaleidoscope-classic-to-contemporary/

August 5-6  on The District Theatre Mainstage, DK Dancer Natalie Clevenger, winner of the 2022

Beckmann Fellowship program with the Arts Council of Indianapolis is producing a concert dance performance. “The performance aims to give LGBTQ+ choreographers in the community space to create freely,” reads the email.

The ICO is announcing their 2022-2023 season at their June 4 fundraising concert.