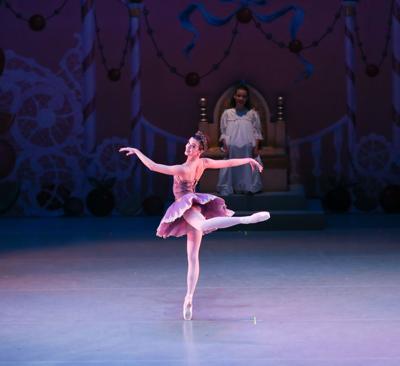 Now, a new paradigm is emerging with Kristin Toner’s retirement as an IB dancer.

An email Q&A with Toner and Lingner, and then Toner on her own, brings us into the dynamics of IB 2020:

RITA KOHN: What propelled each of you, personally and professionally, into this leap of faith in 2017?

CHRIS LINGNER: I trusted in Vicky and her vision, pure and simple. I was ready for a new challenge and was ready to bring what I had learned in the arts world from across the country and help build it up here at home.

KRISTIN TONER: I had been dancing with the Nashville Ballet for the previous six seasons before joining Indianapolis Ballet as a founding member. Victoria offered me a chance to grow as a dancer by performing principal roles with her new company. Since I had studied under Victoria as a student, I was confident I would be able to grow technically, artistically, and I would be given more responsibility with this move to Indianapolis. Personally, I was in the process of planning my wedding and getting married, so I was starting a new chapter in more ways than one. I grew up in Indianapolis, so moving home to be near family made the decision a little easier, too.

KOHN: How did you connect with each other to want to do this together?

LINGNER: Well, really it was Vicky. Kristin and I have known each other for quite some time and she was my first partner in the party scene in Nutcracker. When I knew she was coming back, I was really excited to get to work with her again and it just felt so right for each of us to come back full circle after so much time. We both knew we were in it for the right reasons

TONER: Chris and I were paired as partners as party girl and party boy in The Nutcracker when we first met. A few years later we shared the stage together as Clara and Fritz. We have kept in touch throughout the years, so it seemed natural to take this next step together since dance was woven into our friendship and our lives. To have a friend and a partner I could trust so easily based on our years of friendship enabled me to be able to adapt quickly at Indianapolis Ballet.

KOHN: What now, as you look back over the impact from two to a chamber company of 20+, do you see as the shape of the company because of what you have been willing and able to do?

LINGNER: I remember early on [in 2017] we both looked at each other and just felt the immense responsibility of what we were doing. We had to set the standard high. We had to knock it out of the park to build that audience and attract new talent to the city. I think we both can say we have managed to do that. Prior to COVID we were on the rise and even now we are working to build creative ways to stay engaged. We’ve come too far in such a short time to allow anything to stop us now.

TONER: The organization has come a long way since 2017 with just the two of us! I think Chris and I were the foundation, but we have a solid company now that I was blessed to be a part of in such a unique way. I think the fact that all 20 dancers were new to Indianapolis [Ballet] as a group presented some risk and challenges as we all had to adapt to a new paradigm. Learning our new roles and rules bonded the company into a family very quickly.

KOHN: Kristin, for those of us who have followed you from Indianapolis School of Ballet student to a founding IB dancer, we've witnessed your passion grow your artistry, grace and leadership in performance and in teaching. What now, in the process of 'retiring,' is the message you want to share with ISB students and the IB company AND the community of Indianapolis [and Indiana] — as a lodestar for the future of the school and the company?

TONER: As a young student growing up in a ballet school affiliated with a professional company, I was asked to be in a professional performance of La Sylphide as a nine-year-old. I came out of my first rehearsal with a new passion and desire to pursue ballet as a career. It was so exciting for me to see my rehearsal process come together with the whole production on stage. For current students and company members it is easy to forget that the dancing years are short. The days can seem long and slow, but remember to enjoy each role and each performance, because you never know when it will be your last. We can only appreciate the thrill of dancing on stage for such a short time before we are back in the wings. Soak up every moment, and really find the joy in dancing for yourself. The best moments onstage are when you take a second to realize you are doing what you love and living in the moment. To our community and audience, thank you for believing in Indianapolis Ballet. We are here for the long term! If you haven't had the opportunity to see a performance yet, please do, for I know you will leave inspired and uplifted. Ballet can unite people through music, by transporting them into the story of the ballet. The arts are for everyone — the young and old alike.

KOHN: My NUVO reviews have remarked on the risks you have been willing to take to grow your repertoire. What do you look at as the WOW moments from across your altogether exemplary career?

TONER: I have performed in various venues, from parks and schools to theaters of varying sizes. From New York to Iowa, China and Taiwan, I am so thankful for having the opportunity to live my dream. One highlight from my career would be opening night with IB's Firebird. When I was onstage, I felt so much of the character of the Firebird come to life from within me. It was truly an emotional moment I will never forget. I was very proud of myself after completing the dual roles of Odette/Odile in Swan Lake in 2019. It is such a demanding ballet, and performing it was so rewarding and exhilarating!  However, one of my favorite roles I've ever performed was Choleric from George Balanchine's Four Temperaments. That role just felt like "me” so much, as the role was a powerful solo and demanded command of the stage in a strong way. It provided me a way to show off my strengths as a ballerina, as the choreography called for many big jumps and leaps.

KOHN: “Retire” is an elusive aspect of professional dance. It has a connotation of growth into leadership roles off stage and into character roles on stage. Where do you see yourself over the next five years?

TONER: Ballet will never disappear from my life. I would love to continue my work by choreographing pieces and working with the company members. My first choreographed ballet, A New Normal, debuted in 2019 [at IndyFringeFest], and it was such a rewarding journey for my artistic growth. I created it from watching a close friend go through the process of grief and pain after her brother’s death. I would like to tap into this developing new passion moving forward. It would be an honor to return to the stage in a character role in the future.

Retiring in my 30s is bittersweet. I have met the most wonderful, unique, creative, and vibrant people in my decades of dancing, and I can say I actually got to live my little girl fantasy of being a professional ballerina. I was one of the fortunate ones who was able to decide when my retirement would be and prepare for it mentally. Some dancers don't have that privilege. I have been very blessed to work for fantastic artistic directors and their staff, as well as be a role model for budding ballerinas. It can be a glamorous life, but there is a lot of blood, sweat, and tears behind me. I am going to spend the next few months recovering from hip surgery, and will dance into my next chapter of life from there. I am so grateful for the people who have stood beside me and helped me along my journey. My mom, dad, and sister from day one, my husband, friends, teachers and co-workers — thank you for being so supportive and encouraging. My greatest thanks goes to God, for blessing me and all He has done.