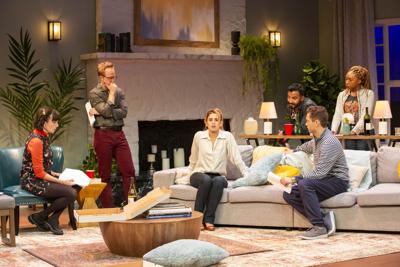 Cathy Morris lured me back to The Jazz Kitchen. Celebrating her '6-oh' birthday indeed is a community event with a promise to showcase her tapestry of music-making as an artist, educator, community activist, international ambassador.

As easily at home in front of a gaggle of children marveling at that odd-looking electric violin, or in front of 250,000 fans at the Formula One, it's at the corner of College and 54th with her band that WE connect down-home per the past 25 years during which time her vision grew from performing other people's music to composing her own; from going to schools and to detention centers, for a different kind of in-reach from what others label outreach. Collaboration is the frame into which Morris pictures herself.

"I have been crazy but beautifully busy overseeing Arts With A Purpose," explained Morris by way of explanation for not getting back to me with her playlist. "It's the not-for-profit I founded that matches artists of all disciplines to communities that need the arts and have no access. It's really taken off!

"People are realizing more and more that the arts are not just for entertainment but for social-emotional well-being. That's why I initiated this five years ago! Here's our F.B. page link that is most updated: https://www.facebook.com/artswithapurposeindy

What an awesome journey it's been and continues to be!

"Gary Walters, the original keyboardist with the band, was our featured guest. Winton Reynolds, from Louisville, was on Keys for the October 6 Jazz Kitchen program, along with Peter Kienle from Bloomington on Guitar, Steve Dokken on bass, Tony Medeiros on drums, and Gerardo Becerra on percussion."

Highlighted were songs from her albums: Cathy Morris (self-titled), On The Run, It's About Time, An Electric Violin Christmas, Welcome to My World, Latin Jazz, Music for Wellness.

Also, find Morris playing on: Here For You, Myths For A New Millennium, C. Winton Reynolds.

"No C.D.s for sale anymore," informed Morris. "You can buy them digitally on CD baby."

Catching up with Cathy Morris is an exercise in delight.

As with your hand in the snack bowl, one outing led to another. This time to the Indiana Repertory Theatre down on Washington Street off Capitol street to witness the first live performance since March 2019. IRT, undeterred from producing, has been filming and streaming in partnership with WFYI-Public Television, so it seemed like a smooth segue to "The Book Club Play" by Karen Zacarías.

The frame for this comedy is the filming of bi-weekly meetings of the five-member book club for a documentary produced by a fictional, impressive-sounding persona. Via IRT's usual amazing scenic design legacy [please, applaud Junghyun Georgia Lee] we're in the midst of —wait, wait…this is a comedy, right? Well, amidst the wise-cracks and the oh-mys, we're leaning forward a bit because something in our bones is ready for the other shoe-in-mouth to drop. Zacarais knows us. Her writing is sharp, insightful. She expects the same from our attention curve.

Upfront, Ana feels a bit too perky with her sweetness, her first to speak to the camera introduction: "It's my book club," she purrs. By play's end, in the deft portrayal by Andrea San Miguel, Ana out-shreds Maggie of "Cat on a Hot Tin Roof" fame, and has drawn me back into the connected core question of male friendship, discreetly described by playwright Tennessee Williams as 'the time of their Greek legend…"

Here, however, Zacarias gives the rest of her characters an alternate scenario out of self-destruction. Those on stage, and we in the seats, find catharsis through laughter and wisdom from learning to see ourselves as others see us. It's the unexpected guest that actually becomes the tipping point. No spoilers here. Show up on your own between now and October 31 to experience the deft onstage interplay between Andrea San Miguel, Sean Davis, Will Mobley, Emily Berman, Cassia Thompson and Adam Poss. And yes, there's more....

In 1995, Zacarías established and founded the Young Playwrights' Theater. This grew from initially volunteering and teaching playwriting classes to children in D.C. classrooms. When this program grew in popularity, Zacarias established a 501c3 nonprofit organization.

The following day, I was whisked to the new Kan Kan Cinema space on the Eastside, in the Windsor Park neighborhood, at 1258 Windsor St, Indianapolis, 46201 [just around the corner from Spades Public Library, and close to Brookside street and the CCIC complex, as orientation points].

"Ferguson Rises" gifts as a retrospective and a forward-facing documentary. It asks deep questions.

What tears us apart, what grows us into a caring community? Why is it worthwhile to revisit what was extraordinarily painful seven years ago? How does personal loss help heal national trauma? When is it my calling to step up to help right wrongs? Who are my partners? Where do I begin? Where am I heading?

I think I breathed during the hour and a half, paced to place me into the unfolding episodes of people I've never met yet deeply care about because… but for some grace…there go I.

Think—outside comfort. Think inside ever-present discomfort. Think of my own family story…Nazi Germany—and all the preceding and succeeding ethnic cleansing across times and spaces.

Thinking positivity is the gift from documentary maker Mobolaji Olambiwonnu. During the Q/A following the viewing, interlocutor David Carter asked Olambiwonnu, "How did this project come about?"

"When Michael Brown, Jr., was killed, my wife was pregnant with our son," replied Olambiwonnu, "and I thought, when he learns of this, he might ask, 'what did you do to make a difference?' I had to do something to give my son an answer….I had to tell the story that adds humanity …"

The journey to doing something to make a difference takes thought and time and patience.

One feels this trajectory as we travel through the story's past into our present and catch a glimpse into a future of hopefulness. What we learn is how Michael Brown, Sr., strives toward a positive impact in memory of his son. How else can one go on living? Personal rage is not the answer to living purposefully.

Alongside Olambiwonnu, for the Q/A, was Dr. Leah Gunning Francis, Vice President for Academic Affairs at Christian Theological Seminary. Miki Mathioudakis introduced me to Dr. Francis, who immediately emailed me data about her books, Ferguson and Faith: Sparking Leadership and Awakening Community (Chalice Press, 2015) and Faith After Ferguson: Resilient Leadership in Pursuit of Racial Justice (Chalice Press, 2021).

Both focus on clergy and young activist involvement from the Ferguson uprising through the U.S. Capitol invasion on January 6, 2021. In 2014 Dr. Francis was living in St. Louis.

Dr. Francis appears on the PBS documentary  The Talk: Race in America, which was released in 2017, and now is on  Ferguson Rises .

We are directed to join the conversation: What aspects of Michael Brown Sr.'s story resonate with you? Can someone's grief lead to purpose? What are positive takeaways you found in watching the documentary Ferguson Rises?

How does a father find purpose in pain?

The promo reads: In 2014, Michael Brown Sr.'s son was killed by white police officer Darren Wilson in Ferguson, Missouri, an event that fueled the global Black Lives Matter movement. But his personal story of seeking justice and healing has not been told until now. Ferguson Rises: A father's journey to find purpose within tragedy. This film is an act of remembrance and quiet defiance.

"Join the discussion: Go to: https://www.pbs.org/independentlens/documentaries/ferguson-rises/

"Ferguson Rises is about tragedy, transcendence, and hope," informs the online trailer. "It is the story of a father's grief and a small town that gave rise to the global Black Lives Matter movement. Ferguson Rises is a powerful reminder that, while specifics may differ, the fight for human rights is universal. On August 9, 2014, Michael Brown Jr. was shot and killed by a police officer in Ferguson, Mo., sparking protest and anger in the days that followed. Six years later, the city of Ferguson looks toward the future with hope."

Cinematography is by Jerry Henry, and Music is by Sion Day

And then we were at the Toby Theater at Newfields, for the October 9 feature event: "Spencer"—as in the maiden name of Princess Diana, a.k.a. Mrs. Charles, etc. etc. etc. Windsor, in ordinary speak. On the way home, Miki and I tried to sort out this "biographical, psychological drama film directed by Pablo Larraín, written by Steven Knight, and starring Kristen Stewart as Diana, Princess of Wales (née Spencer).

'Every fairytale ends," informs the online promo for "Spencer."

We get to this conclusion as we witness three days and nights, in 1991, spending the Christmas holiday with the royal family at Sandringham House [which is owned by Queen Elizabeth II, through an absorbing story in and of itself].

As Princess Diana experiences The Queen's concept of extended family togetherness, we are privy in tandem with Diana's interior trauma and the exterior splendor of the countryside and the elegance of the country house in the parish of Sandringham, in Norfolk, England, with a bit of 'upstairs/downstairs' insight thrown into the mix of decision-making with consequences beyond a nuclear family.

No one much is happy, per se. Diana, in sorting out how she got to here, is on the quest to identify personhood, familiar to most of us as we navigate the thorny question, who am I. The weighing is symbolic.

We know how the real story ends. To leave Prince Charles is not only severing ties to privilege, it is leaving the work she loves—connecting with people, especially children, and finding ways to elevate their station in life. And it has repercussions for her relationship with her sons, within which the loving rapport must somehow be maintained.

December, 1991. The film is a conjecture spun from real cloth covering a cold bed.

Spooky, both Miki and I concluded…or was the right word spooked?

The technical aspects of filmmaking here are impeccable. I think scenes will be embedded in my psyche for a long time, if not forever.

And so, within a span of a week, I experienced the journeys toward defining personhood within four arts genres. Popeye had it down pat with his one-liner: "I yam who I yam."

Heartland International Film Festival currently is in the hybrid live and online model for most of its 140+ titles. Connect here: heartlandfilmfestival.org