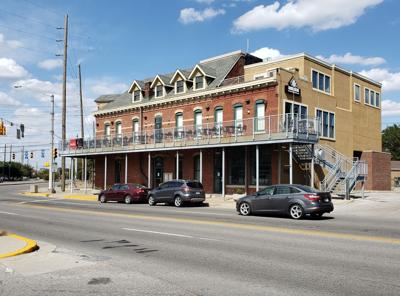 Michigan City-based writer David Hoppe’s new play, Kurt Vonnegut: WordPlay will be a highlight of a special (sold out) fundraising event at the Kurt Vonnegut Museum and Library (KVML) on Oct. 1.

Local actors, in partnership with Phoenix Theatre, will read from Hoppe’s play as part of Banned Books Week from Sept. 27- Oct. 3. Many like-minded organizations nationwide celebrate the freedom to read during this week, and highlight the danger of censorship. Indianapolis poet Manon Voice will serve as “activist-in-residence.”

Vonnegut himself was an outspoken critic of censorship and defender of the First Amendment.

“I wrote Kurt Vonnegut: WordPlay a couple of years ago out of a desire to reconnect with Kurt's voice,” Hoppe said. His hope was to make “something that might inform and enliven peoples' understanding and appreciation for the role Indianapolis played in Kurt's writing life. The Vonnegut estate is on board. That's been crucial.”

Born in 1922, Vonnegut is perhaps Indianapolis’ best-known writer. He is the author of 14 novels, five plays, five works of nonfiction, and numerous short stories. He died in 2007. Perhaps his best known work is his novel Slaughterhouse-Five which treats his own survival of the firebombing of Dresden, Germany  —  while a prisoner of war during WWII —  as a jumping off point for a novel that involves space aliens and time travel.

Hoppe’s play, however, is drawn entirely from Vonnegut’s nonfiction writing, primarily pieces collected in Palm Sunday and Man Without a Country. “Apart from a brief introductory passage, all the words in this piece are Kurt Vonnegut's,” said Hoppe. “I simply assembled them.”

In addition to his theatrical work, Hoppe is the author of Midcentury Boy, and a column Letter from Michiana, which occasionally appears in NUVO where he served as arts editor for 13 years.

“My hope was to create a piece that would be portable and accessible; able to be performed as readers’ theater by committed amateurs, or, in a more fully-fledged production by professionals,” added Hoppe.

From a production point of view, Hoppe said, WordPlay is meant to be performed by a cast of six; men and women. “It is not intended to be presented as a monologue or as a Vonnegut impersonation, à laMark Twain Tonight”, he said.

Hoppe donated the script as a gift to KVML to use in whatever ways founder and CEO Julia Whitehead and the board of directors found appropriate. Late in 2019, he and Whitehead began discussing what shape this might take.

“Then COVID struck,” said Hoppe, “and we had to bob and weave to navigate a new, significantly altered cultural landscape. The great news is that we have been able to assemble a truly stellar creative team. Constance Macy has served as producer on the project, as well as lending her formidable acting chops. Bill Simmons, another member of the cast, has brought the Phoenix Theatre into the mix. Classical musician Joshua Thompson will provide musical accompaniment. And John Green, formerly Butler University's groundbreaking theater director, is refreshing his Indy connection by serving as the production's director.”

As part of navigating this “significantly altered landscape,” most of the KMLV Banned Books Week activities —   with the exception of the sold-out Oct. 1 fundraising event —  will take place online.

Hoppe and his team broke the script up into a series of “bite-size chunks” this spring so that they could begin the process by producing a series of video podcasts, all done remotely, by cast members working from home, according to Hoppe.

After the Oct. 1 presentation as a reader's theater production they are aiming at a full blown professional stage production in 2022 to honor Vonnegut’s centenary,” said Hoppe.