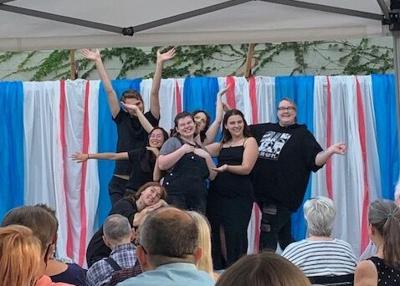 At the newly-built OutBack Outdoor Stage at 627 Massachusetts Ave., inside at the re-opened Hilbert Circle Theatre downtown at 32 E. Washington St., we are invited to consider drama and music as vehicles for carrying us into recognizing our personal roles in shaping the lives of others.

When are we caring, thoughtful, kind? When are we not? Who gets to choose those who become' the chosen’—who gets left out? What's the damage from bullying, from being totally ignored? What is the good that grows from random acts of thoughtfulness? When do we look around and notice the reality of 'freedom and equality, respect and opportunity, rights and responsibilities' that supposedly makes us a nation to which others want to come and participate in the touted opportunities?

All of this thinking has been prompted by attending back-to-back performances.

October 1, returning home from witnessing a new play, "FreedomZ," I headed straight to the bookshelf that holds a smallish book, "Charters of Democracy," published by Indiana University Center on Representative Government [www.corg.indiana.edu]. I re-read The Declaration of Independence, crafted in its final form 245 years ago, on July 4, 1776.

Resonating in my head was what I had just heard and seen at The OutBack space.

"We hold these truths," chanted a group of seven moving through the semi-circle seating plan. Making their way to a stage tucked within the alleyway abutting The District Theatre, the actors tossed "these truths… "from one to the other. "WE HOLD THEM…" resolutely declared one voice when all were on stage. Silence.

And then they picked up the perpetual motion of speaking: "We… hold…these…truths…" interspersing snippets of the full text, everyone talking at the same time; babble-speak rising and falling with the hum of traffic.

Exactly what is 'self-evident' about 'created equal, endowed with unalienable Rights…among which is the pursuit of Happiness…'

In parsing 'The unanimous Declaration of the thirteen United States of America,' this cast of seven, dressed in personalized variations of black, made collective and individual points as they moved in front of Red, White and Blue strips of cloth strung along a horizontal pole, serving as the backdrop. I could not always catch the words, but it didn't matter. The choreography, the inflections of speech, placed me back a half lifetime ago to Athens and Lysistrata being performed in Greek. Aristophanes, 411 BCE, I scribbled on the printed program; sexual stereotyping; speaking up for the right to speak up in the midst of a prolonged 21-year war wreaking havoc on the home fronts of both Athens and Sparta. One person, a woman, commands attention. It's a blueprint for democracy-in-action.

FreedomZ, a new one-act written and directed by Ben Asaykwee, "explores what freedom means to young people in America, especially people who are gay, bi, trans, queer, gender non-conforming, and to allies of those groups," offers the printed program.

The impetus for this production is Toby Schamberger, who developed "FreedomZ" – Creativity Action Service for his final year at the International School of Indiana, located at 4330 Michigan Rd., in Indianapolis.

Asaykwee took his expertise from a fruitful tenure with Q Artistry "to work with a group of young adults to produce a moving piece of real-life theatre that tells the story of teens growing up in the time of RFRA, and their experiences and response. Drawn straight from interviews with kids, these are authentic accounts of family life told with humor, honesty, and wisdom," reads the description.

"Everyone knows how it feels to be alone... or ostracized.. or ignored," he writes in an introduction. "We've all been there. We've all felt it at some point in our lives, regardless of who we are or where we come from.. Everyone has felt it on some level—youth in the LGTBQ+ world experience this daily... and often in heartbreaking ways. And when laws make it easier to separate us and divide us, it only makes things worse. Thankfully, there are so many beautiful spirits that choose to lift others, and many of those are young people themselves."

The cast premiering the work includes: Malia Weatherspoon-She/Her; Katie Eaker-She/Her; Ila Davis-They/Them; Emerson Black-They/Them; Tristan Montgomery-He/Him; Liv Adams-She/They; Blair-She/They. Their collective final statement came as each actor layered new swaths of cloth over the Red/White/Blue backdrop; the full scope of the rainbow spread across the stage; the fabric glowed with the first rays of sundown.

"His idea was to develop a series of vignettes based on struggles and emotions teens faced during RFRA [Indiana Religious Freedom Restoration Act]. These kids would now be in their twenties, telling a personal story in context of Cis, straight, heterosexual, child of LGBTQ parents or partnership etc. How that might have affected them, their families or family relationships, legally, socially, medically and effect on teens who are homeless."

"The support of allies for the younger generations is a FORCE," emphasizes Asaykwee. "It is a beautiful, fierce movement of people wanting to find ways to work together... instead of to drive ourselves even further apart. There is much to learn from them."

Coming up at The District Theatre

Indianapolis Ballet "New Works, delivering a unique, up-close-and-personal experience in the intimacy of The District Theatre.

2 hours with one intermission; seating at 75% capacity, patrons must be masked at all times while in The District Theatre.

"Welcome to the United States of America" invited the Indianapolis Symphony Orchestra at the opening concert of the DeHaan Classical Series. I attended on October 2. The feel upon entering the lobby is austere. We must show proof of vaccination, be masked, maintain distance.

"Our first Saturday concert!" proclaimed James M. Johnson, CEO, from the stage. We cheered. And when Concertmaster Kevin Lin entered and acknowledged us in our spaced-out seating, we applauded him, too, and the whole idea of being in the presence of LIVE. What transpired over the next two hours was nothing short of splendid in concept and articulation. Every section of the orchestra had moments to shine, and every work, at least for me, expanded into a deeply visceral experience beyond the status of listening/hearing. Of the five works, three were new to me—the bookends by Day and Johnson and the central piece by Higdon.

"Exuberant and celebratory," writes Marianne Williams Tobias in her introductory notes for Kevin Day's three-minute "Lightspeed" that offered the feel of the breathtaking muscular take-off of an eagle finding its sweet-spot flow into its turn and triumphant high soar. Strings, percussion, woodwinds, brass, timpani together and separately exuding energy and gliding into a song, appropriately affording a sense of awe to take us into Samuel Barber's Concerto for Violin and Orchestra, Op. 14, a highly personal work for me. Op. 14 originally propelled the feel of the NEA-six states humanities councils exhibit on a barge: "Always A River: The Ohio River and the American Experience" that made its way down the Ohio, late Spring through Fall of 1991.

Violinist Augustin Hadelich approached this work with a luxuriant flow atop the ever-changing terrain pushing technical mastery. His sensibility again brought me into what first the Original Tribal People encountered along their navigating the Ohio River, in the time before European intrusion, a luxuriant flow that nevertheless could snag and scrape and thus impede if one became inattentive. The song of the flatboatmen can be heard in the second movement, giving way to 19th-century steamboat traffic, while the 'lean and athletic' third movement reflects our tow operations in the now current push-efficiency from Pittsburgh to Cairo and on to New Orleans.

Yet Hadelich, like the ever-watchful pilots, knows where the entrapments are and, with a sure sense of time, space and place, navigates each demand with a commanding presence, sans showiness. He was riding in sync with the orchestra through, in my mind's eye, a demanding 981-mile flow into the heart of the Northwest Territories. And that, too, sent me back to that slim book I mentioned in the comment about the play' FreedomZ.'

Article the Third, of The Northwest Ordinance of 1787 specifies: "The utmost good faith shall always be observed towards the Indians; their lands and property shall never be taken from them without their consent; and in their property, rights and liberty, they shall never be invaded or disturbed, unless in just and lawful wars authorized by Congress; but laws founded in justice and humanity shall from time to time be made, for preventing wrongs being done to them, and for preserving peace and friendship with them." Something to chew on in terms of what actually has transpired.

Hadelich sent us into intermission with a sprightly encore—Coleridge-Taylor Perkinson's "Louisiana Blues Strut" [you can catch it here: https://www.youtube.com/watch?v=QeWCmS9KdxM]

My acquaintance with Perkinson is with his scores for dance—particularly the Alvin Ailey Company. This piece, full of whimsy and tongue-in-cheek, elicited smiles at the Saturday program. Ingrid Bellman kindly verified it was the Friday encore as well

Jennifer Higdon's "Jumble Dance" from Dance Card opened the second half of the program. It defies tempting me to jig to this 4-minute romp.

Aaron Copland's "Quiet City" is a tour de force for solo trumpet in a close encounter with an English horn. ISO players Conrad Jones and Roger Roe, respectively, beautifully delivered the pathos as a call and answer with each other and the orchestra as a whole. It is a work of immense understanding of New York—its largesse and its ability to break your heart. The choice is yours. If this had closed out the program, I'd have gone home happy—not knowing what else I would have missed, including Copland's "Short Symphony" gifting lush jazz and frenetic sequences that at times during its playing reminded me of the crazy antics of the Tom & Jerry cartoons—now mostly banned throughout the world. Yes, these antagonists are not good role models unless you go by my mother's philosophy—you have to know people who aren't nice, so you learn not to be like them.

James Price Johnson's Drums: A Symphonic Poem, sent me home primed to make it back to The Jazz Kitchen. All Sunday, my body has been feeling the thrum of drums pushing the swag of jazz combined with the irresistible African-Cuban beat. It's an orchestral showcase.

The entire evening became deftly transformative through the largesse of Miguel Harth-Bedoya's conducting.

Up next for the ISO: