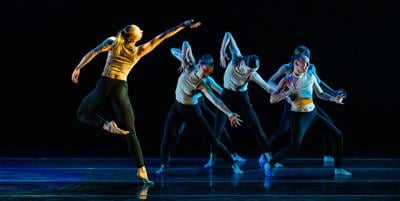 Six dancers spilled onto the IRT stage, body spelling acts of supplication and support, stretching upward from within repeating circular gobo layers.  The effect of this floor lighting, opening up to shafts of light from all other directions edging into the initial feel of the abyss, is transmitting an event into my space a half-hour drive from its originating location.

The small screen atop my desk immediately focuses my attention on the performance stage floor— its fluid geometric imagery is shifting and holding, in concert with movement in the undulating thrust and release typical to Martha Graham’s dance vocabulary.

Lighting designer Laura E. Glover has used gobo lighting effectively throughout her association with DK. I’ve commented about her close-knit creative partnering between movement and lighting in previous reviews from live performances on IRT’s  Main and Upper stages. Glover often speaks of lighting as another company dancer. But the effect of this 2020-21 season-closing program has gone beyond what previously I’ve witnessed.

I asked Laura Glover to help me put this into context.

“Lighting is about art and concept, which does not change between the larger format of the stage and the smaller one of the screen,” she emailed. “Our collaborative viewpoint works for either. What does change is how I use my tools, specifically intensity of the light. Ironically, subtlety and boldness in intensity both have to be put aside to make the cameras happy.”

Ah, the cameras. Distant from the place of dancing, I am witnessing remotely what is brought together in editing the input of cameras in the care of people witnessing in person from their specific locations around and off the stage. It’s a distant layer translating the aura to me; me, separated from the act of breathing in the same space as the dancers. And so, as I replayed in my mind the seven pieces I experienced via my small screen, the traditional concept of being present in seats of upwardly raked rows spun on its proverbial head.

Back to the top, to the opening dance, to Nataly Clevenger’s six-person work, titled “sakabu” which, in my limited Japanese vocabulary, translates to scream, shout, yell, exclaim—whatever it takes to gain attention. Here I’m watching acts of supplication and support rising from the floor and into the un-darkening abyss, gaining authority in surreal green morphing into lush, warm tones with the upward sweep of body, arms, head. Gratitude is life’s copilot. Lighting makes it possible.

In the following work, Paige Robinson addresses her realization of appreciation for embracing her body as a positive—she is awed by all the amazing functions it can undertake and accomplish. A body is a unity developing within personal uniqueness.  “Beneath the Embers” totally disowns the falsity of someone else’s image of what a body is supposed to look like. Four dancers with a look-at-me -as-I -am attitude are happily at home within their bodies. They’re showcasing awesome moves.

Emily Dyson takes the reality for service to the values of our Nation to a level of thankfulness. “True Sacrifice” is an anthem of gratitude for those who give and those who accept the final sacrifice. The bride, the widow; the groom, the fallen hero. In a pas de trois, we experience love, loss, gratitude. I wanted to stop the program to reflect more deeply, but I’m not technically adept with remote access. I was fearful of losing re-entry. So at the program’s end, I went outside and stood within the night’s embrace, reflecting upon love, loss, gratitude.

Sarah Taylor shared her insights about family and gratitude in the nuvo.net preview column for this DK program. “fest.” is a stand-in for a year-plus of absence from her family. Around the table, a mini-drama unravels. The physicality of two in seeming mortal combat over diverging points of view; the physicality of three taking sides, striving for neutrality, caught in the crossfire,  is as dramatically powerful as any re-run of “Cat on a Hot Tin Roof.”

Feel free to “Be Deviant,” advises Kieran King. Three dancers existing inside their own gobo light spaces do their own thing in spite of being within arm’s length of each other. Each doesn’t mind if they cross over spaces, move in unity, totally ignore. In doing your own thing, what/how are you adding to the well-being of society as a whole? “You are giving and gaining respect for difference” shows King through choreography that dares you not to smile because it’s deviant with a loving, caring heart and a mind open to selfhood.

Marie Kuhns, inspired by the lessons of good times and bad times, offers a series of “Stills of Growth”—a journey undertaken and constantly equipping her to move forward. Six dancers as herself reflecting onto the floor, embodying who she is becoming. Outward from ‘stills’ spill aliveness, active momentum.

Manuel Valdes’ “Reflections of the Wounded” closes the seven-new-works’ program with the full DK company of eleven on stage in varying dynamic configurations. How did each of us navigate through the isolation, posits Valdes?  For him, it was embracing the concept of unity despite the reality of separation; being a part of,  not apart from. The work plays out in three scenes, evoking an international embrace. Valdes reminds, “We’re in this together,” a mantra made especially poignant in the moments when two dancers touch and there are lifts. It’s ok; they’re a real-life couple—yes? Yes!

Each of the choreographers appeared in each others’ works along with the four who stepped aside from choreographing—they are Aleska Coffey, Stuart Coleman, Cody Miley, and Emily Franks.

Streaming through June 30;Purchase the Link to Watch

Digital access is $25 per household. Current DK Season Subscribers will receive an email with a code to watch the show at no additional cost. Flex Pass holders: contact dk@dancekal.org if you would like to use any remaining vouchers for this show.