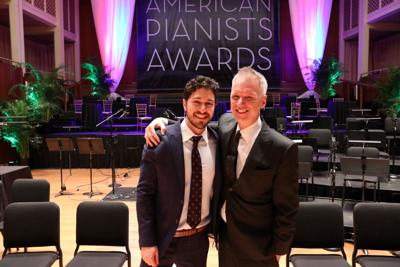 The American Pianists Association (APA) announced in Fall of 2020 that president and artistic director Joel Harrison will retire on June 30, 2021, after a 20-year tenure comprising nearly half the life of the APA.

The timing is at the fulcrum point of naming the 2021 classical winner and opening the 2023 jazz round. He will be remembered as nationally high profile, personally low-key. He shines the spotlight on teamwork stemming from his office on the Butler University campus, on every young pianist willing to step into APA's unique competition and prize structure, on the professionals who step in as judges and mentors, and on the volunteers who connect competition with community.

A professional pianist and a faculty member at Davidson College in North Carolina and at Mississippi State University, Harrison honed skills he brought to the APA at MSU, where he directed the Mississippi Piano Showcase and a Touring Artist for the Mississippi Arts Commission program.

But none of that experience could prepare him for the COVID-19 pandemic that 2020 would bring major challenges to the pianists that the APA has brought into the limelight.

When Emmet Cohen won the Jazz Awards in 2019, his array of performances was unfolding as usual. And then a challenge as unwieldy as it was unexpected hit early 2020. Not only was Cohen’s newly emerging career upended, but so was every other APA fellow’s forward momentum curtailed. The APA stepped in to assist with online concerts. We could watch and listen and applaud — and support.

Then in spring 2020, the APA  modified the 2021 Classical Awards so that each finalist would receive $50,000 — the amount of cash usually reserved for just the winner. Then at the close of the competition on June 27, 2021, one of the finalists:  Dominic Cheli, Kenny Broberg, Mackenzie Melemed, Michael Davidman, or Sahun Sam Hong, will be named the winner. This upfront monetary award, along with online program streaming by the APA, would be the lifeline for aspirants to stay centered.

I reached out with a Q&A at a juncture where he definitely is not a lame duck, but carrying forward to make this APA round as inspiring as have been all the preceding rounds.

RITA KOHN: What brought you to the position you now hold?

JOEL HARRISON: I knew some of the people involved at APA and had presented APA pianists in a festival I produced. When my immediate artistic director predecessor David Pocock accepted another position, he contacted me to ask if I would be interested. I said yes, and have never looked back!

KOHN: What insights/intentions did you particularly bring to your leadership role to the American Pianists Association and, at times working in unison with other organizations in residence with Butler University; what made those performance partnerships significant for arts in Indianapolis and beyond?

HARRISON: I had great respect for APA’s mission before I came, and it grew even more so once I got here. So I wanted it to flourish and have sufficient sustainability that it would serve generations of pianists. And I wanted it to be known worldwide for its high artistic standards. So I went about working on that. It took a while, but I believe we have achieved those goals. Locally the partnership with DK and others has been rewarding and fun.

KOHN: What are the best moments— whether known only to you and/or revealed to the public at large?

HARRISON: Early in my tenure, I was asked to be a cultural ambassador through the U.S. Department of State. Together with both jazz and classical winners, we toured under the auspices of the State Department in Europe, Northern Africa, Southeast Asia, the Caucasus, and the Middle East over several years. On one occasion, I was gone for nearly seven weeks, covering much of the Middle East. Incredible and magical experience! Another “best moment” was receiving a $ 5 million contribution to our Comprehensive Campaign from the Lilly Endowment, ultimately pushing us to exceed our goal of $10 million and achieve over $12 million. After the announcement from Lilly (in person) I went to my car and cried, knowing our financial future was secure and a longed-for goal had been achieved.

KOHN: What makes the role of an arts administrator rewarding/challenging under ordinary circumstances and suddenly in the time of COVID-19?

HARRISON: My “reward” as an arts administrator is most certainly found in the art itself and the artists we promote. Their level of commitment to the art and their supreme artistic gifts inspire me every day, and get me through any difficult times. While the issues related to COVID-19 are difficult and depressing, again it is the art and our artists who “get us through” these times. Without that inspiration, I am not sure I could cope with the challenges.

KOHN: What makes the APA essential to the vibrancy of greater Indianapolis and beyond?

HARRISON: Hearing young, emerging artists, such as those classical and jazz pianists who are part of our American Pianists Awards, brings world class talent to the city. Our competition process has a built-in community outreach program called Concerto Curriculum, in which we are able to take these brilliant artists into every corner of our community, bringing truly great art to any and all willing to listen. At the same time, because the competition process takes an entire concert season,  by conducting the competition in the way we do we are also bringing essentially a concert series of jazz and classical piano music to the city.

KOHN: What, when you take leave of this position, will you take with you for the continuation of a life of joyful service?

HARRISON: I was a professional musician before I came to APA —  it is simply in my DNA —   and that dedication to the art will continue unabated, whether I return to being a performing pianist, an enthusiastic supporter or a volunteer for an arts organization. Frankly, it is my source of energy, and keeps me going, no matter what I do.

KOHN: Do you have anything to add?

HARRISON: My nearly 21 years at APA and in Indianapolis have brought much joy. I believe I have been in the perfect place in every respect and feel immensely lucky. I am grateful to all of our pianists, from whom I have learned much. And grateful to all our supporters, whose generosity has been without peer. It just could not have been better!