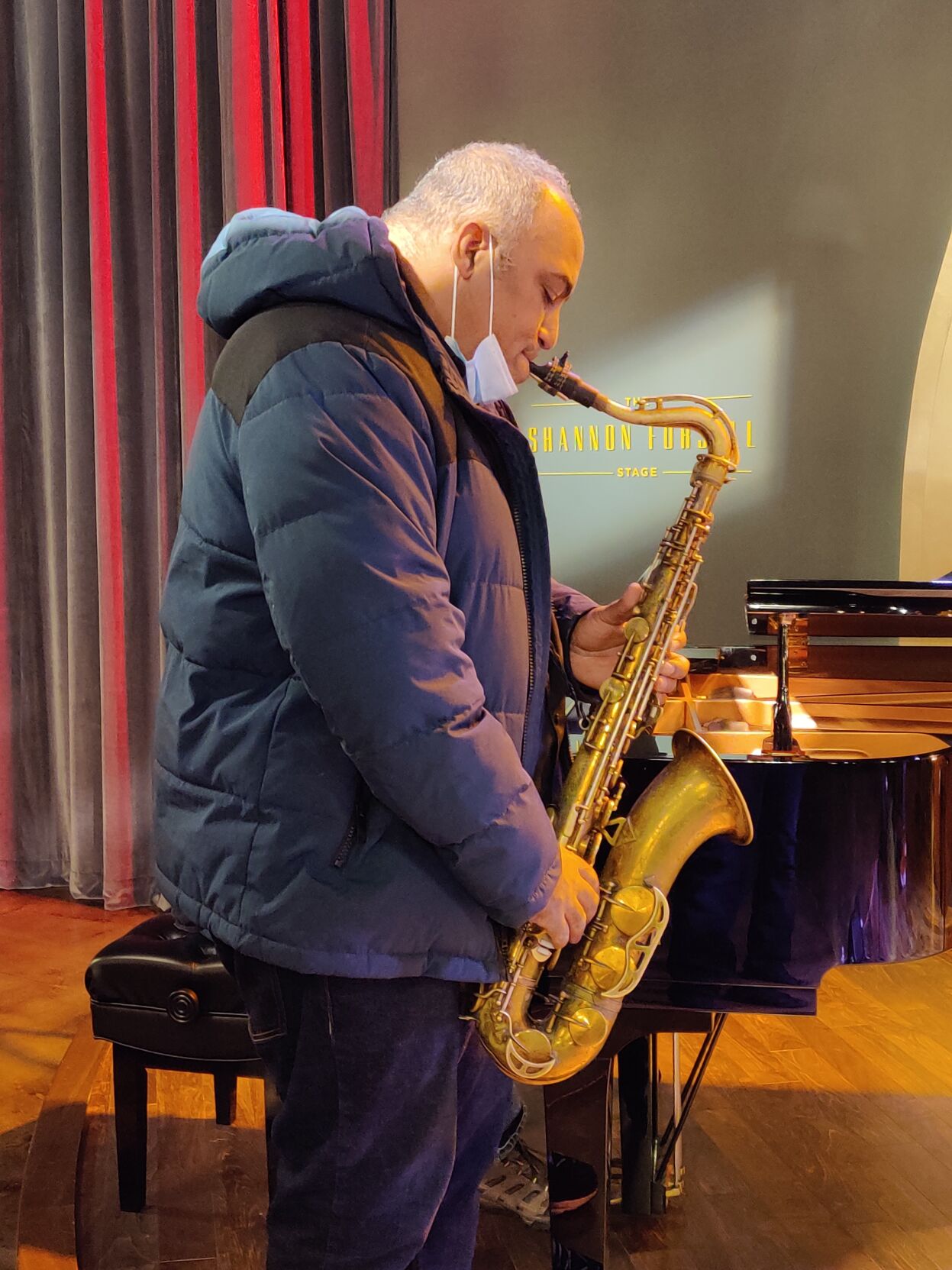 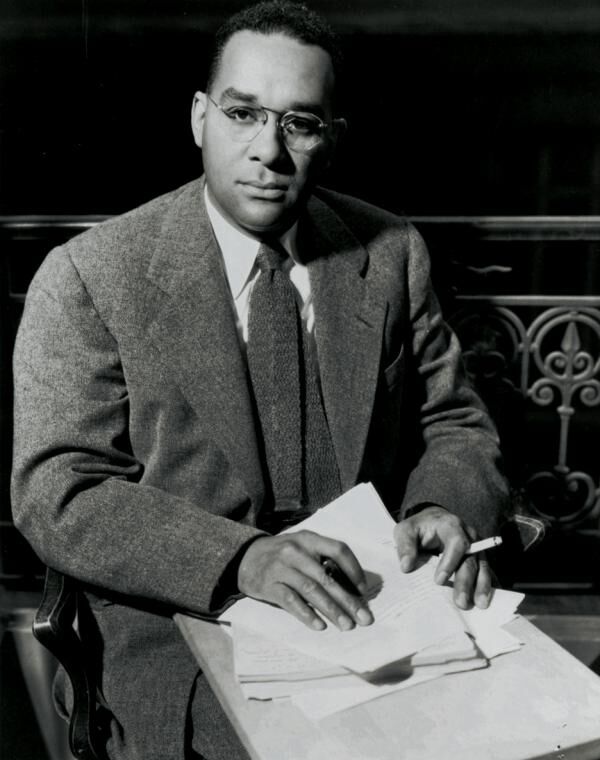 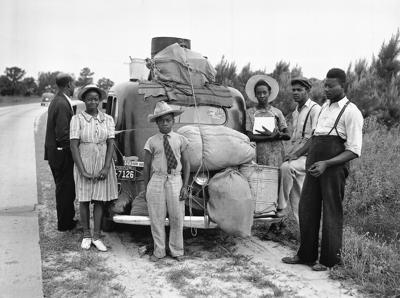 In 1927, a young man by the name of Richard Wright — who would later become one of the most prominent African American authors of the 20th century —  arrived in the Gap area of Chicago. It was during the Great Migration when over a million Black people left the Jim Crow South and came north.

Wright’s journey informs The Voodoo of Hell's Half-Acre: The Travelin' Genius of Richard Wright from Natchez to Chicago. The free multimedia theater presentation, written by Lasana Kazembe, revolves around the life, art, and legacy of the novelist and poet. Filmed at The Cabaret —   incorporating jazz, poetry, spoken word, and visual art —  Voodoo premiered online Feb.10 and a fully edited version will be broadcast on WFYI Public Television sometime this spring.

“[Wright] settled in the Gap area of Chicago, which is right around 35th and State Street, right around that area, which is the infamous Black Belt area,” says Kazembe, assistant professor in the School of Education and in the Africana Studies Program at Indiana University-Purdue University, Indianapolis. “I know that area ... I'm from an area farther south, but that history was just there. So as a poet, as a historian, as a writer, I'm always looking for ways to make these connections, and to make the history alive. So I thought it would be wonderful to do a production that brought these various elements together.”

Kazembe wrote what he calls his “blues poetry opera” in 2015, and he conceived it in a coffee house in Chicago where he used to go to write and study.

“People who know me know that I am a serious student of [poet] Amiri Baraka and, throughout his life, he had this thing that he would do where he would develop these jazz operas. His jazz operas were really consisting of him reading poetry, alongside major jazz artists in New York and he did about maybe five or six of these jazz operas.”

Kazembe is also a serious student of Wright, who wrote Black Boy, Native Son, Uncle Tom’s Children, and many other works. “I have a decades-long love affair with Richard Wright's work in literature,” he says. “I started reading it when I was around 15 when I first encountered it. And so it's been just an ongoing affair and he's just such a major imprint, a deep, deep imprint, and a long shadow still on the culture. I teach Africana studies as well so I've always been fascinated with the way Black History happens. Specifically, Black American history.”

He conceived of a work in poetry, music, and narrative.

“But then I wanted to add additional multimedia elements,” he says. “At the time we did it in Chicago I was working with a group of musicians there and 2015, 2016. And we did about eight concerts in Chicago. We would have images; young little girls jumping rope, roller skaters, just all kinds of just wild multimedia stuff going on. That was the impetus back then.”

The performances, Kazembe says, generated “nice, intimate crowds” at Transition East studio in the South Shore area of Chicago. The musical aspect of the performance in that space featured the conga, the djembe drum, the talking drum, and cello.

“This time around we don't have those elements; we have different musical elements: sax, upright bass, piano,” says Kazembe. “We didn't have piano before and now we have piano … And I wanted it but I couldn't get it but now I have it; vocalists. So we have two vocalists. And then in the first configuration, I did all of the poetry, plus the narration is prose narration. And now we have an independent narrator.”

The production features some of the best-known players in the Indy jazz scene, including Jazz Kitchen regular Rob Dixon on saxophone —   also serving as the musical director —  and Steven Jones on piano. Filling out the rhythm section are Brandon Meeks and Kenny Phelps. Allison Victoria and Okara Imani are the vocalists, and Asante Children’s Theatre Director Keesha Dixon will serve as the narrator.

Indianapolis visual artist Shamira Wilson will also be on stage.

“The Richard Wright presentation was a fabulous way to revisit his work, and the legacy of his writing, such as Black Boy,” says Wilson. “Typically my work is very solitary so it was also great to be in community with talented musicians and artists that I'm honored to work with for the first time. Being live on stage, this presentation stretched me to paint more quickly and to capture the spirit of the music and spoken words which resulted in a piece based on Wright’s experiences and writings on migrations.'

You just might hear reverberations of the Black Lives Matter protests of the summer of 2020 in the performance. When Wright arrived in Chicago, it was only eight years after the Red Summer, in 1919, that Kazembe describes as “an intense period of racial terrorism all across the country.”

“So, this is the Chicago that he comes into,” says Kazembe, setting the scene. “It's smoldering, it's tense, it's divided, it’s hostile, it’s rigid. [It’s also] chock full of these opportunities, more so than downside, but it's also got this other edge to it. He came to this realization afterwards that he’s left the Jim Crow South for the Jim Crow North. The only thing that’s really changed is the zip code and climate  So to that degree, to that extent, there's some definite alignment between the strife and the racial terrorism of that era. And right now, it's like all history is a current event.”

For Kazembe this performance is only one part of a project funded by a New Frontiers of Creativity and Scholarship from Indiana University. The final products will include a scholarly article, the development of a language arts curriculum, and “a public exhibition in images and Haiku” as Wright was a prolific Haiku writer. Kazembe, who has published books through Third World Press, expects to see The Voodoo of Hell’s Half Acre appear in book form.

WFYI Public Broadcasting is filming and producing the performance, but the production was substantially delayed by COVID-19.

The late journalist and host of the WFYI arts program Curious Mix, Jill Ditmire, whose death was announced on Feb. 1, acted as a matchmaker between Kazembe and Rob Dixon and the principals at WFYI who would produce Voodoo.

Kazembe had reached out to Ditmire recently to update her on the production. “She told me she had been in a bad car accident, and was at home, had been off of work for a while because of that,” he says. “She was looking forward to going back to work.”

The performance is dedicated to her memory.