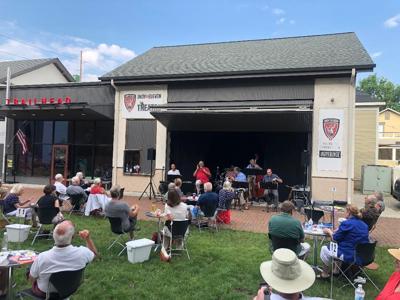 When I started reviewing IndyFringe performances in 2012 for NUVO, I can’t say I was much of a theatergoer. But IndyFringe co-founder Pauline Moffat helped turn me into one. Now that she’s announced that she will step down from her position as IndyFringe CEO, I didn’t want to let the moment go without some words about what IndyFringe has done for the Circle City.

IndyFringe is an annual theatrical festival featuring everything from rogue Elvis impersonators and magic shows to serious drama and musical comedy. (It’s also the name of the eponymous nonprofit organization that organizes the festival.) The 2018 festival included just about every imaginable take on Shakespeare —  including an offering titled Shakespeare and Zombies.

While Fringe is a popular theatrical festival concept —  the first Fringe festival took place in Edinburgh, Scotland in 1960 —  it didn't show up in Indianapolis one day through osmosis. Moffat made it happen, every August, in the Mass Ave Cultural District.

For Moffat, it was about more than bringing offbeat theater to Indy for ten days each year: it was about building a sustainable theater community that provides opportunity for theater professionals.

“When we started the Fringe, it was for a specific reason: how do you attract and retain young professionals in the city,” Moffat told me, a week before the 2017 festival was to take place. “It was an initiative of the city and CICF [Central Indiana Community Foundation] and all of those young Butler grads who started with the Fringe have stayed with the city. And they have built their own little theatre companies. They are really the foundations of the Fringe every year.”

Sadly, this year’s Fringe was canceled due to COVID-19.

During my first venture as an IndyFringe reviewer in 2012, I saw eight performances over the span of two days, including one standout titled The Fabulous Problemas. It was produced by an outfit called Celebration Barn Theater based in Maine. This is what I wrote about their production:

It was an awesome thing, I thought, that Indianapolis could support such inspired, crazy, and hilarious theatrical cross-fertilization. There were also many locally-based actors who participated in Fringe each year, and equally-inspired local offerings. Of course, there also were also some duds. But separating the wheat from the chaff was part of the fun of being a Fringe reviewer.

I started reviewing theater more often, year-round, and I kept noticing some of the same great actors popping up in different performances, in different venues. Actors like Kevin Johnson, Allison Reddick, and Rob Johansen. It seemed to me that IndyFringe had become part of the glue —  along with the IRT, Phoenix Theatre, Theatre on the Square, and others —  that kept theatrical talent in Indianapolis.

I was sad when IndyFringe Fest was canceled this year, but I also realize that the theater’s offerings, and impact, go well beyond IndyFringe.

With its theater building located at 719 E. St. Clair St. alongside the Indy-Eleven Theater, IndyFringe has been a full-fledged year-round theatrical organization since 2008. In the next week, there will be an opportunity to savor some of the fruit of its year-round work.

Upcoming, from Oct. 1-10 is OnyxFest, the city’s only festival of work by Black playwrights, presented jointly by IndyFringe and the Africana Repertory Theatre of IUPUI. (This performance, like all IndyFringe performances through Halloween, will take place outdoors, in the pocket park adjacent to the theater.)

In addition to promoting African American voices, IndyFringe has taken the lead in promoting female voices. Each spring, the theater has also hosted DivaFest, a juried festival of the work of female playwrights.

IndyFringe has become a Grand Central Station, of sorts, for theatrical cross-collaboration. The theater’s stepping up to a management role for the District Theatre —  formerly Theatre on the Square —  in April, 2018 can be seen as yet another example of this work. All of this cross-pollination, I think, has helped make Indy’s theatrical scene a more diverse and equitable one.

But COVID-19 is threatening all this progress. In addition to claiming the life of longtime theater producer and director Bryan Fonseca, it has thrown the future of the Indy theater scene into doubt.  The nonprofit arts industry in the Circle City is facing a $50 million loss as of September, due to COVID-related cancellations, according to the Arts Council of Indianapolis. There have been some stopgap measures, but the largesse of big-pocketed donors can only go so far.

The theaters need ticket sales, and Zoom events are not going to cut it.

For theater to fully return, the virus needs to be brought under control. But some sense of an open, tolerant society is also essential, a point that is well-illustrated by the final scene in the 1972 film version of Cabaret, a film set in Weimar Germany just as the Nazis are poised to take power. I fear the chaos the election may bring, but I do not doubt the resilience of Indy’s theatrical community.

The IndyFringe Pocket Park, adjacent to the Indy Eleven Theatre, can be seen as an example of this resilience. It’s perfectly positioned for the outdoor performances that will continue there through Halloween. (The Fonseca Theatre, which was also doing outdoor performance before COVID forced them to cancel, also plans to continue despite the death of its founder.)

Moffat’s gift is her ability to forge relationships, develop partnerships, and work with contingencies in the service of her theatrical vision. Hopefully, IndyFringe’s new CEO Justin Brady, who headed New York City’s New 42nd St../New Victory Theater, will be equally adept in adapting to this scary, pandemic-prone world.