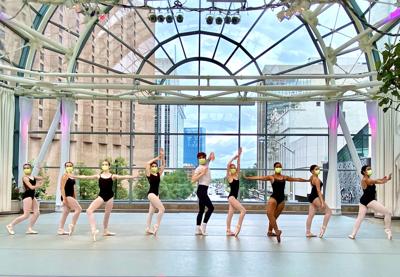 At the close of the concert on July 16, the impact of the choreography, set upon poignant choices of music, along with the marked simplicity of costuming, swept over me. I needed time to absorb what observedly moved not only me but an enthusiastic audience of family members and friends and those who stopped to watch on their way to elsewhere within the Circle Centre Mall.

Constructed in 1995 as an art performance and gallery venue, owned and operated by the Arts Council of Indianapolis, the ArtsGarden is a seven-story tall glass and steel dome spanning the intersection of Washington and Illinois streets. In its walk-through mode as a pedestrian connector between the distinct sectors of Circle City Mall, you can absorb a 360-degree bird's eye view of the heart of downtown.

As a dance stage, ISB utilizes the glass west wall as the backdrop for its annual showcase, highlighting its ballet curriculum, modern, jazz and tap. In previous columns, I've remarked about the effect of looking out upon the late afternoon horizon and how the sky plays into the performance of each choreographed piece. However, this time, it was the feel of weightlessness —of wafting in space—after a year and a half of being tethered in place.

At the top of the program, I suddenly was let loose to drift outward, upward upon the opening strains of "Passacaglia" by the musical duo Secret Garden [Norwegian composer Rolf Løvland and Irish violinist Fionnuala Sherry]. Five dancers in black, personifying grace, precision, and elegance, unfolded a courtly, open landscape.

And then I caught my breath. Memory triggered the year 1995; the year Circle Centre Mall opened, and the year Secret Garden made its debut. [Don't ask why my mind makes these kinds of connections—it just does]

But there is something more—both have persevered through episodes of trauma.

On reflection, I realized Victoria Lyras set me up to plum deeper than the usual' sit back, relax, enjoy the show.' Yes, it's brilliant programming to open with a showcase of what students in the highest level of ballet classes can achieve. Everything else is what leads up to this attainment. But it's not just technique matching music; there's a meditative discernment of context within which the music is written. Choreography is plumbing meaning; dancing is delivering that elusive inner texture.

There was no stinting from this challenge by the nine Division 1 modern dancers that followed. Set on "Sea Murmurs" by Mario Castelnuovo-Tedesco, Roberta Wong choreographed a moving picture book. Floor-bound or stretching upward, we were in a flow of happenings. Castelnuovo-Tedesco [1895-1968] was a master for composing as a character study. This 1933 work came during a time of worldwide and his personal trauma. If you can make the time to do so, read his insightful autobiography, "Una vita di musica" (Cadmo, 2005), edited and translated by James Westby.

At this point, I decided to veer from a review of the 14 works as they appeared on stage, and instead to group them by genre, to show the oeuvre of the choreographers and the challenges met by each level of students.

There's a touching story emerging from Wong's Division 3 Modern dance number on "Dreamland," composed by Alexis Ffrench. I wondered, what is being pondered in and out of the varying configurations by a lone male amongst six female dancers? I searched and found this: "U.K. contemporary pianist and composer Alexis Ffrench releases details of his new studio album 'Dreamland.' Alexis' wish for 'Dreamland' is for it to be a source of comfort in troubled times for the listener; an album to comfort, rebalance and inspire change."

For Division 4 Modern, Wong drew a two and half minute segment from Steve Reich's "The Desert Music," a setting of texts by the American poet William Carlos Williams (1886 – 1963) that asks us to consider humankind's connections with nature. Five women shift sculpturally as a series of stories we need to contemplate.

With Anderson's Waltz, Filipe Aragão upped the tempo for twelve Division 2 ballet students. Leroy Anderson [1908-1975] had a long association with the Boston Pops. This soft shoe mini-drama in under five minutes is the epitome of getting in and out of shifting banks of fours…and something more…

As a Petite Valse, Abigail Bixler created a panorama for a soloist and a corps to spin a series of relationships to the 19th-century ballet composition by Charles Gounod. The Division 1 students delivered with verve.

Camila Ferrera's sculpting, group precision, mechanical moves, sporadic claps, and kicks, on the other hand, tasked nine Division 3 ballet dancers to lift Ezio Bosso's "The Night Ride" across a surreal landscape-or is it weirdly real? The imagery has been unsettling me and shows no signs of letting go.

Happily, the Division 1 Tap routine was pure show biz for the nine dancers that earlier were in Wong's "Sea Murmurs." Here they sizzled in Emily Nord-Womersley's choreography for "Fit as a Fiddle," from the 1932 musical by Al Hoffman and Al Goodhart.

Nord-Womersley, with "Taking a Chance on Love" for the twelve Division 2 Tap dancers, brought us into the realm of Vernon Duke, who composed the 1940 musical "Cabin in the Sky," starring Ethel Water, Eddie "Rochester" Anderson, and Lena Horne. It wasn't identified, but it seemed evident from the audience reaction we were in the throes of Frank Sinatra's version. The moves made us all smile, yet I remembered the dark side to the story about Vernon Duke. In the early 1930s, when he had to flee to the U.S. from the Nazi grasp on Europe, he had to shift from his classical oeuvre. Following George Gershwin's advice, in addition to composing for musicals, Duke spun out solo songs—including "April In Paris," "Autumn In New York."

With "Come Alive" for five Division 4 Jazz dancers, Levin initially introduced us to songs from the recent musical, "The Greatest Showman," by Benj Pasek & Justin Paul. The audience grooved along with the five dancers—sassy in loose leaps and swirls, with attitude to spare.

This especially close connection with the audience continued for Levin's Division 2 jazz dancers taking on the deeper thrust within "From Now On" and the reflective "This Is Me" for Division 1 dancers.

We were sent home with the flamboyant "The Greatest Show" by Division 3 Jazz dancers.

But the sensibility of this public program closing the ISB 2021 summer intensive underscores there's more beneath the public dazzle of the Barnum and Bailey Circus, just as there is more lurking under the COVID-19 pandemic.

Dance brings us joy and beauty, and, most assuredly, wisdom. The better part of production wisdom was the simplicity of costuming.

Taking me back to the top, I'm feeling the resonance of Passacaglia: "Somewhere within us all, there is a secret garden. A garden in which we can seek refuge when times are rough or retire to, in joy or contemplation.

For identification, if needed per a photos: