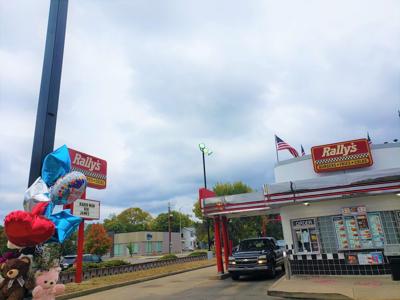 It was a strange sight at first —  a tall, slim, African American on the sidewalk at the intersection of 38th Street and College Avenue, arms outstretched, feet gliding, body twirling languidly.

But after many years of this, the site ceased to be strange and instead was familiar, and even lovely. Motorists honked their approval, at which point the dancing man invariably faced the honk, bowed his head and threw a hand high into the air. It was more than a wave, more than a salute. It was almost a blessing.

The dancing man had been doing this, at 38th and College, since the 1970s.

His name was James Snow. Mr. Snow died earlier this week at 77 of natural causes. He was found in his bed by police who’d been asked by Mr. Snow’s family to perform a wellness check.

“They told us it looked like he went to bed and went to sleep,” said his sister, Hazel Young.

The neighborhood took it hard. “Is Radio gone? Aw, man!” said Dareion Stevens, a barber at Kenny’s Barber Shop, on the northwest corner of 38th and College. Stevens hadn’t heard the news. “Radio” was one of Mr. Snow’s nicknames. The others were Dancing Man and Guitar Man, the latter because he occasionally moved to his own music that he performed on a guitar.

“He’d been out there all my life,” said Rick Covington, who was getting his hair cut at Kenny’s. Covington is 27. “One time, when I was a kid, he told me to be careful and to cross the street at the light.”

“He was a great man,” said Charlzetta Denson, who works at the Rally’s Drive-In on the northeast corner. Mr. Snow ate lunch there most days. “He’d have the All-American every time, and a Sprite,” Denson said. The All-American is a cheeseburger with tomato and mayonnaise. “He’d be here 24-7, dancing, laughing, talking about God.”

And asking for nothing. Most street performers seek donations, but Mr. Snow not only didn’t seek them, he turned them down. Stevens, who could see Mr. Snow cavorting out the window of the barbershop, recalled more than once offering to buy him lunch, “but he’d say, ‘Nah, I’m cool.’”

By staking out a major intersection for his stage, Mr. Snow was extending his reach far beyond the neighborhood. Every day some 60,000 cars pass through College Avenue and 38th Street.

Most motorists just smiled or waved at Mr. Snow, but more than one stopped, parked, approached Mr. Snow, and danced with him. More than once, young people with guitars performed for him. In 2008 the Indianapolis rock band Born Again Floozies wrote a song about him, “Prince of 38th Street (Freak Flag).” They performed it for him on his corner. There’s a video of it.

The Indianapolis Star did a couple of stories on Mr. Snow. I wrote one of them. I spent a day with him in July 2011. I parked, got out of the car and approached him. I expected a showboat. Mr. Snow, after all, had positioned himself for maximum public exposure, and he had reason to be cocky. He moved well. Holding a boom box on his shoulder (blasting mostly Smokey Robinson, Curtis Mayfield or the Beatles), Mr. Snow could cross College Avenue’s six lanes at a jog and execute a full 360 without altering his speed or direction, his free hand slowly sweeping the air, his head steady as a church.

But he was not cocky, he was modest, soft-spoken, gentle. I watched him find a guy’s checkbook then ride his bike several miles, to 40th and Boulevard, to return it (he received no reward). He brushed away bugs rather than kill them. A Rally’s worker asked him to get her a Mountain Dew. “Hey Radio, bring me a Mountain Dew?” she said. Mr. Snow rode his bike to a grocery store at 34th and Central and bought her one. I never saw him proselytize.

Mr. Snow declined all offers of drugs and drank alcohol only when he was sick. Then he’d mix Old Grand-Dad with orange juice. “Takes the cold right out of you,” he said.

He owned several bicycles but no car. He lived by himself in a small house near Douglass Park. He was never homeless, as some people believed.

It was clear to me that he had some kind of cognitive disability, but he was not out of his mind. He remembered my name months and even years later when I’d occasionally stop to say hi.

He had an exotic back story, which was told to me by his sister Hazel: Mr. Snow was born in 1943 deep in the Jim Crow-era South, in Holly Springs, Mississippi. He was one of 11 children. His father was a sharecropper, which meant he worked some land owned by a white man in exchange for a cut of the profits plus the right to rent a tiny tarpaper shack on the grounds in which to house his family.

Sharecropping was barely a step up from slavery.

As a teenager, Mr. Snow, who though gentle was physically imposing at more than 6 feet tall, ran afoul of the white landowner. His family sent the boy north to safety, to Indianapolis because his older sister had come here several years before and had got a good job and was settled. This was around 1960.

Just five years earlier, a black teenager named Emmett Till, two years older than Mr. Crow, ran afoul of white people in Money, Mississippi, 100 miles from Holly Springs. His alleged crime was whistling at a white woman. Till was dragged from his bed by white men, and three days later, his bloated, badly mangled body was found in the Tallahatchie River. Till’s lynching, and the travesty of the acquittal of the men who flat out admitted doing the job, was an early rallying point for the Civil Rights movement.

Mr. Snow arrived in Indianapolis and soon got a job in a warehouse. He kept it for several years before going on disability.

Exactly what possessed him to spend his days dancing at the corner of 38th and College is unclear. “You dance,” he told me, “and it takes stuff off your mind. I like the fun-ness of it.”

His sister used to worry about his safety. The 3800 block of College Avenue is not the safest part of town. There are muggings and shootings there. “We want him home watching TV,” she told me in 2011. “Why can’t he dance in his backyard?”

Once Mr. Snow was punched in the face, and another time someone smashed his boom box. But those incidents happened a long time ago. Nothing bad happened to Mr. Snow in recent years. “Everyone knew to leave that man alone,” said Jack Arvtes, who was in Kenny’s Barbershop the other day. “He’s good, he’s cool, and everybody knew it.”

His sister came to understand she had little to fear. “I kind of saw he was making a dent on that corner,” she said Saturday. “I didn’t realize it for a long time, but I think now that was his ministry. That was his purpose.”