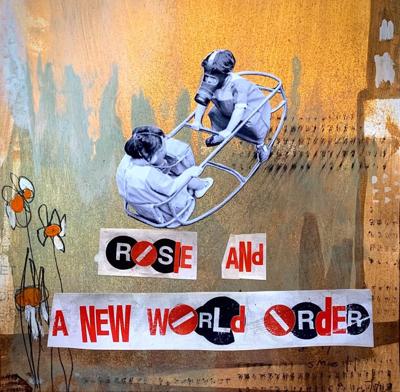 Even in the midst of a global pandemic shut down, artists Al Diaz, Jilly Ballistic and Matthew Aaron are not slowing down. They are individually still creating viable art in their respective Brooklyn and Indianapolis neighborhoods that reflect these troubling times, and have come together to collaborate on a new book entitled Rosie and A New World Order.

A pocket full of posies,

We all fall down.

Shortly after the beginning of our current apocalyptic pandemic, Indianapolis based artist Matt Aaron was thinking about that nursery rhyme from the plague and thought about how we were in the midst of our own modern-day plague. Inspiration Struck.

“I hit up Al (Diaz) because we need honesty,” Aaron tells me recently.  “We need to confront our pain. Al has proven time and time again he is not afraid to use his voice. When I told him about my idea he never skipped a beat. Instantly the ideas started flowing between us, just like every time we’ve ever worked together.”  Diaz, who was one of the original New York City graffiti taggers, who has innovated street art from its infancy, is currently taking NYC wet paint signage put up whenever graffiti is covered over and making a new more evolved form of street art.

It is a genius concept and the cut-up punk style typography that contrasts words like “CONFUSED,” “OUR OWN EPIC PLAGUE” and “MONUMENTAL FAILURE” with Aaron’s dystopian backdrops create an accurate feeling of dread that uncannily matches with the current world climate. “My appropriation of subway signage was originally a fusion of graffiti, both written messages and text-based art,” Diaz explains in an e-mail exchange. “It has become more of a studio practice for me due to the legal ramifications of unsanctioned installations and the fact that I am no longer all that young.”

Once Matt and Al started the project, they quickly realized another voice was perfectly suited to the project. Enter Jilly  Ballistic a Brooklyn based graffiti wunderkind whose Gas-Masked heroes seemingly stepped through a portal from a paranoid yesteryear to bring equal parts humor and foreboding to the modern-day NYC subway movie posters and ad signage.

“Jilly is a natural part of our process,” Aaron says. “Her additions brought the pieces to life, adding a human element to the poetic catastrophes that Al and I had started.” “The gas mask is timeless.” Says Ballistic regarding her use of gas masks,  “Unfortunately it represents a lot of what we face as a country and even as a species: climate change, war, failed politics, corruption... I can’t think of a time the gas mask isn’t relevant.”

“When the pieces came back to me in the mail, all finished up, I knew we had something I would forever be proud of.” Matt adds, “So began the search to make something that would last, a book. Clearly we had to move as fast as possible. Time is of the essence for a myriad of reasons.”

“Putting up work during the pandemic feels strange,” Jilly says about her current working environment. “There’s no single word that comes to mind. The streets are empty and it feels eerie, there’s a bit of paranoia and sadness, also, some anger and rebellion. We’re not alone in this and we’re entering a new world afterward, together.”

I have lived through the turmoil of the 60’s, 70’s, and 80’s, the traumatic AIDS epidemic, the devastation of 9/11, economic recessions, heroin addiction, homelessness and incarceration.” Diaz adds. “This has been the backdrop to my life and as a result, my messages are never sugar-coated. Rosie was initiated by Matt Aaron. We have done quite a bit of collaborative artwork together. We felt the current pandemic was an absolutely essential topic for discussion in the way we do it (our language if you will).”

Described as “Nursery Rhymes for Our Modern Plague,” the trio has produced a work that is stunning in its light-hearted dread, using Diaz’s punky typefaces, Aaron’s chilling backdrops and Ballistics’ gas-masked WWII circa men women and children highlighting how the fears of yesteryear weren’t that far removed from today’s reality.  Rosie and A New World Order is a harrowing and shockingly accurate necessary souvenir of this time in our collective history.