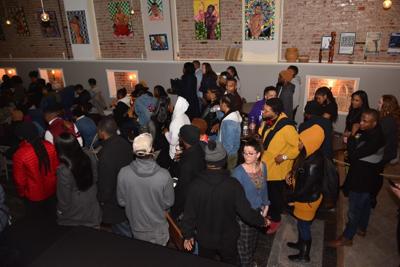 When asked how she’d describe That Peace Open Mic to a stranger, Mariah Ivey has a short and concise pitch.

“That Peace Open Mic is a radical space for art, culture and community,” says the event’s founder. “We are about music. We are about impacting and shifting culture. But most importantly, we’re about creating a space where Black joy is centered.”

On Thursday, July 30, That Peace Open Mic will celebrate its five-year anniversary with a socially distanced celebration outside of Indy Convergence. Ahead of the already sold-out event, our Seth Johnson caught up with Ivey to discuss That Peace Open Mic and its organic growth over the years.

SETH JOHNSON: Before we get into discussing That Peace, I’d like to catch up with you on a personal level. As an artist yourself, how has the COVID-19 pandemic affected you creatively?

MARIAH IVEY: It’s interesting. When this quarantine started, I was seeing a lot of posts and memes about folks using this time to create. People were saying, “If you don’t have an album done by the time this quarantine is over, you weren’t doing something right.” But honestly, these past couple of years I’ve been going nonstop and doing shows nonstop. So it felt good to just create and sit with my creation versus creating for the next show. So I’ve definitely been doing a lot of writing and a lot of creating but not feeling pressure to put it out.

JOHNSON: With the fifth anniversary of That Peace Open Mic nearing, can you give me some background on the open mic’s origins?

IVEY: That Peace started in July of 2015, and the original goal was to create a space that felt like family. It didn’t feel so much like a show but like a jam session. Like if people just walked into your living room and had a chance to vibe out with each other.

It was also a space that targeted young adults — I would say our target is 18 to 35. That’s mostly who I see at the shows. With Indy being a city that largely caters to a 21-and-over crowd, we found that there just weren’t places for people under 21 to go and get quality art. So that was also a goal. It was a space where all art forms were celebrated too.

JOHNSON: Where were the first installments of That Peace Open Mic held, and what were they like?

IVEY: We started at a venue called Write On the Poetry Spot, which is on the west side of Indianapolis. It’s extremely small but is also one of the longest-running poetry venues in the city. If you know any poets, they’ll probably tell you they’ve performed there or curated an event there at some point.

I would say it comfortably fits 50 people with a stage in the middle. So a lot of those shows were extremely packed out. We were shoulder-to-shoulder. It was extremely hot. But the energy is what everyone came for. It felt like family, and we had the live band. It just felt like a good vibe. And then, we moved to Fletcher Place once we outgrew that venue.

JOHNSON: What would you attribute to the success of That Peace Open Mic in those early years?

IVEY: Authenticity, as well as the community being heavily involved in determining what kind of programming we had and what kind of features we would bring in. Everyone who comes to our shows has an input in that, and I honestly think it just became what everybody wanted it to be. I’d say that’s why it continued to grow.

We’ve been pretty true to our intention in that and haven’t really strayed too much from the original intent. Because of that I think it’s authentically taken shape.

JOHNSON: That being said, what has That Peace Open Mic become in the last year or so, and how has it remained true to those communal roots?

IVEY: It’s definitely expanded. That Peace has become much more than an open mic. It’s become a space for workshops and critical dialog. It’s become a space where art and wellness are promoted. Last year, we kicked off our first annual festival called Ubuntu, which was all about art, wellness and connecting people back to locally sourced food alternatives. So it’s truly expanded around the interests of the attendees, and it’s kind of become its own little community.

JOHNSON: What went into planning the event you’ve put together outside of Indy Convergence for the five-year anniversary of That Peace Open Mic?

IVEY: It’s not a show if you don’t have challenges. [laughs] If you would’ve asked me what the five-year anniversary would’ve looked like in January, I might have had a completely different rundown than what it is now. This pandemic came in, hit us hard and we had to go back to the drawing board.

We went back and forth on whether or not we were going to have a show, just out of precaution and safety for everyone. But we thought it through, and it felt right to put this together. So although it’ll look a little different, it’s still exciting.

It’s going to be an intimate show. We sold tickets online, and the show is now completely sold out. We only allotted for 50 people to attend so that we could manage social distancing guidelines. We have everything in place to make sure that it’s still a safe event.

It’ll be outdoors on the same street as our home venue, which is Indy Convergence. In a way, it’s almost even better than the original plan. Although it’s more intimate, it allows us to curate a special experience for those who were able to grab tickets.

JOHNSON: What all will the show consist of?

We’ll have two vendors. One is called This Flower Grows. That’s Carmen Johnson, and she makes organic teas, juices and smoothies. We’re still going to be able to have that available since it will be outside. We’ll also have another vendor named Joy Bible, who runs Sol Shine Beauty. She does skincare and body products. TPOM will also have our merchandise table set up. We just released a new line of bags in honor of Black women.

JOHNSON: As an artist yourself, how has That Peace Open Mic been beneficial to you and your creative endeavors?

IVEY: It’s introduced me to a lot of new artists. I think that’s one of the joys in hosting a monthly show — being able to come across new people every single month. So relationships have been built.

I would also say it’s helped me to hone my skills on a curation side. As a curator, host and someone who coordinates events … that’s a whole different skill set than it is as an artist or performer. So it’s helped me build that skill set.

Big Car Collaborative: Not driving on empty during the pandemic