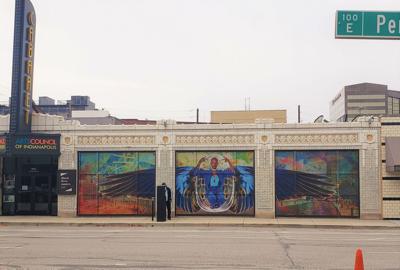 On Oct. 23,  the Arts Council of Indianapolis will host its (Re)Start with Art fundraiser, which will be held virtually this year, with a goal of raising $1 million for its Keep Indy Creating Relief fund.  While the Arts Council has been busy during the COVID-19 pandemic supporting artists with emergency grants and commissions, it has also been busy preparing to take a mirror, as it were, to its own programming and organizational structure.

In June, the National Endowment for the Arts announced a $20,000 award to the Arts Council of Indianapolis to create the Equity Ambassadors to evaluate its programs, organization, and services. It is one of the programs that the Arts Council has used to affirm values outlined in its equity statement recently, but this one ventures into new territory.

“At this stage, the possibilities feel endless,” said Rishard Allen, the Arts Council director of grant services. “In recognizing our own biases as staff members of the organization, the Equity Ambassadors will evaluate our programs and services with fresh and unfiltered eyes.”

The Equity Ambassadors program will fund a group of four local artists who will employ an intensive, 18-month assessment of the Arts Council’s programs and services as they impact artists of color in the Circle City.

The ambassadors will evaluate all of their grant and fellowship programs and evaluate them in terms of equity, diversity, inclusion, access and sustainability.  They will also evaluate their presenting venues, Gallery 924 and the Indianapolis Artsgarden, their artist services, and their public art programs.

“What their evaluations will reveal is unknown to us at this time, but we’re confident that their recommendations will lead to both short-term and long-term strategies that will increase engagement with artists of color, and likely, artists overall,” said Allen.

In August, the Arts Council announced the open call for local artists to apply for the program. Selections will be made in November. Each Equity Ambassador will receive a $4,500 payment for their work.

“Although we know there are a significant number of artists of color working in our community, this doesn’t always match engagement when it relates to our programs and services,” continued Allen. “So, our task is to figure out why. And who better to tell us why than artists themselves? That’s how the Equity Ambassadors program was born. We hope this process is just the start of many more introductions and relationships as we continue to pursue this work.”

Allen said that the Arts Council looks forward to establishing new relationships with artists through the application process. They hope that this program’s information continues to reach individuals who don’t engage with the Arts Council frequently, or who might not feel represented in its current program offerings.

The Arts Council also has a number of public-facing programs, including its Black History Month celebration, and Art & Soul at the Artsgarden, to showcase its work promoting diversity, equity, and inclusion. Another project, the Murals for Racial Justice, commenced in June.

The Murals project started during last summer’s marches for racial justice across the country and in Indianapolis. The protests demanded an end to the police brutality that led to the deaths of George Floyd, Dreasjon Reed, and Breonna Taylor.  On two nights in late May,  during which there were protests, rioting occurred that damaged dozens of downtown businesses. In response, the Arts Council of Indianapolis, St’ArtUp 317, The Indianapolis Cultural Trail Inc., Pattern Magazine and Mosaic City founder Malinda Simon Jeffers united to spearhead a project that matched businesses committed to displaying messages of racial justice with 22 Black artists.

These artists painted the plywood boards that went up on storefronts to protect them from further rioting.  On their plywood canvases, artists mourned those who lost their lives to police brutality, celebrated Black culture, and painted pro-Black Lives Matter messages.

Among the artists who have worked on the Murals for Racial Justice is Indy resident Rebecca Robinson. She was commissioned to complete her mural during the peak of the protests in downtown Indianapolis.

“When I was contacted, I was asked if I would be interested in creating an art piece that specifically supported the movement,” Robinson said.  “Without hesitation, I agreed. Within a week, I was assigned to a window at Union Station (Meridian Street). I only had a few days to think about my concept and I specifically wanted my artwork to touch on the power of unity, empowerment, and resilience. People all over the country were protesting in each state and even around the world. That was so powerful, and I wanted to honor that.”

She titled the mural “New Nation”, which depicted an image of a figure on one knee while holding a flag with the United States in black.

Seeing opportunity as a Black artist in Indy: The art of Rebecca Robinson

Danicia Monét, who serves as program director for the Arts Council Murals for Racial Justice initiative, said that the murals program continues even though the artwork has been completed and most of the murals are now in storage.  The images on 23 of those murals will be transferred onto vinyl banners. The plan is for these murals to be displayed at the Center for Black Life and Culture at the Indianapolis Central Library. The banners, said Monet, will be available for public use.

“It's available for anyone in the public who has a library account to check out to be an educational tool for a public meeting, a special event a particular topic at at a classroom so that toolkit will live in perpetuity at a local library, so that's very exciting so that message and the imagery is memorialized in archives,” she said.

But equally important for Monét, if not more, is the capacity building and training she is involved in as program director. “There's a series of workshops, interactive workshops and learning sessions that started September 16 and they'll go throughout this year, monthly, and they're free for artists and it's targeted for artists of color,” she said.

Monét was invited into her role in July, soon after the murals went up; when, she said, conversations were “happening very quickly”.

“There needed to be more forethought on what happened next,” she said. “To the credit of the original partners —  the Arts Council, Pattern, and the Cultural trail —  they recognized that this was a skill set and a competency that they didn't have and also just weren't equipped for it so they invited me to come on board to help steer the next phasing of the project as a whole.”

For Monét, it is clear that the conversations being had at the Arts Council need to take place citywide. She mentioned to NUVO an upcoming series of community conversations curated by BlackSpace Indy. “Those conversations will dive into elements of diversity, equity, inclusion and liberation, by way of community practices,” she said.

Lindsey Taylor is a graduate student in the English Department at IUPUI. Managing Editor Dan Grossman contributed to this article.

Redirecting the energy from traumatic circumstances back into love: The art of Boxx

Taking a collective breath together: the art of Nasreen Khan

Hoping for change and introspection: the art of Mechi Shakur

Shakur hopes his work will spark questions, conversation, and action across communities both now and in the future.