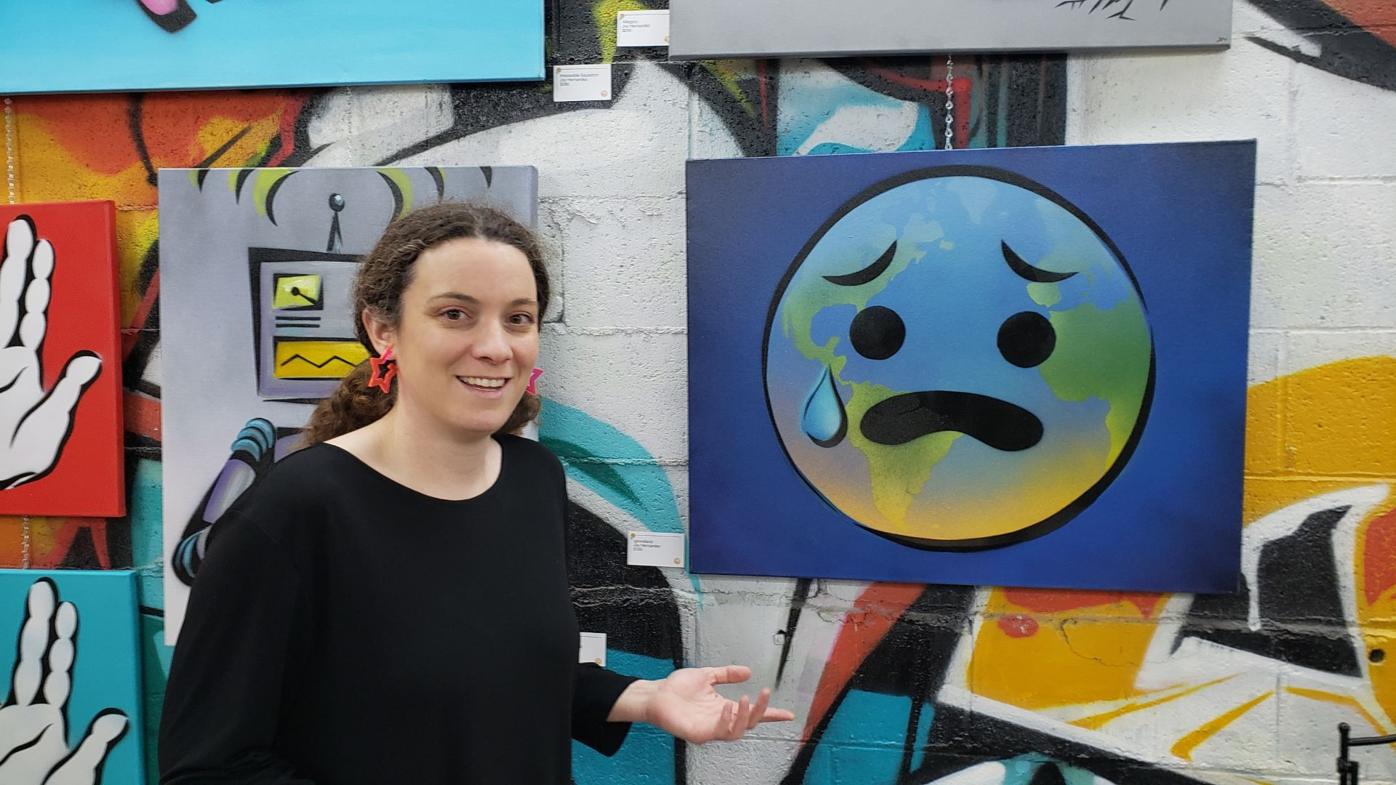 Joy Hernandez at Full Circle Nine Gallery on Feb, 7 2020 with her art 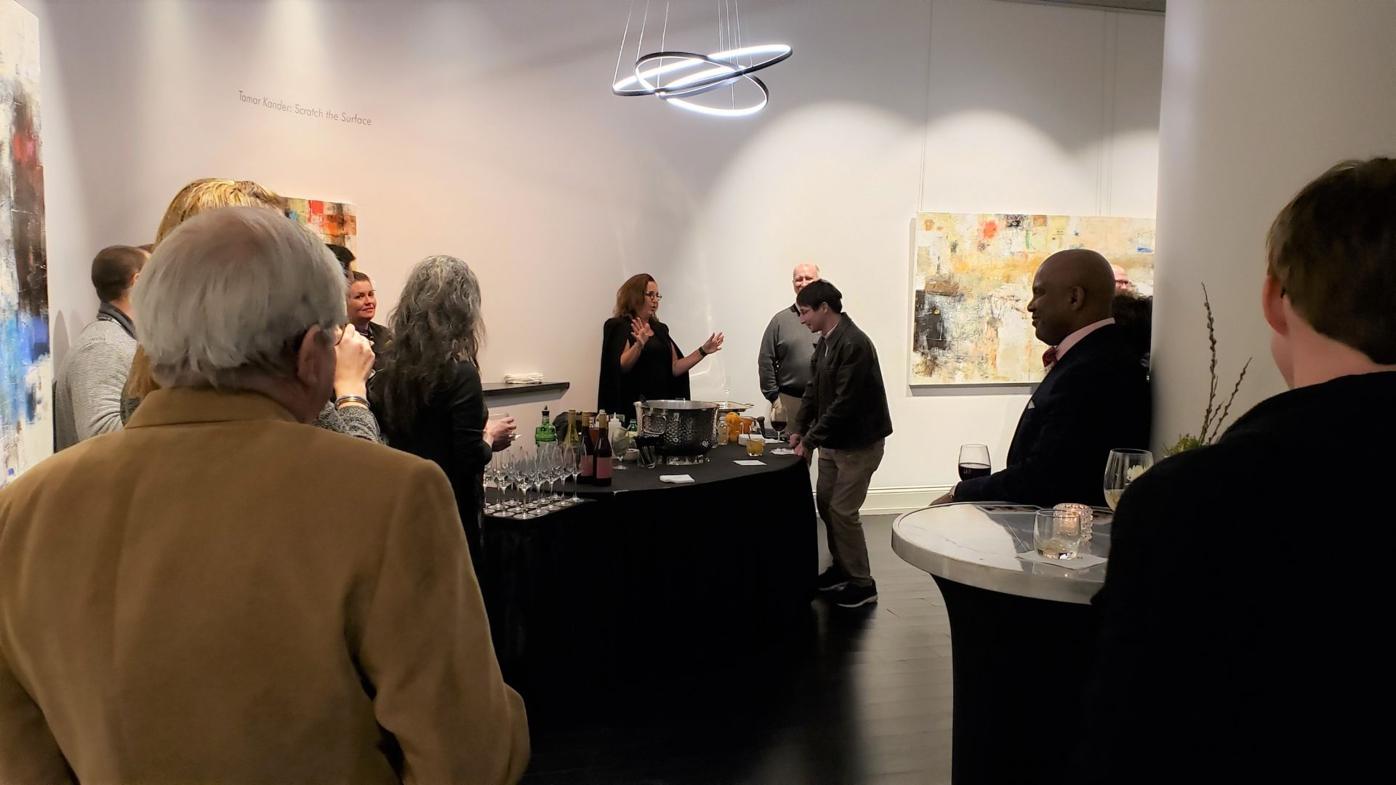 This is the first in a five part series about the artists of Indianapolis and the gallery spaces that serve them and the community. At the conclusion of this series I will revisit the arts scene as it is now, in the wake of the pandemic’s first wave —  and in the middle of nationwide racial injustice protests that have also taken place in Indy —  to explore the way forward.

You’ve probably seen the work of lifestyle reporters who parachute into Indy from The New York Times, Forbes and the like. Their M.O. is to heap praise on the usual destinations. They often include Newfields, the Cultural Trail, and the Alexander Hotel in their listicles. In recent years, various publications have also explored Indy’s innovative arts nonprofits and the kickass culinary scene.

But sometimes they stick the knife in, as in the case with “Your Entire City is an Instagram Playground Now” published in CityLab. In this amusing screed, Kriston Capps called Newfields’ Winterlights “the greatest travesty in the artworld in 2017.”

Outside the scope of such articles is a broad view of the Indy arts scene, a scene that is at once deeply interconnected and economically challenged. So, on February 7, with a broad view of the arts economy in mind, I visited as many art gallery openings in downtown, and nearby cultural districts, as I could stuff into the evening.

Rather than writing my usual art reviews, I wanted to investigate how artists were getting by in the city. I had no idea that COVID-19 would shut everything down the way it did. As artist Joy Hernandez wrote me in a recent Facebook exchange, “Man, doesn’t February seem like three years ago?”

My first stop was the Long-Sharp Gallery. The downtown art gallery, which sits on the ground floor of The Conrad Hotel, specializes in prints by the likes of Andy Warhol and Pablo Picasso. It also showcases the work of internationally known artists and talented locals. (Long-Sharp has also populated the lobby, hallways, and even the rooms of The Conrad with art.)

The Jerusalem-born Tamar Kander, who maintains a studio outside Bloomington, was the featured painter. The title of her show, Scratch the Surface, refers to the thickly applied paints and deep textures on her primarily non-representational canvases. I was more interested, that evening, in scratching the surface of the gallery’s business model. Knowing that owner Rhonda Long-Sharp has a sister “project space” in New York City, I asked her about the slice the Indy gallery occupies within the total pie of her business, as it were.

As we talked, during the moment that we had to talk, I also asked about her profit margins. She told me that the revenue from the gallery in proportion to her total sales, including art fair sales, is “in the single digits.” She made it clear that she maintains the gallery out of a sense of mission. She uses the high-end commercial space to promote the works of talented Indiana artists alongside her more blue-chip art offerings.

More than thirty years ago, Long-Sharp bought her first work of local art in Indianapolis. It was from the Mark Ruschman Fine Art Gallery, the most prominent gallery in the city featuring local artists.

“It was a painting by Mary Lou Dooley Waller,” she recalled. “It’s still one of my very favorite paintings.”

This experience taught her that you do not have to live in a New York loft, or die in Paris, to be a world class artist.

Logansport-based painter Jason Myers – who fills his canvases with abstracted humanoid forms – is one such artist, according to Long-Sharp. “We've assisted him with two solo museum shows,” she said. “He's also had a solo show at the Art Museum of Greater Lafayette, in Indiana. He’s had a solo show at the Polk down in Florida, and he's about to have one at the University of North Carolina.”

Long-Sharp, who represented death row inmates as a defense attorney for two decades before representing artists like Myers as a gallery owner, used to think that great art “floated to the top” when she was a novice collector. “I didn't understand that it was the responsibility of galleries to bring the great art to the top,” she told me. “I realized that if not for Mark Ruschman, I wouldn't have had all the joy that the painting brought me over the years because I would’ve never seen it.”

When the Ruschman Gallery closed in 2009, it was considered a loss by Indy’s arts community. But the closure allowed Mark Ruschman to become involved in many different art initiatives. He also became the chief fine arts curator for the Indiana State Museum. In this capacity, he curated the stunning “200 years of Indiana Art” exhibition in 2016.

Mark Ruschman wrote the introduction to the booklet for Tamar Kander’s Scratch the Surface, and he was present at the opening.

From the Wabash to the Droops

The colorful canvas depicts dental history from the beginning of time to the era of IU School of Dentistry Dean Lawrence Goldblatt.