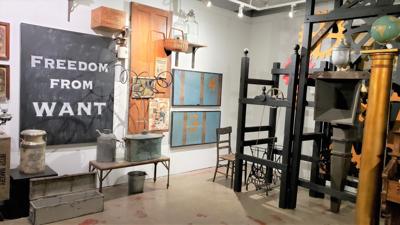 This is the fifth part in a seven part series about the artists of Indianapolis and the gallery spaces that serve them and the community. At the conclusion of this series I will revisit the arts scene as it is now, in the wake of the pandemic’s first wave —  and in the middle of nationwide racial injustice protests that have also taken place in Indy —  to explore the way forward.

Tube Factory artspace, located in the Garfield Park neighborhood, is often my terminal stop on First Fridays in Indianapolis.

The hybrid contemporary art museum and community center opened in 2015 in a refurbished, century-old manufacturing building. (One of its incarnations was as a former tube factory.)

On Feb. 7, the space was packed with patrons. Also in the crowd was Big Car Collaborative’s executive director Jim Walker who invited me to stop by, some morning soon, and check out the Tube’s new coffee bar. In addition to the two opening art exhibitions, vendors were on hand for the First Friday Night Market.

The exhibition in the main gallery featured the work of Kipp Normand, a Harrison Center studio artist, and local historian. His exhibition Snake Oil, A Fantastical American History featured a large assemblage consisting of antiques, constructed parts, and moving gears.

This from the wall text:

Normand’s work didn’t quite distill four centuries of history for me, but I found it playful and engaging nonetheless. It made me think of both Charlie Chaplin’s film Modern Times and my Rube Goldberg project from high school. It also made me consider my own writing. That is, in my more frustrating moments as a journalist, I think of writing more as an assemblage than a flow. I find myself moving paragraphs back and forth, constantly adjusting, until everything fits.

Big Car Collaborative is the nonprofit arts organization that runs Tube Factory artspace and uses the site as their headquarters. But it seems silly to try to ground Big Car at any particular address because so many of their initiatives don't fit within the walls of any of their facilities.

Take Big Car's relationship with the late Mari Evans — one of the founders of the Black Arts movement and longtime resident of Indianapolis — as an example.

If you've been around Mass Ave at any point within the past four years, you've seen the 30 ft. tall mural of Evans painted by Michael "Alkemi" Jordan and facilitated by Big Car. The mural of the renowned poet and writer, one of the founders of the Black Arts movement, stands within sight of a mural of another iconic literary figure, Kurt Vonnegut.

The painting project was facilitated by Big Car in 2016, in close consultation with Evans, who died in 2017, and funded by a grant from their Indiana Arts Commission. The mural site was chosen in part because of its proximity to the Vonnegut mural, according to Shauta Marsh, Big Car's curator and co-founder.

Marsh had first encountered her work in 2004, and began reading her essays. After her husband Jim Walker had a chance encounter with Evans, the idea for the mural began to take root as they contemplated projects they could do in collaboration with her. An exhibition on Mari Evans' life and work by Carl Pope was one result of this collaboration. The mural was another.

Big Car has never just been about art for art’s sake. As with the Mari Evans mural, the organization has been always been mindful of the social impact of the work that they do.

There have, however, been a lot of adjustments along the way in the history of the nonprofit arts organization. Conceived in 2004, the nonprofit has expanded both its mission and its footprint and has received many grants along the way to implement its strategies. Their brand of social practice art has always emphasized collaboration and engagement in the community. But in the past five years, it seems that they’ve gone into overdrive, with initiatives in community radio and artist housing.

In December 2018, Big Car received a $3 million Eli Lilly Endowment grant for its Cruft Street Commons project. Among its objectives, this initiative will transform a 40,000 square foot former factory adjacent to Tube Factory artspace into a community center with artists studios and space for public programming.

Big Car Benefits from past experience. The organization’s first gallery/studio space was at Murphy Art Center in Fountain Square. They inhabited the space from 2005 to 2011. Other arts organizations followed Big Car into the Murphy. So did restaurants and bars, banking on Fountain Square’s reputation as a hipster neighborhood. Eventually, a new apartment building went up across the street from the Murphy.

Such development raises concerns that, as property values rise, lower-income residents will be displaced from the neighborhood by rising rents, like Big Car itself was displaced from the Murphy Building.  One doesn't have to be a scholar to have seen gentrification at work in Fountain Square over the last decade, but a recent scholarly report suggests that this process is, in fact, taking place. A recent study by SAVI, a program of the Polis Center at IUPUI, showed that income levels in Fountain Square have risen 47 percent from 2010 - 2016.

In any case, Big Car does not want to repeat its Fountain Square experience with its creative placemaking projects in Garfield Park.

What is creative placemaking?

Big Car Executive Director Jim Walker defines the term creative placemaking by what it isn’t as much as what it is. To Walker, placemaking is not “place decorating” or directed from above “designer-as-god stuff” where locals have zero input.

This is part of the definition that he gave me about a year ago when I was writing an article on the subject:

What is placemaking? Placemaking is about making places inviting, comfortable, and fun for people. We utilize creative strategies to make places feel more like home. Placemaking is site and community specific work. It is grassroots work that requires community engagement and collaboration. True placemaking is, at its core, about creating and setting in motion the kind of open and free public social infrastructure we need to be better connected with each other. Studies show that connected people are less lonely, healthier, safer, happier, and more successful. And a community of connected people is more trusting, empathetic, inclusive, sustainable, resilient, and civically involved. These are the primary goals of placemaking for us.

Artists purchase, and then live, in these affordable houses and agree to dedicate some of their time to improving the surrounding neighborhood. There are also artists renting housing through the program.

The APLR program works by allowing qualifying artists to purchase a 49 percent ownership interest in their home. The houses, which cost the artists in the realm of $50,000 or less, can only be sold back to the APLR partnership. They will then turn around and resell the house to another artist at the same cost level. In theory, everybody wins. Artists get affordable housing, the community is improved, and the APLR houses remain outside gentrification-inducing market forces.

“Currently, we have three of the five homes sold to artists,” Shauta Marsh, co-founder and director of programs, emailed me on May 29.  “All three have moved in. The two remaining homes, we have artists selected but they are still working on getting financing. There are six rentals in the program. We have artists living in two of the rentals; those artists have also moved in. The other four are still under renovation. Three of the rentals that are under renovation are due for completion and ready for renters on July 1. They will be on the television show Good Bones.”

While I think that the jury’s still out on the overall effectiveness of this program, I'm impressed by its innovation and its ambition, two qualities that have been with Big Car from the get-go.

First and last Fridays: The conclusion to 'A pre-COVID artwalk in Indianapolis'

A visit to the Murphy Art Center and a return to the Harrison Center at the price of a pint of blood.