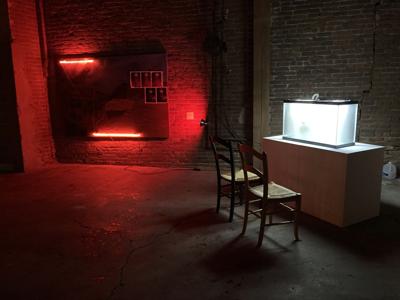 It was cold, wet—luminescent on the streets. I walked to Hoy Polloy Gallery on tenth street, thinking about Dan Wakefield’s eyes, teaching, responsibilities gained and lost, construction in Indianapolis, all of which culminating in the feeling of an oddly specific, end-of-the-week exhaustion—where the evening covers you in a fog of bewilderment, excitement, and complete dismay at the unpredictable nature of what you see, think, act, become.

When I arrived at Hoy Polloy (3125 E. 10th St. Suite L), a band from Milwaukee, Rat Bath, was playing in the small room that faces tenth street, where a group watched the lead singer decked in a Santa Claus outfit strum their guitar and yell out profanations. This was the first band in the Abattoir Midwest’s "Babehouse Indy Holiday Gala," which was a “celebration dedicated towards BIPOC and LGBTQIA artists in the Indy and the Midwest” area (via Abattoir Midwest’s Instagram). In the back gallery, there were works from Gnat Bowden, who would later play a Kleaner set; Justin Brown, the proprietor of Hoy Polloy, whose collage work of Indianapolis buildings, and the notable depiction of Democrats kneeling with Ghana’s Kente scarves around their necks, continue to magnify specific, systemic problems around race; Duncan Kissinger, with his collection of the PAW patrol paintings; Ozzy Graham, with a painting of odd, almost Iconography-like scenes in symbolic, disparate places against a minimal backdrop; Nick May, with portraits of Astro in apartment settings; and Allison Scout Waite, whose portrait of a nude woman smoking in shades of purple and green, evokes “the tenuous state of existence for femme people—simultaneously expected of and denied in the same breath. Through these paintings, I attempt to visually articulate this complex experience and ways I understand power and reclamation of self under these circumstances.”

The show brought together numerous artists, musicians, and DJs (5laphouse and DJ Applejuice would later play, along with others) and created an open space for exploration, expression, celebration—a hopeful opening in a city whose conditions could be described as deleterious, confrontational.

On Mass Ave. at The Jungclaus Mill (825 Massachusetts Ave.), StorageSpace Art Gallery and COMPANION put together a two-day show entitled, “Stove Party,” with various Indiana artists showcasing their fabricated stoves and fire pits with additional video and neon installations inside. Against the drizzly cold weather, the screens of fire burning, the smell of wood, and the stoves themselves created an evocative space of contemplation and pragmatic warmth. All of the artists who participated in the exhibit received a two hundred dollar honorarium. The mental fog began to recede as I stared at this neon piece, Rolling Stone: Musicians on Musicians, by Tillman Reyes and Bryn Jackson’s Archipelagic Seed and thought about my childhood in Fillmore, Indiana; an acid trip in Las Vegas; and the claustrophobic feeling of wearing a mask in a grocery store. An ambient DJ played music in the corner, pushing me further into self-introspection until I started talking to a mailman still in his uniform drinking a beer. He had recently moved back to Indianapolis from Massachusetts. He dreamed of moving to Pensacola, sitting on the beach, hanging out near the military base, and delivering mail. I often wonder if there is a spirituality in looking at art. The mailman professed bewilderment when it comes to art, even when I told him, “All you do is look and feel. That’s it.” No need to posture. You can only be yourself. All you can do is absorb, respond, and hope to delve closer to a refined honesty, opening wide a space you thought was no longer there.