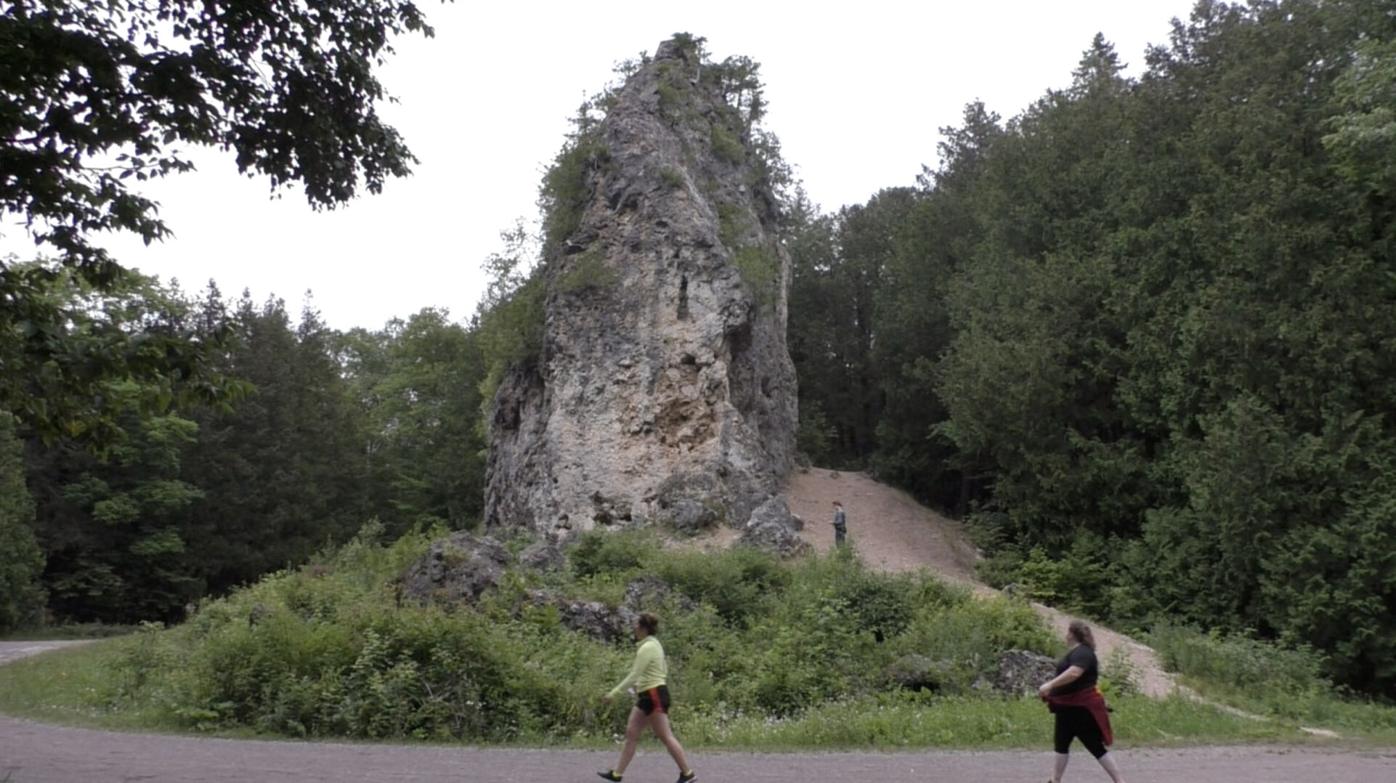 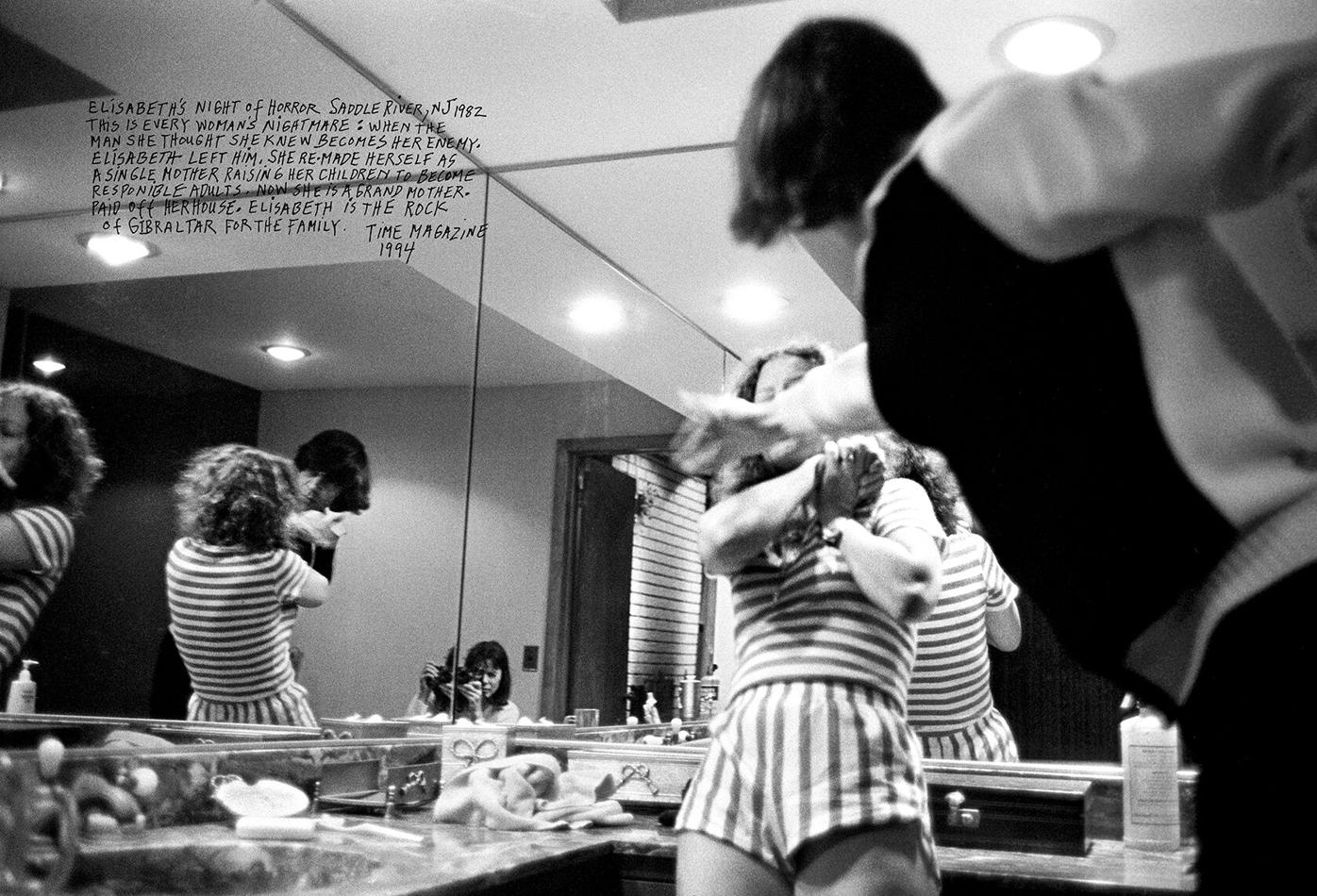 After Fanny was asleep one night, I heard Elisabeth screaming. I grabbed my camera and ran down the hall. They were in the bathroom, and I arrived as his hand lifted to hit her. My reflex was to take a frame and then stop him. He threw me down. Saddle River, New Jersey, 1982 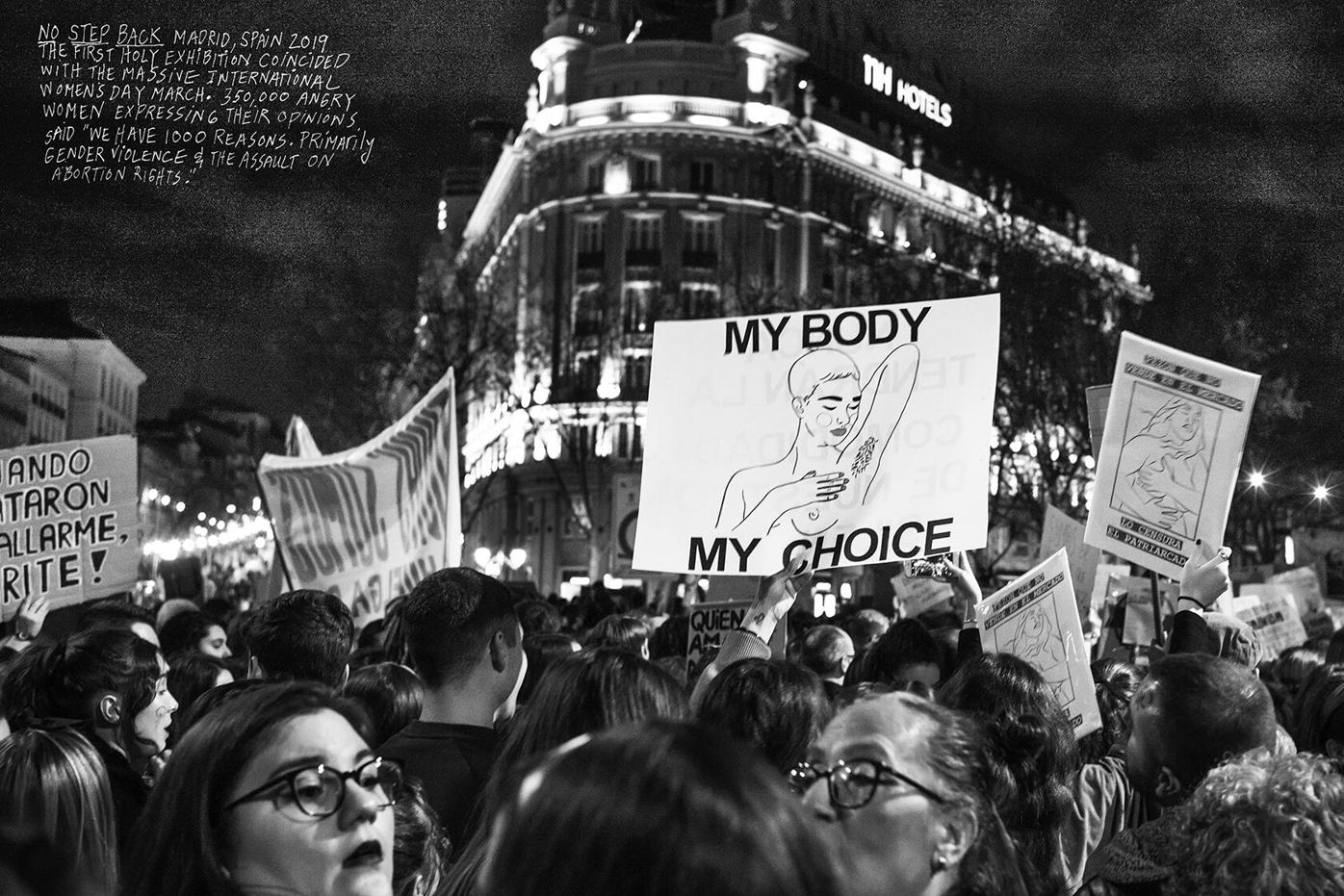 "International Women’s Day, Madrid, Spain, 2019." From the inscription with the image: No Step Back. The first Holy exhibition coincided with the massive international Women's Day March. 350,000 angry women expressing their opinions said "We have 1,000 reasons. Primarily gender violence & assault on abortion rights." 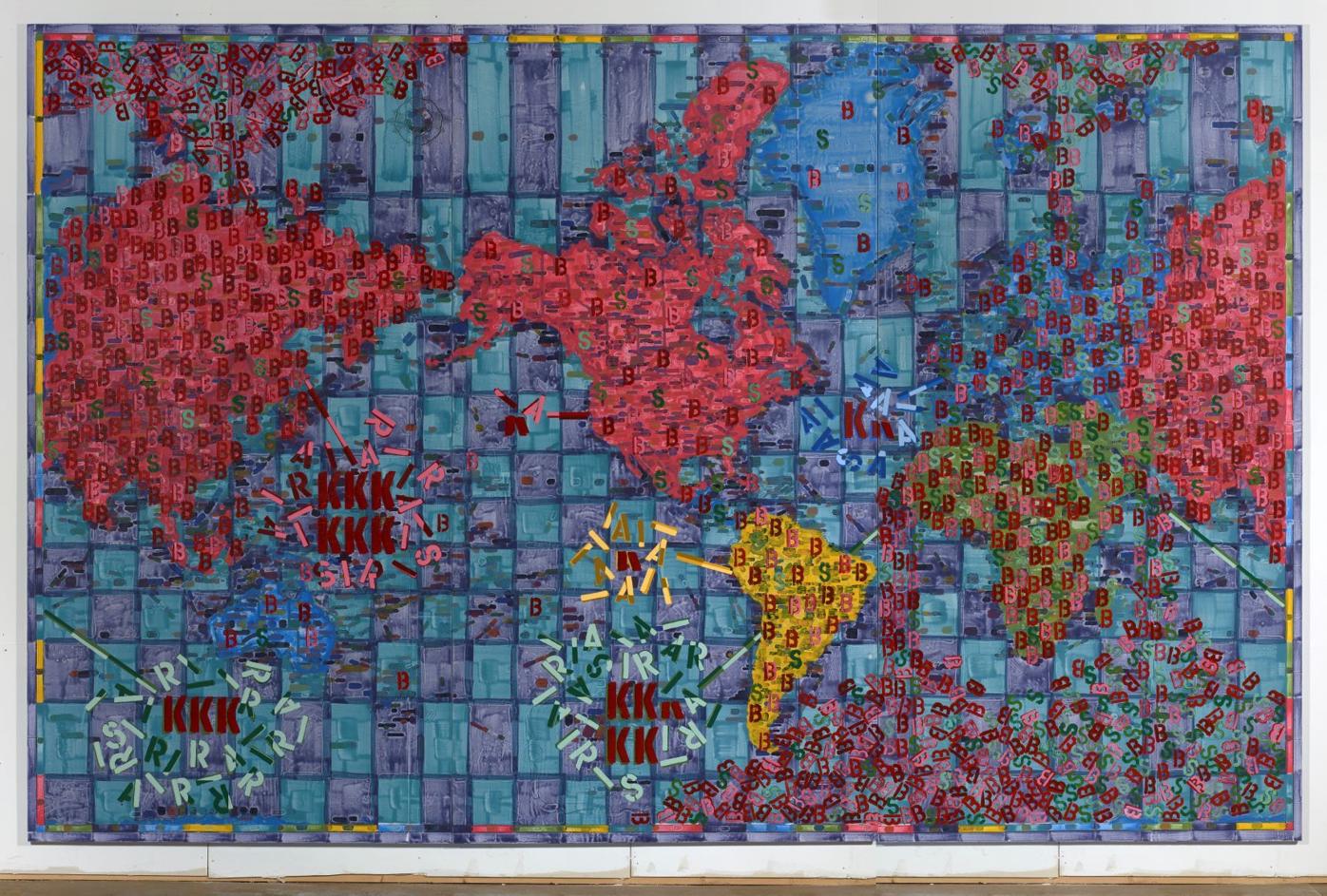 "Current Wars & Conflicts… (with, by continent, Belligerent and Supporter groups marked with letters, and Asylum Seekers, Internally Displaced, Refugees, Stateless, and Killed marked with a letter for every million), "2019 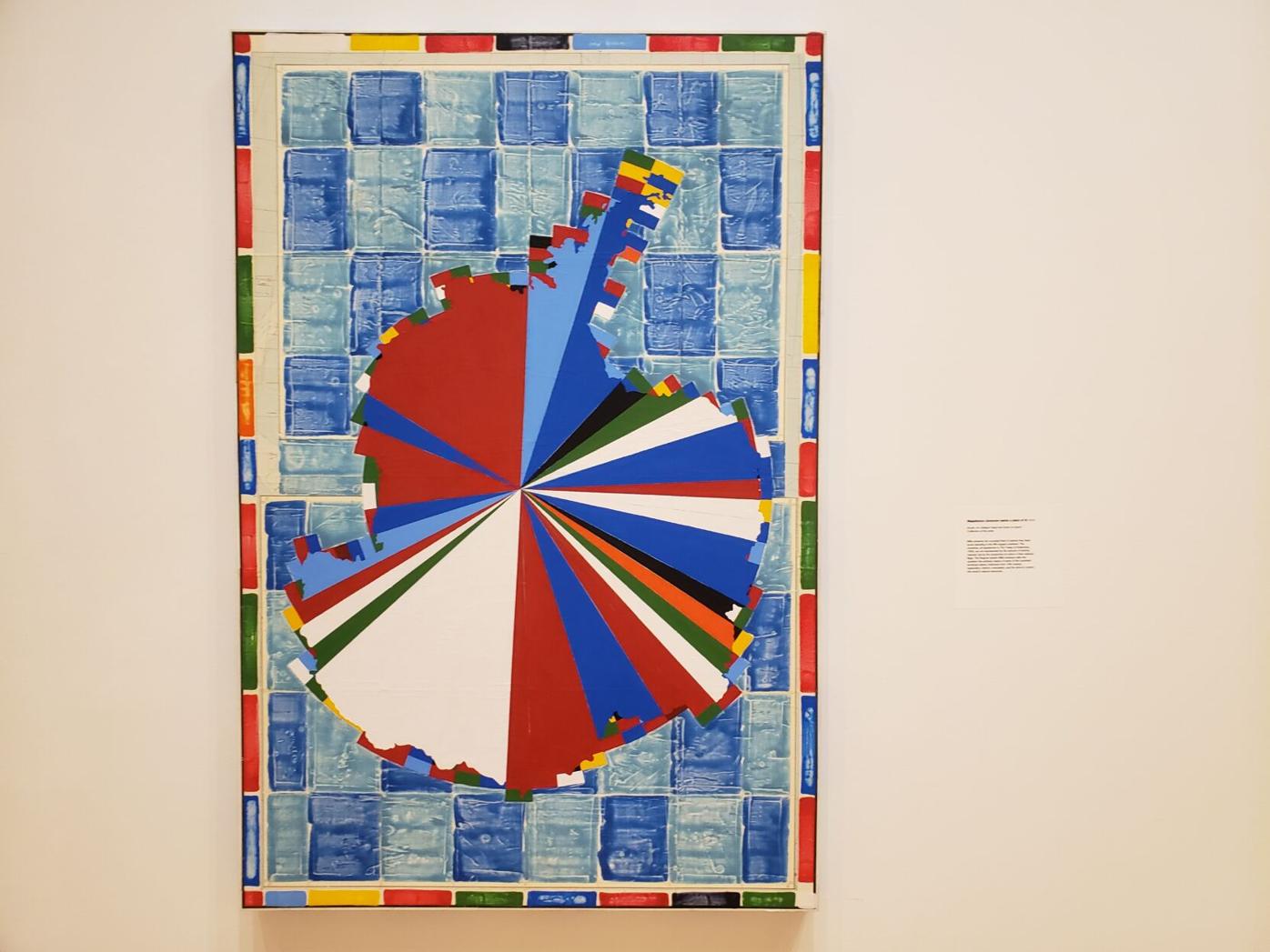 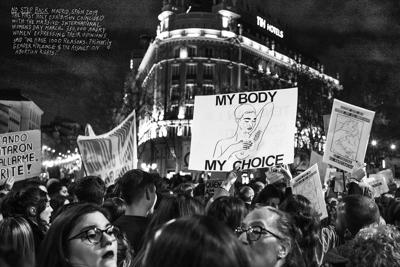 You might think that the three exhibits up now at Herron School of Art & Design, which address an array of social and political issues, are especially timely. But they’re not a knee jerk reaction to this summer’s Black Lives Matter protests, according to Joseph Mella, director of the Herron Galleries. “We’ve been working on these exhibits for over a year,” he said.

The COVID-19 pandemic didn’t prevent Mella from organizing a reception for the three artists —  Dan Mills, Donna Ferrato, and Jana Harper —  although it would have to be virtual. The Sept. 10 virtual reception, a first for Herron, had the effect of concentrating the Zoom patrons’ attention on the socially-conscious exhibits without the distraction of the wine and cheese that is customary at such events.

The first of the artists Mella introduced, Dan Mills, used maps to question the status quo in “Human Topographies.”

One of the standout works, titled “Current Wars and Conflicts …” is painted on a world map.

World maps have always been an imperfect means of conveying information as they portray the planet’s curvature on a flat surface. Distortion is inevitable. Consequently, countries at the northernmost latitudes look like they are pumped up on steroids while those closer to the equator look deflated.

But for Mills, who often obtains his maps from discarded university library collections, such distorted representations are the perfect vehicles, as it were, to mount his artistic explorations.  This is true for  “Current wars and conflicts …”

“This one really started with just this feeling that there's just so much war and conflict in the world,” he said. “My next thought was well how much? I realized I didn't even know. And if I don't —  if this is something that is on my mind and yet I have no idea —  maybe I should know. So it started by researching that and figuring out how many there are and coming up with a definition.”

Mills discovered there are 52 ongoing military conflicts in the world. So he came up with a system to catalog those conflicts on the map. Thus, the work’s full title is  “Current Wars and Conflicts (with, by continent, Belligerent and Supporter groups marked with letters, and Asylum Seekers, Internally Displaced, Refugees, Stateless, and Killed marked with a letter for every million)”.

Another of Mills’ paintings, “Contest (with nationalist colors),” focuses on the shifting, and disappearing, boundaries of Poland over time.

“It actually disappeared from the map for 123 years, and then came back,” he said. “There obviously was something between language and culture that was so pronounced that it didn't just get absorbed and disappear.”

Mills painted other works not just on a single map, but a collage of maps. “Magellanica” which focuses on the continent of Antarctica —  of which many countries have claimed a piece —  is such a work.

“We may discover that they're more contested when the natural resources that exist within it become more accessible due to climate change,” said Mills. “That's kind of a double tragedy, right? So, if you were to unpack this thing if you're looking at it: Each one of those pie shapes represents a primary or a secondary country which has a claim on it. And each color is a nationalist color of each country. So, if you were to start at the top, it's in alphabetical order. So if you're to start at the top the light blue is Argentina. And that's the predominant. That's the color that there is the highest percentage of on their flag. So that's how I determine the nationalist colors.”

The finished work bears some resemblance to a pie with many differently-colored slices and/or to a color field painting.

“I've worked with maps for so long, and started out of a love and fascination with how it's such an abstraction,” Mills said. “Yet there are many people who, while they may not think they like abstract art, accept the abstraction of maps and the incredible intelligence of how they can communicate so much, but they always get some stuff wrong.  On top of that, as the years went on, I became more and more interested in the bias of maps and their subjectivity.”

On the other hand, there is nothing abstract about the photograph, “Elisabeth and Bengt Holmgren. Saddle River, NJ, 1982”. This is the work that made Donna Ferrato’s reputation. In this work you don’t just witness a man slapping a woman across her face but Ferrato herself. She was unable to avoid capturing herself in the image, as all three were in a bathroom with multiple mirrors.

The photograph serves as the focal point for her exhibition.

“It was unexpected,” Ferrato said on Zoom, during the virtual reception, about the experience of taking this photograph that Time magazine has identified as one of “The Most Influential Images of All Time.”

“The more I stayed around them, the more I started to get very shocked at the things that I was seeing, especially the kids, and this man Bengt was a real dark, sinister character; he became that way because of the cocaine,” she said.

One night she heard screaming from downstairs, and after taking her baby and putting her in a basket and hiding her in the closet, because she knew that Bengt had a gun, she went downstairs.

“But I had my camera,” she said. “So I felt pretty good. I could go down there and see what was happening. As I walked into the bathroom where she knelt down and took the photograph.

“One side of my brain said, if I take this picture, maybe he'll stop hurting her,” Ferrato said. “The other part was saying, and that's the real photographer in me, is that I can't believe he's doing this. If I don't take a picture of this, no one will ever believe it because they thought he was such an admirable guy. People really thought he was very admirable. Nobody would have believed it. Nobody ever believes it when men beat women. So I got that picture. The second time when he went to hit her. I threw this arm and I asked him what he was doing and I said you're gonna hurt her and That's when he threw me off. And he said, ‘She's my wife and I'm going to teach her a lesson that she cannot disobey me’”.

But other such captured moments may serve less as exposé and more as inspiration. This seems particularly the case with a photograph of a topless protester, Leah. The setting was the Women’s March on Washington D.C., on Jan. 21, 2017, the day after Donald Trump’s inauguration.  She is photographed with taped over nipples and the words “Still not asking for it” painted on her chest.

“I was on assignment from Maclean's magazine,” Ferrato said. “I didn't even think I would go to this march because I was so depressed.”

But the presence of Leah and the 500,000 other women at the march seemed to inspire her.

While Ferrato looks to the future optimistically in such photographs, Jana Harper’s exhibition Moving with the Land, Listening to the Ancestors, is focused on reclaiming the past.

“My mom's dad was Native American, grew up in Michigan, but like many natives in that generation, they grew up not knowing that they were Indian,” she said. “And that was really a protective measure, because at that time a lot of children were being taken away from their families, and put into boarding schools.”

Moving with the Land focuses explicitly on the Mackinac Band of Chippewa and Ottawa Indians’ 20-year petition for federal recognition. The exhibition consists of photographs —  of sacred sites on Mackinac Island —  archival material, and mixed media works containing the names of Mackinac Band members.

As part of the work in the exhibition, Harper wrote out all the 430 surnames that were taken in 1870 and again in 1908 as part of an Indian census. “My mom's family shows up on this list of about five about five different surnames that are linked to her lineage,” she said.

For Harper, writing the names felt not only like a way to familiarize herself with the other families that lived on the island during that time, but to follow her artistic muse. And in that, she felt a kinship with the other artists exhibited with her at Herron.

“I like how Donna was describing walking into that room and not anticipating getting this photograph,” said Harper. “I think sometimes when we make things you have an impulse that you follow and you're not quite sure where it's going to lead but the writing out of these names, actually led to the whole rest of the exhibition.”

On the other hand, Joseph Mella’s impulse —  as curator of the exhibition —  was to find artists to exhibit who complemented one another on multiple levels. “When I was interviewing for this job over well over a year ago, there was a real interest in in presenting a broad range of art but also art that had some kind of agency to it, and art that was engaging, and told untold stories about our human condition be it political, social, spiritual,” he said.

The exhibitions will be on display through Oct. 17. Planning a visit? Click here for information.