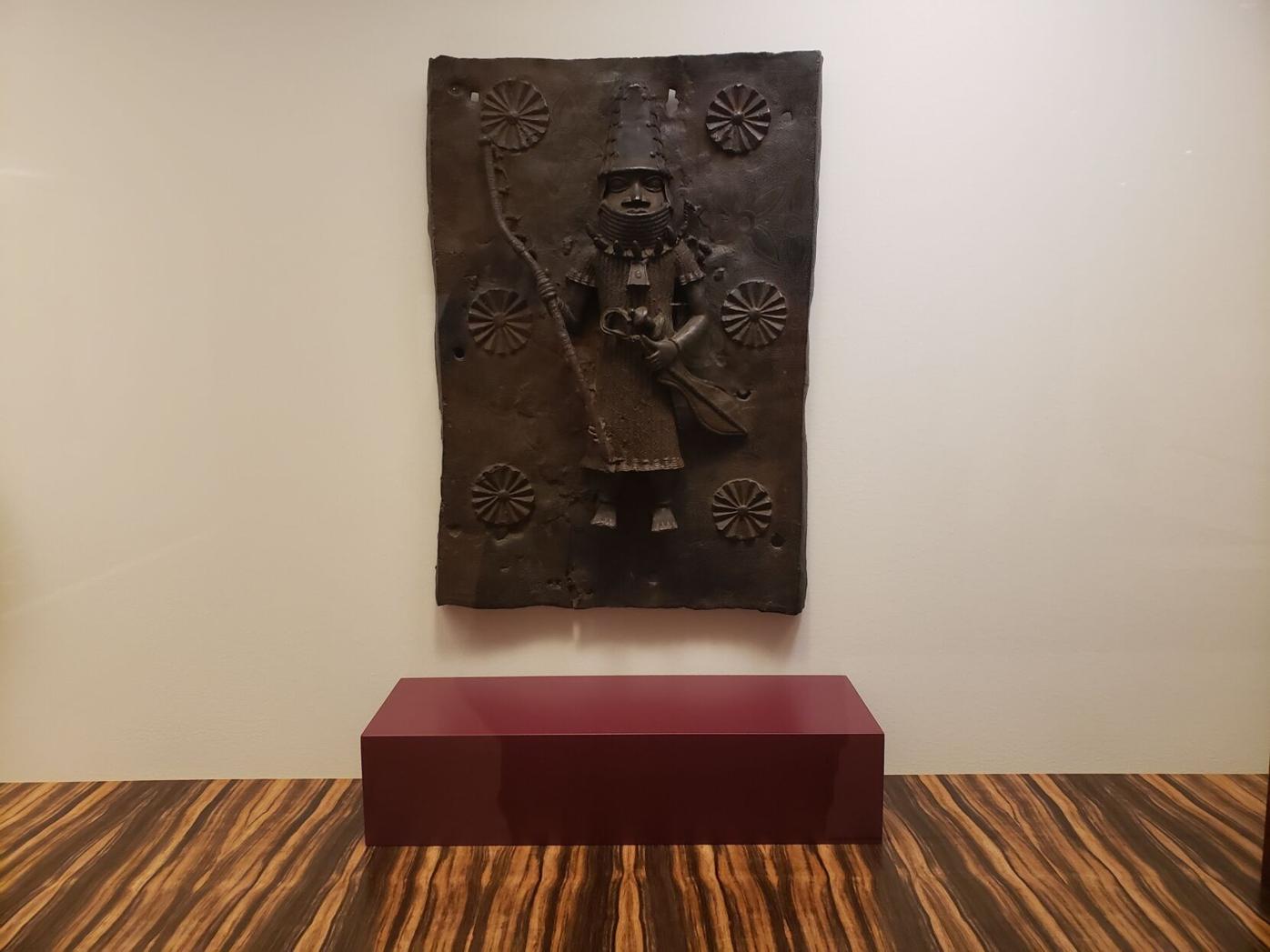 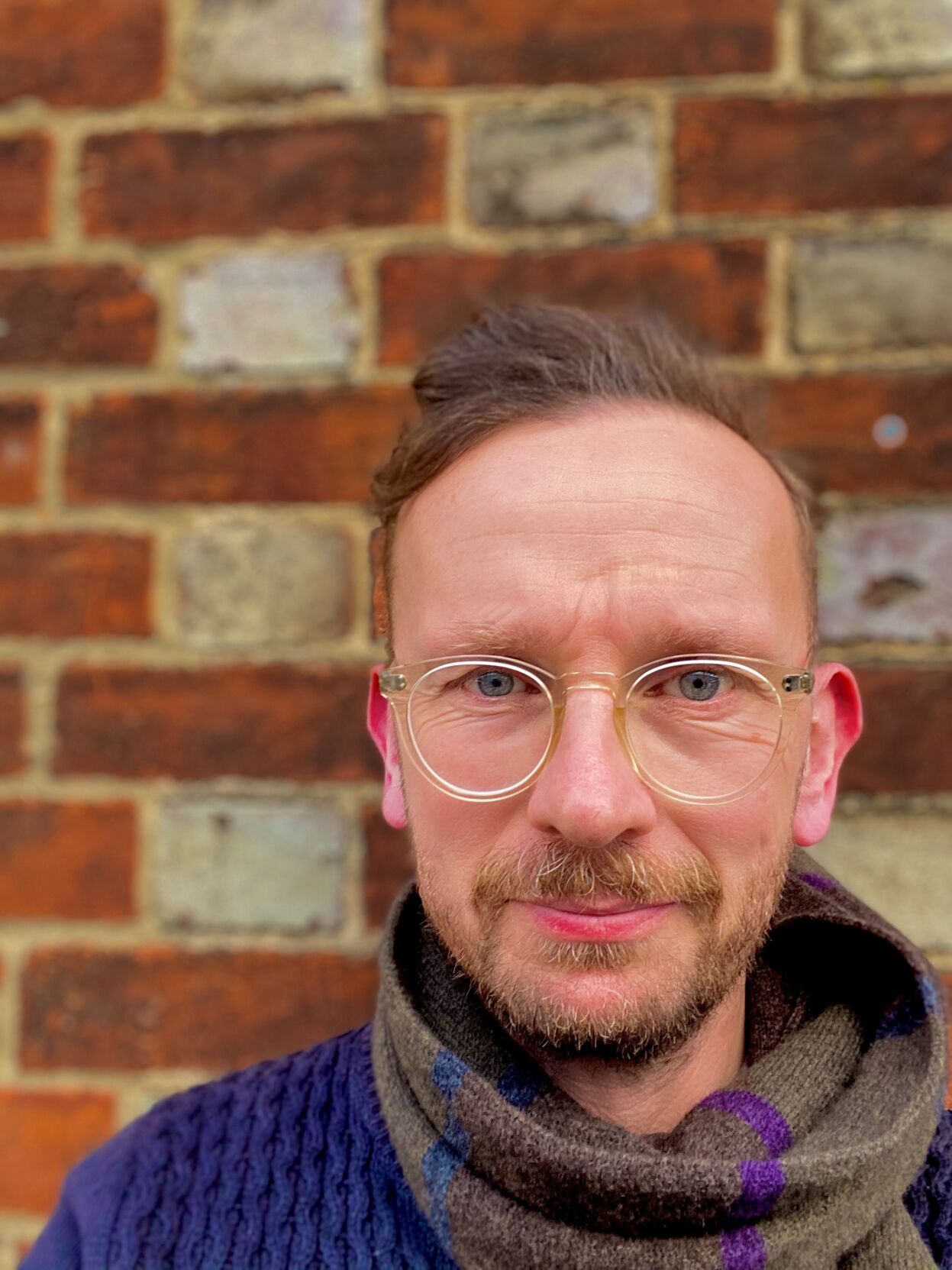 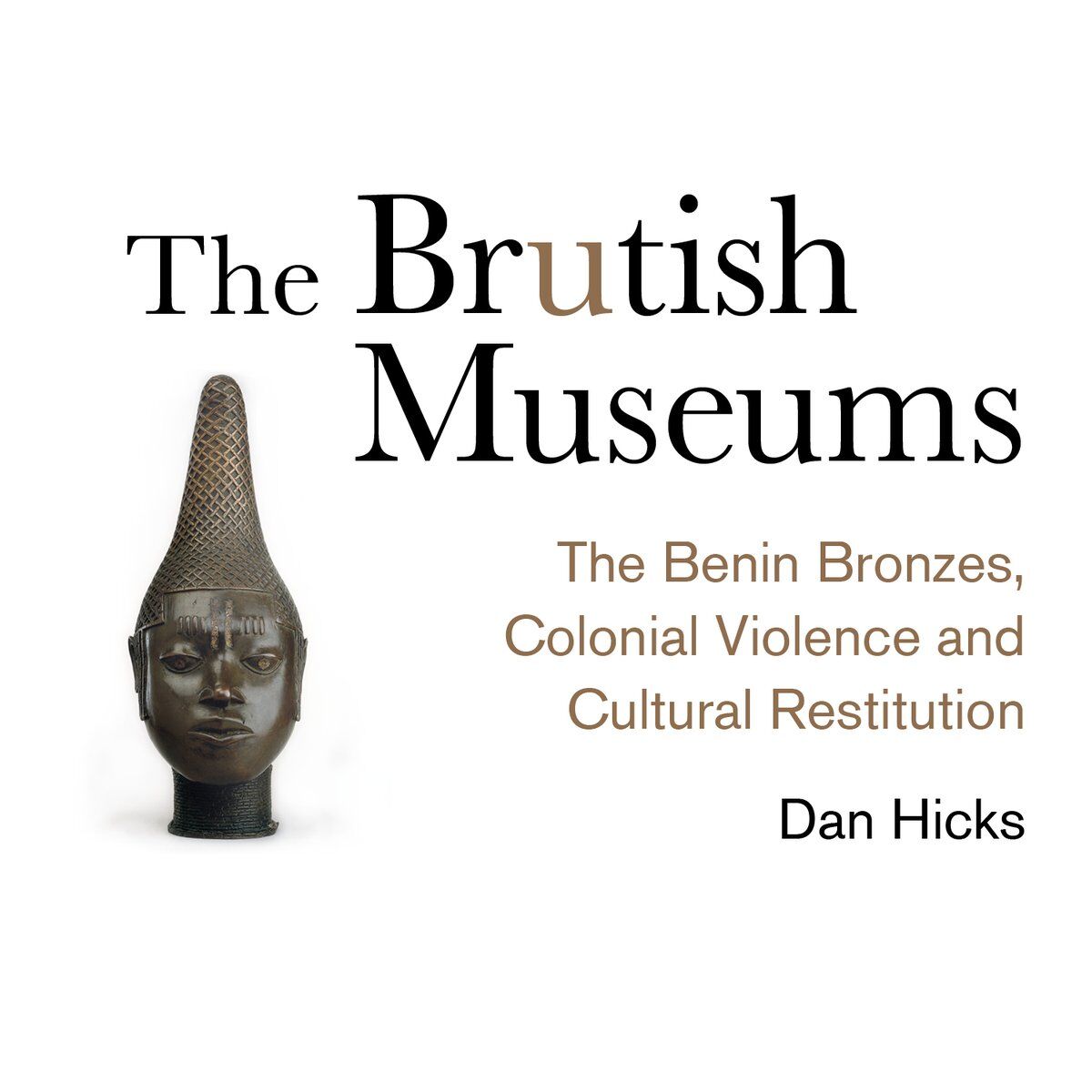 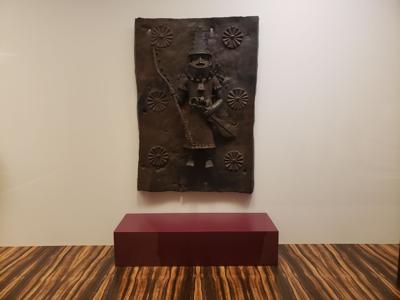 Editor's note: On December 8, the IUPUI Arts and Humanities Institute (IAHI) hosted an Arts+Ethics webinar with author Dan Hicks. In my capacity as an IAHI research assistant, I wrote a preview article — on which this article is based — as a preview for this event. It first appeared in the IAHI blog on Nov. 6.

In the African galleries at the Indianapolis Museum of Art at Newfields, you’ll find a brass plaque depicting a warrior, dating from between the 16th and the 18th centuries. But the gallery label doesn’t detail how the British military extracted this item from the Kingdom of Benin in Nigeria.

For British author Dan Hicks, the Benin bronzes represent the history of European colonial conquest. The bronzes, which number in the hundreds, are a collection of plaques depicting the Royal Court of the Obas of Benin City, Nigeria. Plundered by the British during a naval raid in 1897, they eventually made their way into numerous museums and private collections in Europe and the United States.

The plaque at Newfields had several owners before it was sold in 1977 to Harrison Eiteljorg — the namesake of the Eiteljorg Museum —  who donated it to the IMA in 1989. It is one of 868 plaques to show up in appendix 1 of Hicks’ book, “A provisional list of the worldwide locations of Benin plaques looted in 1897.”

Dan Hicks makes the case in his book The Brutish Museums: The Benin Bronzes, Colonial Violence, and Cultural Restitution, published by Pluto Books, that these objects should be repatriated. But Hicks also seeks to re-center and repurpose the art museums that harbor stolen artifacts and thus remain complicit in the colonial enterprise; as long as these spaces are receptacles for objects of colonial conquest, he argues in his book, they cannot be what they should be in the 21st century: “celebrations of African creativity that radically lift up African art alongside European sculpture and painting as a universal heritage.”

During a webinar on Dec. 3, hosted by the German Historical Institute in Paris, Hicks, professor of Contemporary Archaeology at the University of Oxford, drew a connection between museums currently displaying plundered works and acts of colonial violence that occurred more than a century ago. His book, lauded by The New York Times as one of the 10 best art books of 2020, is not just an in-depth look at histories of violence, but also a blueprint for how “we can move from just dialogue into action over the question of stolen objects in the context of Africa,” he said.

The Pitt Rivers Museum, where Hicks has been a curator for 13 years —  which currently holds 10 Benin bronzes —  makes a good starting point for discussion, he said. That is because the museum’s anthropological and archaeological collections resemble those that existed at the beginning of the 20th century.

“Many of the modes of how objects are displayed have continued,” Hicks said. “The cases are still there, but also, maybe, the Pitt Rivers reminds us of things that are also present in other museums, where the persistence of older ways of looking at world culture are harder to see.”

Hicks also gave a brief, revealing introduction to the man who founded the museum’s collection, Augustus Henry Lane Fox Pitt Rivers. Pitt Rivers was an ethnologist and archaeologist and an officer in the British army with expertise in munitions.

While the 1897 British raid is a centerpiece of the book, Hicks said that this attack didn’t exist in isolation: It was one of many. He asserted that much of the history of such battles  —  unlike the battles of WWI and WWII —  remains understudied. The challenge for 21st-century museum curators, he said, is to correct what he views as a gap in the historical record.

He noted that the word expedition in English makes it sound like what the British were involved in were akin to Boy Scout outings. “Of course, these are major military attacks in which thousands were killed.” And, he adds, many items were looted during said expeditions, by the English entrepreneurs/adventurers.

“The looting, I had not realized until writing this book, was not, as I had always been told, some official act where the governments or the nation-states or the crown officers for the colonies carefully took these objects and sold them off in order to pay for the expedition,” he said.

In fact, as he documents in his book, what transpired was killing on an industrial scale aided by the latest weaponry —  such as the Maxim machine gun invented in 1884 —  and war profiteering. An awareness of this history was, in part, why the organizers of the Rhodes Must Fall movement targeted the Pitt Rivers Museum for criticism.

Rhodes Must Fall originated at the University of Capetown, South Africa, to remove a statue of the founder of Rhodesia, Cecil Rhodes, that stood on campus. It was removed in 2015. The protest movement that called The Pitt Rivers has expanded their reach to Oxford, and even to Harvard in the U.S.

“The military violence and the collecting of objects and the theory of cultural superiority are really bound up together here at the Pitt Rivers museum,” Hicks said. “So it's in that context that five years ago, the Rhodes Must Fall campaign made the observation over social media that the Pitt Rivers museum is one of the most violent spaces in Oxford, and that tweet, to some degree, is the start of the book,” he said.

He then shared a photograph on Zoom for his audience that he described as rare: a photograph of English soldiers burning a sacred African site.

“New technologies, which were visual technologies ... suddenly made visible anti-Black violence that had been happening for centuries in America,” Hicks said. “Something similar is, actually, happening in our museums now, I want to argue.”

It was thinking about violence in the museum not as something that happened in the past but something that residues continually into the present, he said, that makes him push towards restitution. And the time for restitution of African objects —  including the 150 or so objects held at Pitt Rivers —  Hicks said, is now.

Restitution is an activity that has been ongoing in many institutions, he said, but not for all objects.

“The Pitt Rivers has often returned human remains, even cultural objects, to First Nations in North America," he said. "There seems to be a sticking point with Africa. And I think part of the thing we need to be aware of is that we have mapped our conversations over restitution onto settler colonialism and the settler-colonialist context of North America.”

The work of returning objects to their rightful owners has, he said, long been an accepted practice by museums and private owners when it comes to returning artworks stolen by the Nazis during the Holocaust to Jewish families.

But similar progress, he said, hasn’t been made in regard to the extractive colonialism, the process by which art objects were violently removed from a Royal Court in the Kingdom of Benin and eventually came to rest in display cases at the Pitt Rivers, the Indianapolis Museum of Art, and other museums.

“You have to say that racism has to be part of this reason, maybe, for why Africa is being really treated differently from other parts of the world,” he said. “I do worry a great deal about that and why we are not making this sort of progress for the continent of Africa at this point.”

In the Art+Ethics webinar hosted by the IUPUI Arts + Humanities Institute, on Dec. 8, Hicks said that one of his goals was to inspire conversations about stolen artifacts, wherever they happen to be and however they were acquired.

One goal, he said his book, he said, was to promote the work of the Legacy Restoration Trust established in Benin city, Nigeria, where a new museum is planned to house the looted bronzes.

Much work remains to catalogue looted objects, said Hicks, who admits that his own documentation work is provisional. He also said that progress could be made by beginning conversations wherever stolen objects can be found, including Indianapolis.

“How many times does an object have to change hands [...] in order for it no longer to be stolen?” he asked. “I don't think we can answer that question, of course. It remains an object which should be subject to these conversations.”

For this article the Indianapolis Museum of Art at Newfields gave this response: "Newfields is very aware of the ongoing international issues surrounding works of art from Benin City, as well as others relating to a diverse array of cultures. We, like many museums around the world, are engaged in these conversations and very supportive of this important dialogue."

Editor's note: this article has been changed to correct an error: there is not as of yet a museum under construction to house the Benin bronzes as indicated previously. There is however, one being planned.

Some thoughts on Newfields' public relations debacle and their desire to maintain "traditional, core, white audiences."