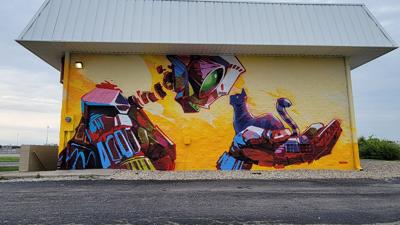 Indianapolis wasn’t always this pretty. Through the work of local businesses, the Arts Council of Indianapolis, and most importantly the graffiti artists, muralists, and painters in our city, streets are becoming more gallery than alley.

Dan Thompson, aka Dan Handskillz, has seen storefronts and concrete walls change over the years and has had a big hand in their transformation. His work can be seen on IndyGo buses, public murals, and commissions from clients including Red Bull, Indy 500, and Klipsch. The founder of the graffiti partnership Fantastic Aerosol Brothers, or FAB Crew, he has recently completed his latest contribution to the Indianapolis landscape. As an artist for this year’s Jiffy Lube Mural Project, Thompson’s work, “Eye 2 Eye,” can be seen on the Eastgate Jiffy Lube on Shadeland Avenue.

Before FAB Crew, before Jiffy Lube, Thompson was a kid on Indy’s Eastside enamored by the street art he saw in magazines. An interest he says began in 1997 never faded and began simply with a desire to create good work.

“We wanted our work to be as strong as anything you might find in a gallery,” says Thompson. “Back then there was no money, the public hated graffiti, and the term ‘street art’ didn’t exist. It just lit my young brain on fire and eventually grew into a career in murals.”

Completing his Jiffy Lube mural is a particularly significant moment in his career. Proud of the work and his participation, he remains impressed with the scope of the project and the artistic freedom so important to an artist.

“Indianapolis has seen its share of mural projects, but nothing reaching so far and wide as the Jiffy Lube murals,” says Thompson, “Institutional and corporate partners rarely allow the level of creative expression I found working with the Arts Council and Jiffy Lube on this project. I think it’s raising the bar for artists and our audience.”

As an artist, Thompson appreciates the value and unique opportunity to share his work in full view for the public. The stage displays the excitement art fosters, the inspiration it offers, and the connection that completes its purpose.

“I think painting directly onto the urban landscape provides a connection to the city that is unmatched,” he says. “Any time you work in public, you surrender ownership of your artwork to anyone and everyone. Murals can be just as much a landmark as any monument and have the potential to connect on a much more personal level. It means a lot to know my work lives among my fellow citizens.”

The location of his mural, and his roots, is also significant for Thompson. “The store I painted specifically is on the Eastside, where I grew up and where I live now,” he says. “There’s never been much public art in that community, and I’m hoping that just by seeing it other people might be inspired to create something themselves.”

The pride and accomplishment that Thompson feels from his work, he hopes, translates to how the public feels about the space they live in. Too often art assumes a role of privilege. If that’s the case, he aims to privilege us all.

“What stands out the most to me is the fact that public art becomes an instant point of pride for the people who live among it,” says Thompson. “Many people grow up believing nothing special happens in their community; art and culture are for those who can afford it. That is definitely how I grew up. By placing a work of art in a public place, you have the potential to show people that special things can happen anywhere, and anyone can make art if they’re willing to work at it.”

Thompson remembers an interaction while he was working on a mural downtown. A bystander walked by the wall and watched the work for a while. “After a few minutes,” says Thompson, “he approached me and asked, ‘What made you think that you could do something like this?’”

Thompson thinks the question is just as important as the answer. “The question tells you so much, but specifically it shows that art seems completely out of reach to most of us,” he says. “I didn’t have an answer then, but now I do. Other people showed me that it was possible, and I looked for places to try; over and over. Graffiti gives you that strange confidence. No art school or grant can give you permission, so the institutions can’t stand in your way.”

All of the murals that Thompson has had a hand in, and certainly every mural around the city, seem to reinforce the same point: where we live is important. The streets we walk, the buildings we pass, the images we receive, mark our place in the city. Thompson thinks that place should be pretty. And like most artists, he has his own ideas of an artistic utopia. Not surprisingly, it includes art everywhere.

“I like the thought of communities becoming open air art galleries. It’s a fantasy I have entertained for years. I have seen the shift in the way people perceive public art, from something shocking to something people demand in their cities. The reality is traditional galleries have always had a limited audience. And nowadays, they’re not the best way to sell work anyway. The most important thing for a work of art is that people see it, and we’re living in a time when art has never been easier to find.”