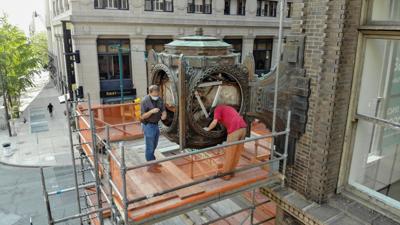 Indiana Landmarks installed the repaired L.S. Ayres clock in a timely fashion to mark the 2020 Indianapolis holiday season, following a four-year restoration project that began when someone phoned Paul F. Smith at his home: “Every day I look at the Ayres Clock.  It’s not working.”

Smith recalled the conversation during the Dec. 3  Indiana Landmarks and Penrod Society online event, ’Christmases past, present, and future’ that also featured Ken Turchi, author of L.S. Ayres and Company: The Store at the Crossroads of America and Dan Evans, Jr., whose father worked at Ayres from 1948-1976, rising through the ranks from personnel staff to president and CEO.

Learn more here about restoration of the Ayes Clock and Cherub;

Located on the corner [of Meridian and Washington streets] since 1936

Indiana Landmarks is leading the repair and financing efforts

“Why are you calling me?” continued Smith, recalling the incident that spurred the restoration.

“Because you get things done,” replied the caller.

And therein hinges a truism I myself have experienced with the city of Indianapolis employees, governance, and citizen connections.  You just have to follow the dots. In 1992 the city bought the downtown L.S. Ayres building along with the clock and its seasonal cherub to become a cornerstone of the Circle Centre Mall. Although Smith, in 2016, already had retired following a 22-year tenure with the city of Indianapolis in parks development, to the caller he was still on the docket to “get things done.”

During a phone call to verify my own memory about his city connection, Smith reminded me that navigating “the how” is essential to fulfilling the need. Of course,  he took it from there, calling Marsh Davis at Indiana Landmarks. And, of course, Davis recognized the opportunity once again to be of community service and took it from there.

“Eighty-four years of hanging over the southwest corner of Washington and Meridian streets, exposed to harsh weather and exhaust fumes, has taken a toll on the city’s iconic “Ayres Clock,”  reported Indiana Landmarks in a news release following a feasibility study. “Some of the bronze exterior has corroded and fallen off. Inside, water damage has left holes in the steel, and trash and debris has filled the bottom.”

But the good news is the main structure is solid. Still, much restoration work will need to be done to ensure the clock is around for another 80+ years.

The five-ton electric clock, designed by Arthur Bohn, of the then architectural firm Vonnegut and Bohn, came at the same time as the launching of the 1936 trademark, “That Ayres Look.”

“More than 350 people and organizations stepped up to donate $60,000 to the [restoration] project in just 24 days to repair and replace the inner workings of the timepiece,” announced a subsequent Indiana Landmarks news release, adding,  “Now that the clock is working, under the care of craftsman and artist  Brose Partington, Indiana Landmarks has turned its attention to the bronze and steel case that surrounds the clock.”

“As much as it holds the city’s most beloved clock, that bronze case holds decades of memories,” said Smith, who earned the designation, Ayres Clock Restoration Project Manager, “We want to ensure it continues to be a city landmark for generations to come.”

More reports from Indiana Landmarks followed: The restoration would include updating the electrical system to low-cost LED lights and reinforcing the steel support beams that attach the 10,000-pound clock to the historic building that once housed the L.S. Ayres department store. And best of all, “The project team plans to have the clock repaired in time to welcome the bronze cherub that appears on the corner each Thanksgiving eve to announce the arrival of the [2020] holiday season.”

The 1,200-pound cherub, sculpted by David K. Rubins, first appeared on Thanksgiving eve 1947, and just as unobtrusively disappeared on Christmas Eve, a ritual carried on ever since. That same year Ayres also began their annual Santa Claus Express Train as a holiday institution. The Indiana State Museum now carries on this tradition, along with a showcase of Ayres Holiday Windows, and the ever-present realization of the original elegant L.S. Ayres Tea Room.

Lyman S. Ayres first partnered with N. R. Smith in 1872  for the then dry goods store The Trade Palace, which was renamed L.S. Ayres in 1876. Ayres became an industry leader known for sterling employee and customer relations. In 1958, then owner Lyman S. Ayres II  opened a satellite in the Glendale Mall. In the 1970s the retail business structure was changing, and Ayres was swept into national takeovers. Ayres downtown closed in 1992.