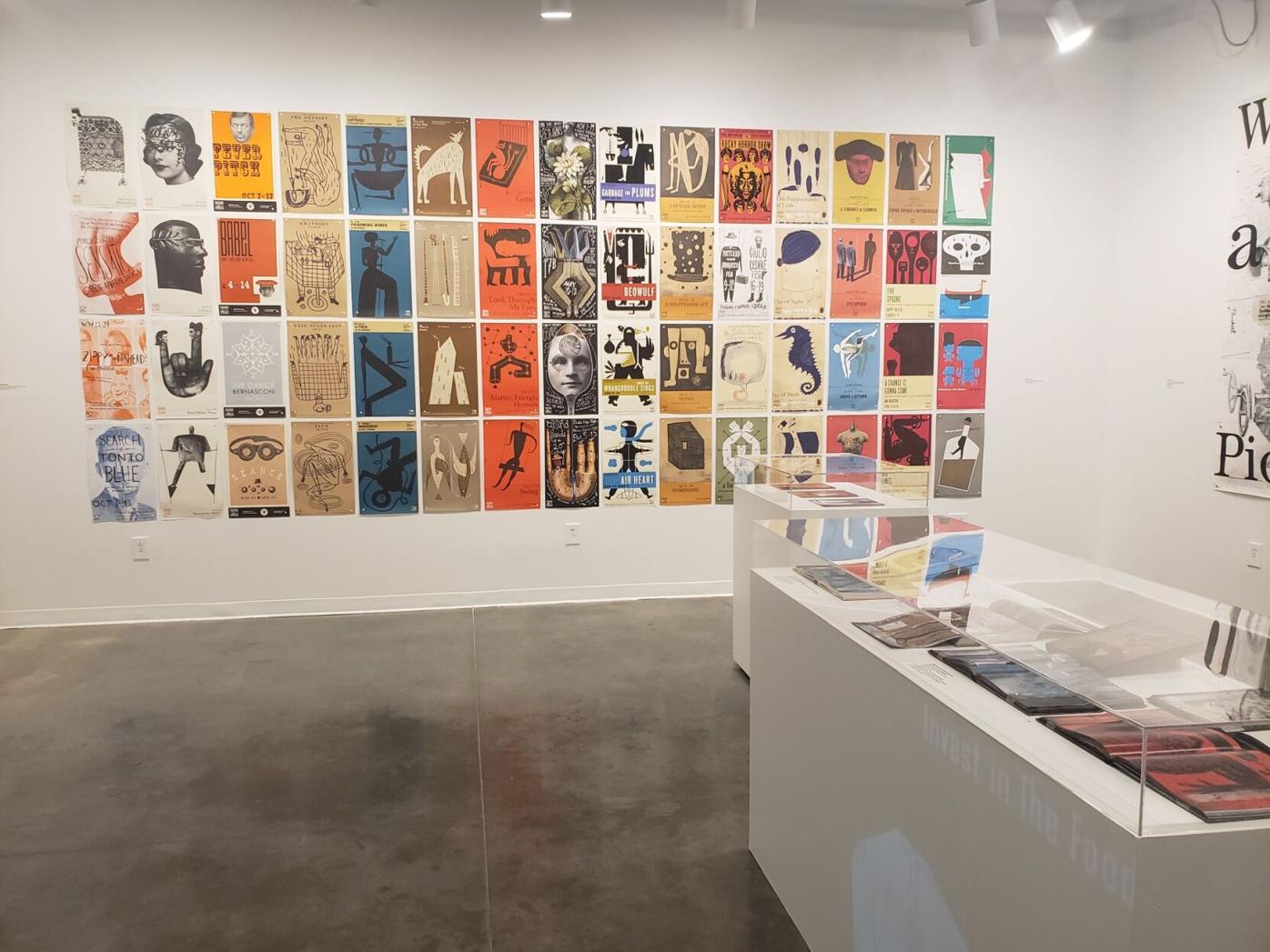 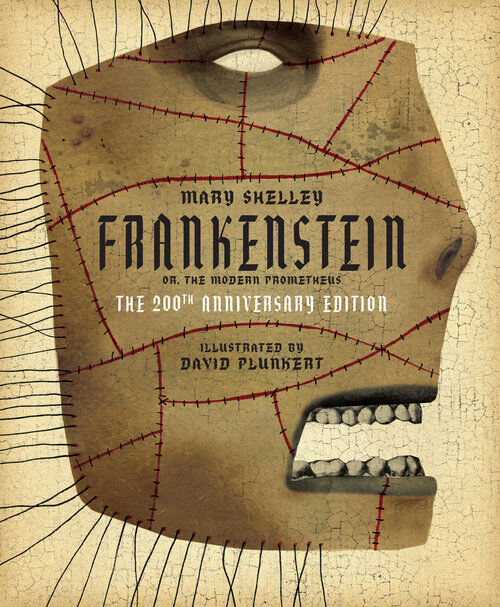 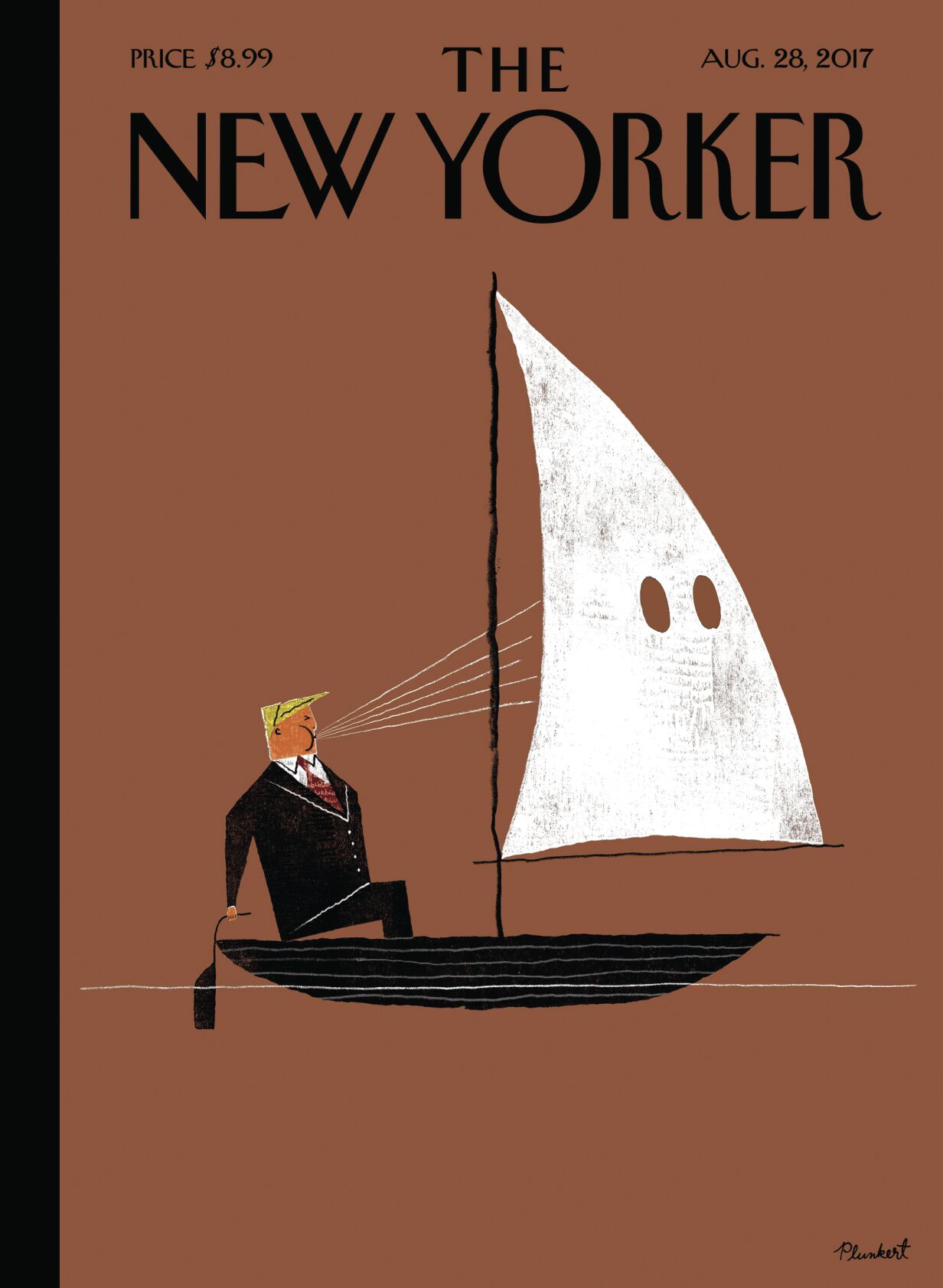 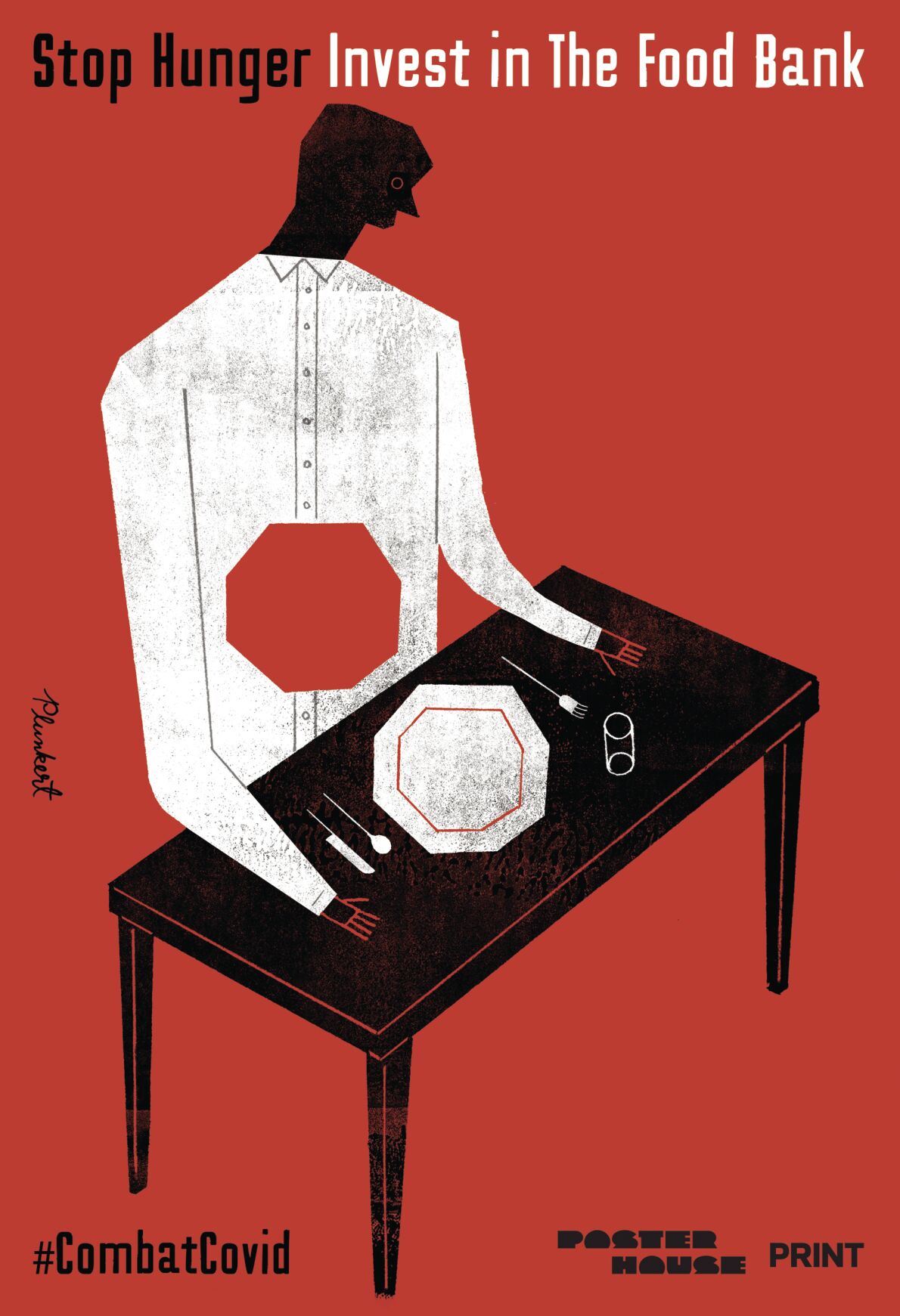 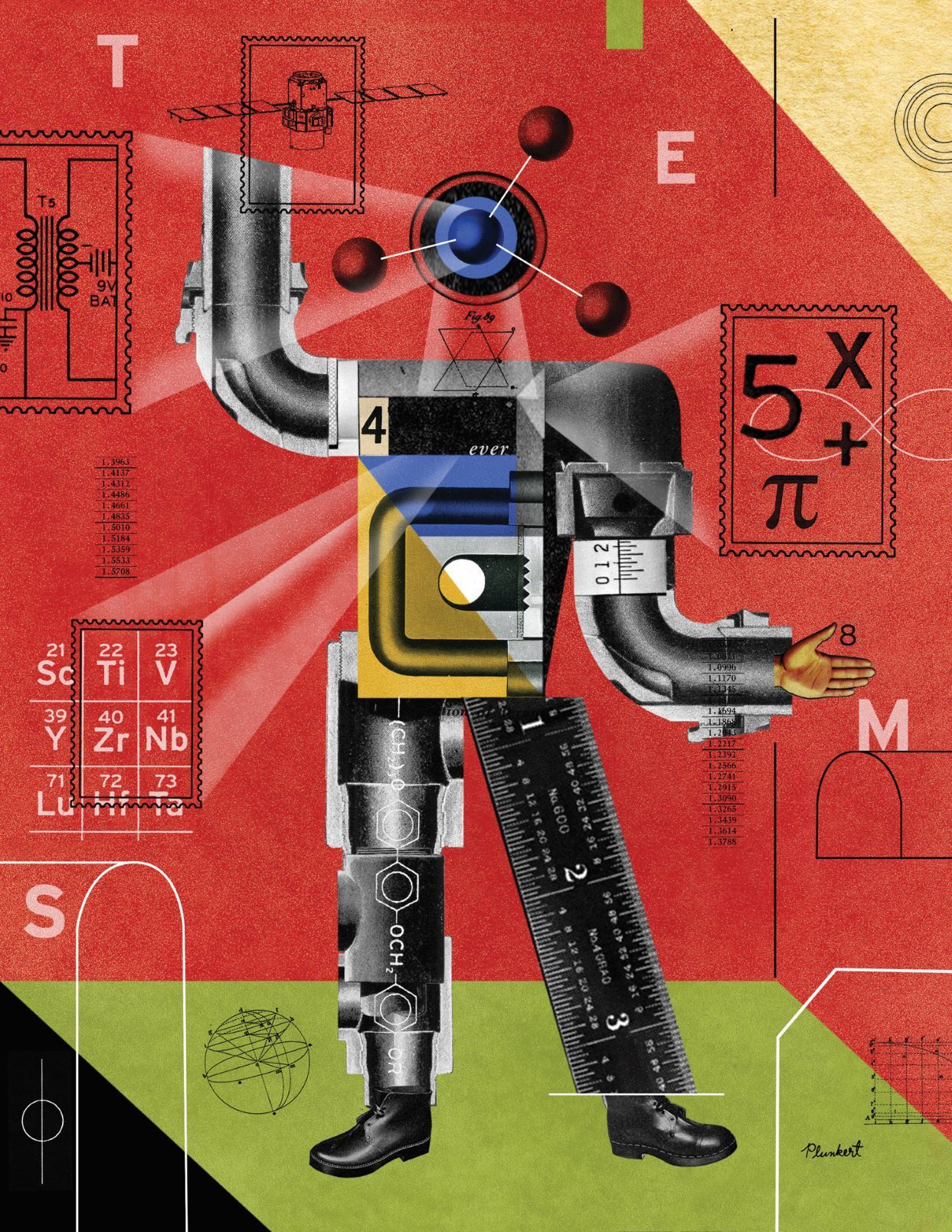 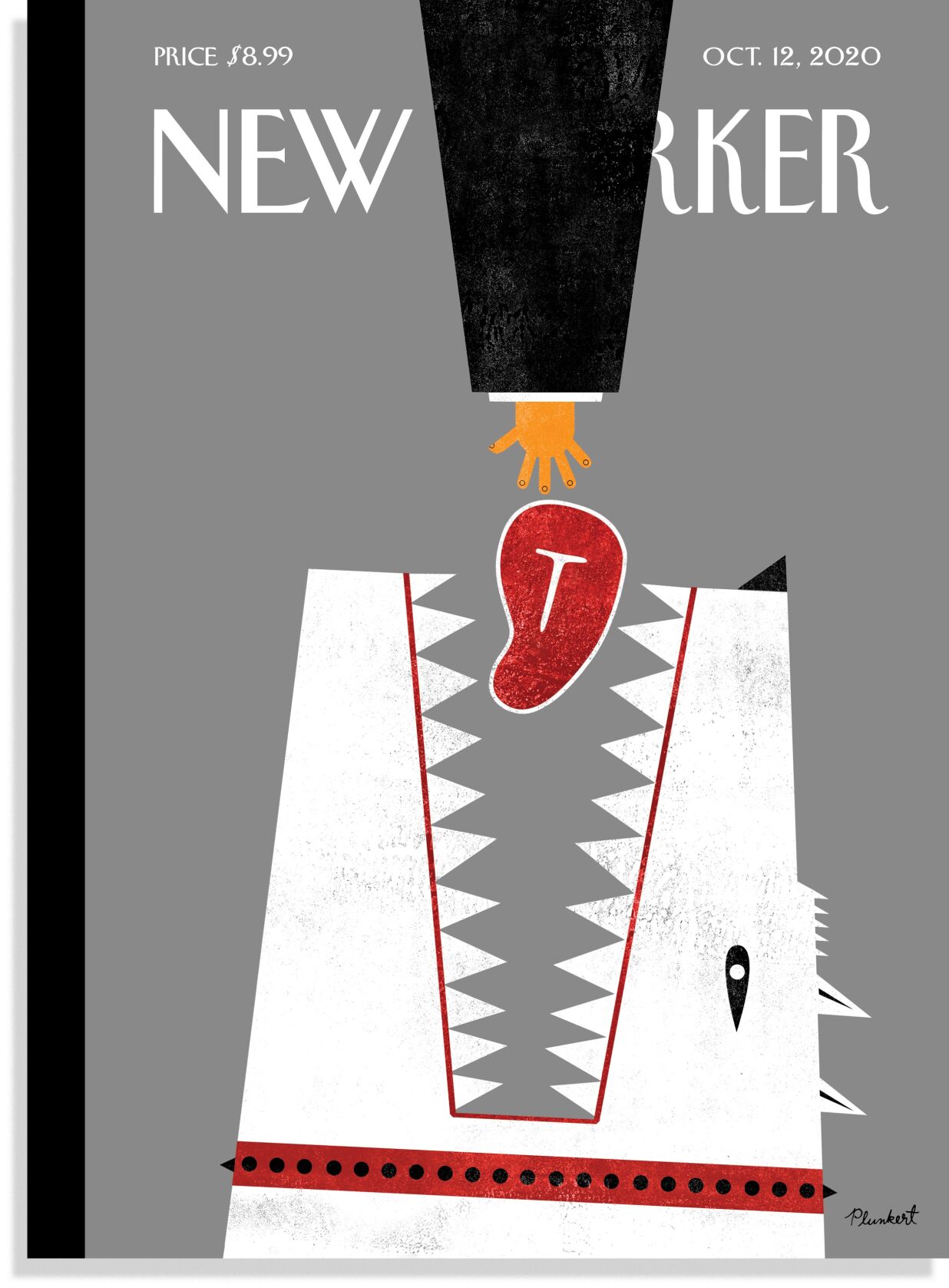 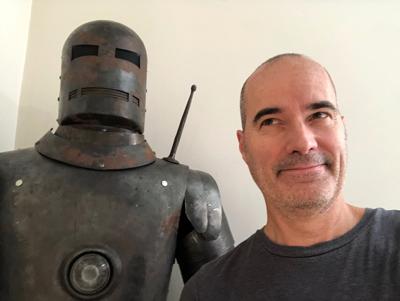 You may have seen David Plunkert’s cover for the Oct. 12, 2020 New Yorker, in which you see a hand-feeding a T-bone steak to a dog, drawn in bold geometric shapes. The ravenous jaws, drawn to resemble two juxtaposed tooth saws, make the dog seem mechanical, machine-like.

The hand giving the red meat to the dog —  that represents President Trump’s hand —  seems oddly small, a reference to certain remarks Trump has made on the debate stage during the 2016 Republican primaries, and to certain remarks others have made about him in response.

Plunkert said he got his inspiration for this depiction from the first Biden-Trump debate on Sept. 29; he was watching the debate because the art staff of The New Yorker wanted him to do so.

“Sometimes The New Yorker will do what I call a cattle call,” he said. “You'll get an email if you've worked at them previously and they'll just say 'Hey we've got an upcoming cover happening.’ The guidance is normally pretty loose in regards to, if there's an event happening, they'll want artists to take a look at it.”

Note: The Herron Galleries will be closed to the public during IUPUI's online instruction period from Nov. 21 to Feb. 8.

The virtual reception for the Herron exhibiting artists will take place via Zoom from 6:30 to 8 p.m. Thursday, Nov. 12, featuring the exhibiting artists. This event is free and open to the public with advance registration. Register to attend this free event.

Watching the debate was Plunkert’s “illustrator homework” to get an idea for what the next cover would look like.

“I was one of the unfortunate folks that had to sit through the entire thing,” he said. “My feeling was that the big idea from the debate, or the big thing that was left hanging, was Donald Trump's giving that kind of mealy response to ‘Do you disavow white supremacy?’ and then also the sort of strange response he had about the Proud Boys, ‘Stand back and stand by.’ So, the thought for the cover was that Trump somehow always manages to blow a little bit of air or throw a little red meat to these particular folks that follow him.”

In his original depiction, he had Trump feeding the dog a bone. The New Yorker’s art director Françoise Mouly suggested he change it to red meat.

Plunkert’s exhibition The Visual Communi-gator, running through March 13 at the Herron School of Art & Design, will have the three New Yorker covers he illustrated for the New Yorker on display.

It’s the first in Herron's new series of exhibitions examining the best of today's illustrators.

(The exhibit will run concurrently with exhibitions of the work of artists Elizabeth M. Claffey, Rania Matar, and recent M.F.A graduates.)

Based in Baltimore, MD. Plunkert is deeply engaged in his community. His ongoing relationship creating posters for the Baltimore Theater Project is one example of such engagement.

The exhibition features a grid of 68 posters Plunkert created for the theater group close to 20 years.

“The idea behind the deep dive into his theatre posters is to show the kind of range he's capable of across the board and also this idea that he’s going back to the same client over and over and over again with great effect,” said Joseph Mella, director and curator for the Herron School of Art & Design, who calls this work “Plunkert’s ongoing magnum opus.’”

“I think he actually embraced that challenge and makes it fresh, really literally every single year that he comes back to it,” he said.

Other posters he designed include one he designed for Yo Yo Ma's 2018 performance at the National Cathedral in Washington, D.C.  His book illustration projects include Frankenstein: The 200th Anniversary Edition (2018) and Edgar Allan Poe Stories & Poems (2014).  All of this work is on display in the exhibition.

He has also received commissions from the United States Postal Service to design and illustrate a series of postage stamps, on display in the exhibition, celebrating STEM (science, technology, engineering, and math).

Running Spur Design out of a Baltimore, Maryland studio with his wife, illustrator Joyce Hesselberth, the firm takes on a wide range of branding, illustration, and graphic design commissions, designing brochures, covers, logos, and websites. They have an eclectic client list including Rolling Stone magazine, Capitol Records, Netflix, The Criterion Collection,  Maryland Institute of Art, and Dogfish Head Craft Brewery.

Plunkert was recently chosen to be one of the artists employed in a city-wide public campaign titled #CombatCovid spearheaded by Poster House that displays his work on 1,800 digital billboards throughout New York City.

Despite the name of the PSA campaign, the messages in the campaign are not exclusively COVID-related. You might see a message inspiring gratitude, or related to safety, or —  in Plunkert’s case —  combating hunger.

You can see a projection of his "Stop Hunger" poster on the gallery window as you approach Herron’s Basile Gallery.

“The big conceptual idea of the #CombatCovid poster is the empty stomach and empty dinner plate echoing the same stop sign-shape,” he said. “I tend to prefer a limited color palette and, in this case, the fiery orange-red background does the heavy lifting as a call to action of stopping hunger.”

Plunkert has also ventured into the realm of music video production. In 2019, he headed a team that produced two recent videos for the Brooklyn-based rock band They Might Be Giants. One of them, "The Communists Have the Music", is in the exhibition.

“TMBG is great to work with, though they are strict in not wanting a literal depiction of the song lyrics,” Plunkert said. “That helps keep things more abstract and strange. In the case of ‘The Communists Have the Music’ I was working more or less from the artist David Cowles’ storyboards but I had a lot of freedom to drift visually.”

“I originally wanted to be a cartoonist,” he said

You might actually get that impression walking around his studio, where he has a lifesize, wearable armor on display which he describes as “the first Iron Man suit.”

“I commissioned an armorer in Canada to make this for me actually years before the first Iron Man movie,” he said.

He said that, when he began his art education as an undergraduate, he didn’t really know what graphic design was.

“I visited several colleges but Shepherd University at the time stood out because they had what was almost like a one-room schoolhouse,” he said. “At the time, the newness of the program stuck with me, and I pretty much responded to this idea that, according to instructor Michael Nuetzel, that graphic design isn't about making a pretty picture but about solving a visual problem.”

While his highly Instagrammable work is all over the internet, he doesn’t explore online tools all that much.

“I'm very comfortable with digital collage and plain old cut and paste collage,” he said. “I do a fair amount of outside pencil drawing and then scanning that in and then also scanning in my paint textures.”

Sometimes he gets blown, as it were, in different directions. His first New Yorker cover, titled “Blowhard ” —  which shows a stylized Trump in a sailboat, blowing hard into a sail that looks distinctly like a Ku Klux Klan hood —   was certainly one of those occasions.

That is, he described that work as a lot more pointed than his usual illustration, and a little more pared down to visual essentials.  But that’s not the only difference.

Plunkert illustrated that work in the aftermath of the Unite the Right Rally in Charlottesville when he saw images of  “actual Nazis walking in a parade.”

“President Trump’s weak pushback to hate groups — as if he was trying not to alienate them as voters — compelled me to take up my pen,” he told the New Yorker’s Mouly in 2017.

But for Mella, the exhibition transcends any particular subject matter Plunkert might be inclined to explore or medium he might seek to employ in his work.

“At the end of the day, it's all about showing the best illustration and graphic design, period,” he said.  “The reason why we look at Plunkert is because he's really one of the best out there.”