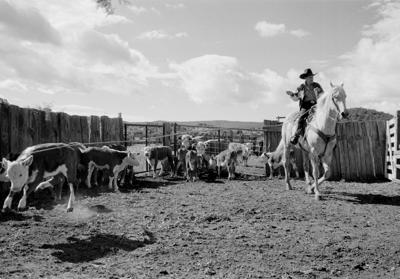 The new exhibit at the Eiteljorg Museum of American Museum and Western Art busts some hard myths about gender. That is to say, you'll find more than just cowboys in the American West.

Hard Twist: Western Ranch Women, a traveling exhibition on loan to the Eiteljorg from the National Cowgirl Museum and Hall of Fame in Fort Worth, Texas, opens Jan. 30 and continues through April 25. The exhibit features 62 black-and-white photographs by photographer Barbara Van Cleve of ranch women who compete in rodeos.

Part of the Eiteljorg’s 2020-21 theme of honoring women, the exhibition is included with regular museum admission.

RITA KOHN: I first connected with Barbara VanCleve when her book, Hard Twist: Western Ranch Women was published in 1995 by the Museum of New Mexico Press. The imagery and the stories drew me in and I followed her work as she gained attention in galleries and with other authors who invited her to contribute her photographs to their published books; when, how, did you connect with Ms. Van Cleve, and why did that lead you to want to curate for Eiteljorg this new traveling exhibit?

ELISA PHELPS: We are always on the lookout for traveling exhibits that meet our mission of sharing the art and heritage of the American West and the Native peoples of North America. I knew about Barbara Van Cleve’s beautiful photographs from her books. When I learned that the National Cowgirl Museum and Hall of Fame (into which Van Cleve was inducted in 1995) had a traveling exhibit featuring Van Cleve’s images of ranch women in the West, it seemed like a good match for the Eiteljorg Museum. The exhibit has traveled widely but never to our region. For 2020-2021, museum staff planned a year of exhibits and programs around the idea of honoring women. We developed an exhibit about the diverse experiences of women in the West as told through the quilts they made, and an exhibit of contemporary art by Native women artists —  which remains on display through March 21. With its subject matter and artistic medium of photography, Hard Twist was the perfect complement to those exhibits and fortunately, it was available for us to host during our “year of honoring women”.

KOHN: What are the Indiana connections with the themes of this exhibit and the books featured in Hard Twist?

PHELPS: The images in the exhibit visually embody the women’s commitment to the land and hard work, their physicality, and even their love of family. These are universal themes regardless of whether you are in Indiana or Montana. Unspoken, though powerfully evident, is the women’s success in the male-dominated world of ranching. Like farming, which is such an important part of Indiana’s economy, ranching is a demanding, physical, and often difficult profession requiring tenacity and persistence. While the mountain and plains landscapes may be distinctly Western, the determination and dedication of the women ranchers featured is something shared by women everywhere.

KOHN: What should virtual and on-site visitors seek to take away from experiencing the exhibit?

PHELPS: In focusing on ranch women we hope the exhibit does a little cowboy myth-busting and encourages recognition and consideration of the diverse roles women hold in the West and all across America. The National Cowgirl Museum and Hall of Fame generously allowed us to borrow a number of objects belonging to women featured in exhibit images. Ranging from a well-worn saddle, to candy-colored boots, the objects on display humanize the women and speak to their sense of humor, family ties, and dedication to their work, which are things we all share.

KOHN: Why is it significant for us here in Indiana to pay attention to this comment offered in 1995 by one of the subjects featured in the book: “You’ve shown the country what our life is about. I hope they’ll come to understand and accept us.” Is it real or is it a misconception that people on Western ranches are not understood and accepted by people who live elsewhere?

And if this is a truthful perception by people in New Mexico, how is this exhibit essential for us here in Indiana [and beyond] to pay close attention to the images and words, feelings and contributions by people who are the subjects of the exhibit and the books?

PHELPS: Cowboys riding the range is a ubiquitous image in Western art. They are often presented as heroic figures dealing with rugged landscapes, harsh elements, and wayward cattle. There are numerous works in the Eiteljorg’s Western art galleries featuring this romanticized version of life on the range. The Hard Twist exhibit powerfully makes the point that women are key figures in ranching and that the work is demanding, physical, often dirty, and not in the least romantic. As an urban dweller, I give little thought to where my food comes from and who the people are who produce it. While the exhibit is not specifically about ranching, it humanizes and personalizes a way of life that may be very different from our own, and does so through images of daily life we can relate to.

KOHN: When I first learned about this exhibit coming to the Eiteljorg, I searched for a link to Aug. 25, 2019, CBS Sunday Morning program that featured an interview with Ms. Van Cleve. She had recently been inducted into the National Cowgirl Museum and Hall of Fame, and I recalled being drawn into her comments about women of The West. As in previous Eiteljorg exhibits, where other such interviews have been part of the outreach, will this and/or other such segments be included? How do these spoken interviews expand the visual experience on the walls?

PHELPS: The CBS Sunday Morning interview, which for folks who are interested can readily be found on YouTube, is a great introduction to Barbara Van Cleve and her life and work. While the video is not part of the exhibit, we will be hosting a virtual talk by Ms. Van Cleve on March 13. Information about this and other talks will be available on our website, www.eiteljorg.org/calendar. Three Eiteljorg curators (including me) will be giving virtual “Curator’s Choice” talks about different aspects of the exhibit. The first, at noon on Feb. 5 focuses on the stories of some of the women whose images are featured. The second, on March 5, will highlight the role of women in the West, and the third, on April 2, will explore photography as an art form. Programs like these provide additional context for the visual experience of the exhibit, but they can also be enjoyed by folks who won’t have the opportunity to visit the museum. For blind and visually impaired visitors, audio descriptions for a selection of the images will be available.

KOHN: How is the Eiteljorg linking this exhibit to what is happening in Indiana?

PHELPS: The recent national focus on the 100th anniversary of women’s suffrage was the catalyst for the Eiteljorg to develop a year of programs and exhibits to honor women and their diverse experiences in the West and Native America. We chose to highlight women’s stories through our exhibits and programs, which include virtual artist talks, gallery tours and partnerships with other museums and cultural organizations such as the Indiana Historical Society and last August’s Suffrage Centennial Block Party, and the Indiana iteration of the project El Tendedero/The Clothesline which works to erase the stigma around survivors of sexual assault and domestic violence by sharing their stories.

KOHN: What else do NUVO readers need to know about Hard Twist and the other 'year of women' exhibits and programs specially created and shared on tour at the Eiteljorg?  What do we need to be motivated to care about, connect with to do something of significance for the greater good of understanding each other and honoring each other?

PHELPS: One aspect of honoring women is to recognize and acknowledge their underrepresentation in the field and subject matter of Western art, and in the Eiteljorg’s Western art collection. Curatorial staff is working on an updated collecting plan that identifies collection gaps and goals for future acquisitions. Similarly, the contributions of Indigenous women artists, especially traditional artists of the 19th and early 20th century have also gone largely unrecognized in part because the names of the Native women who created the beautiful historic items were not recorded and are sadly lost to us.  Valuing women’s work is an issue of equity and inclusion — for the Western ranch women depicted in Hard Twist, and for all of us.