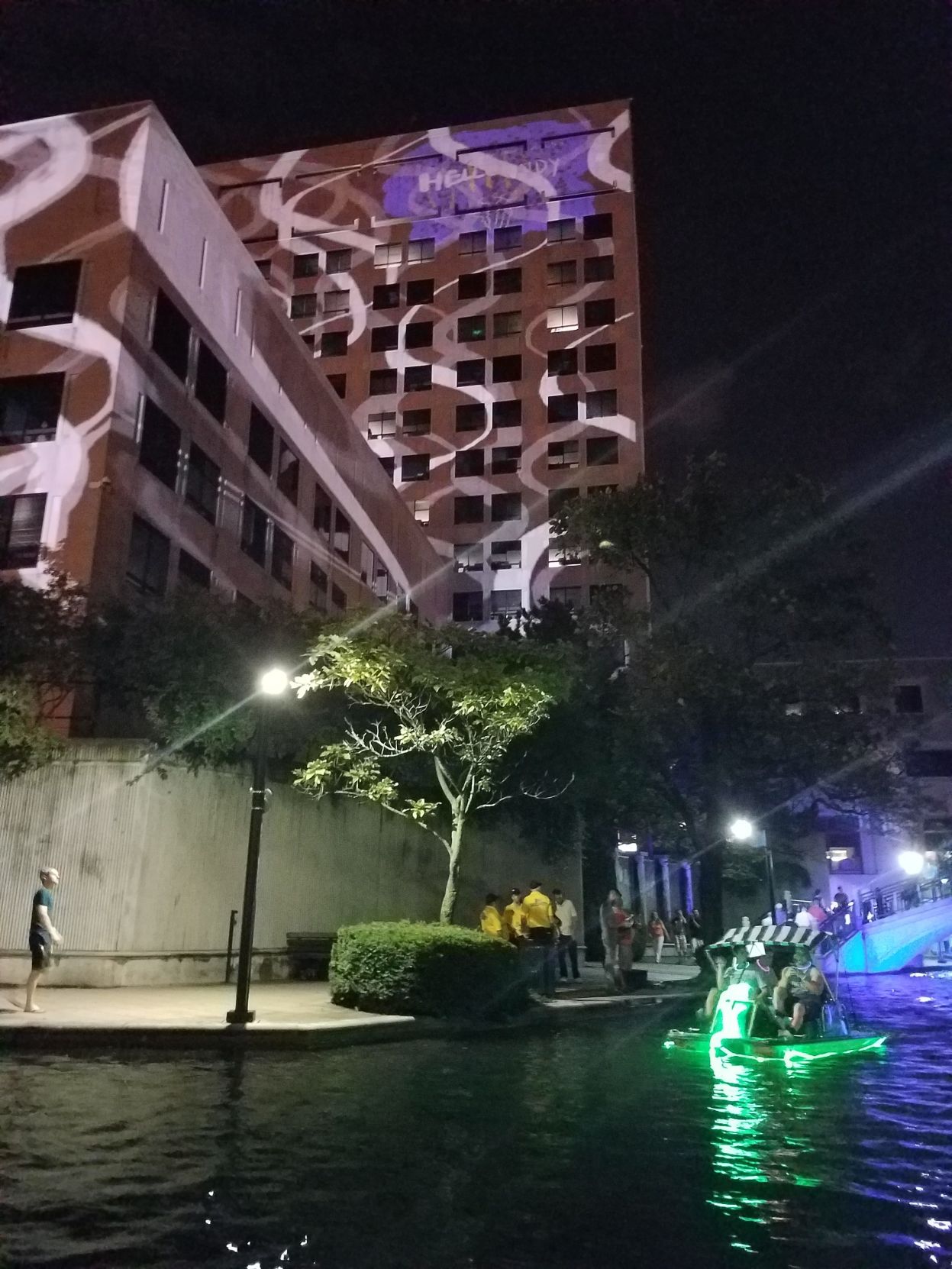 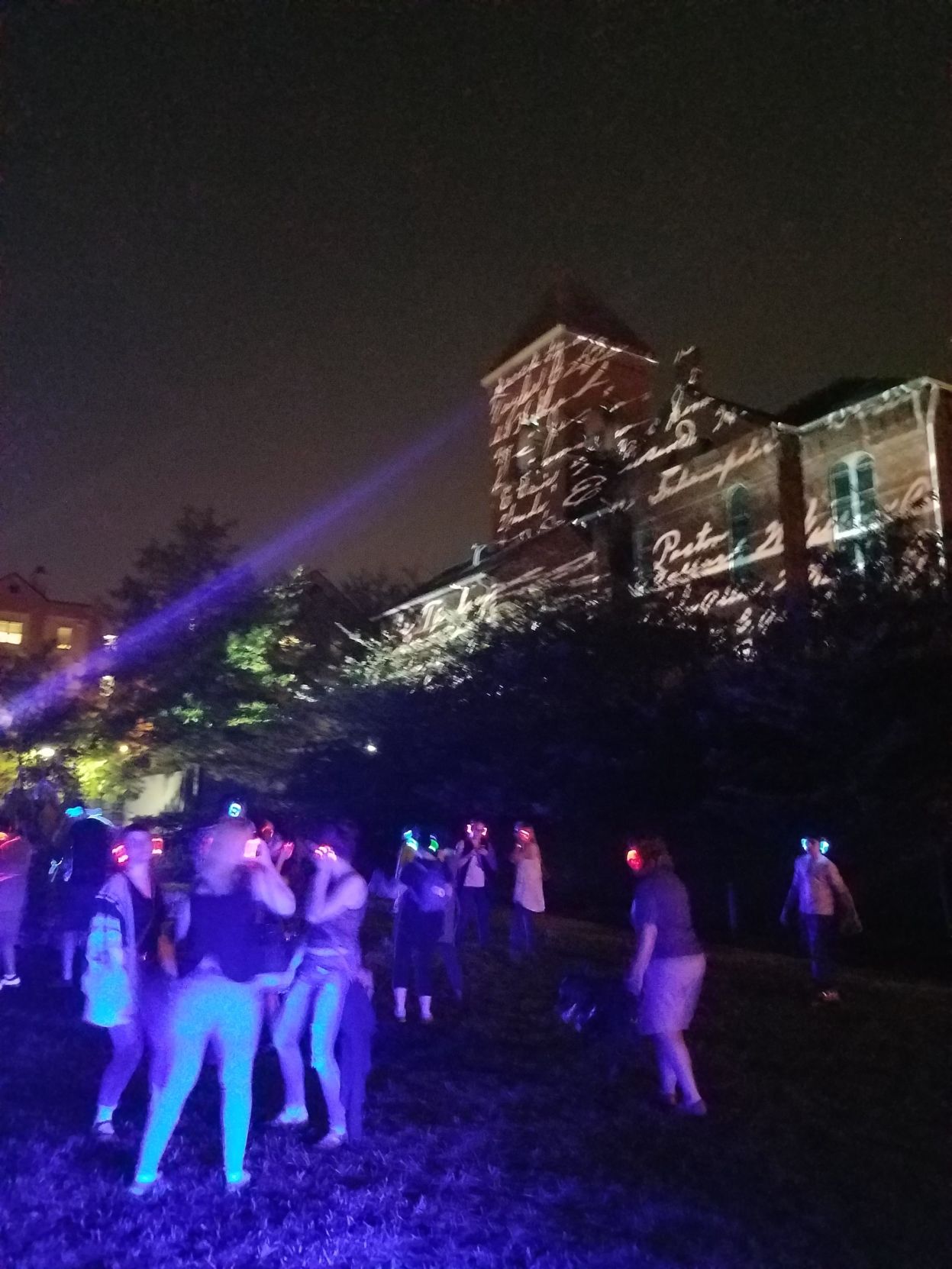 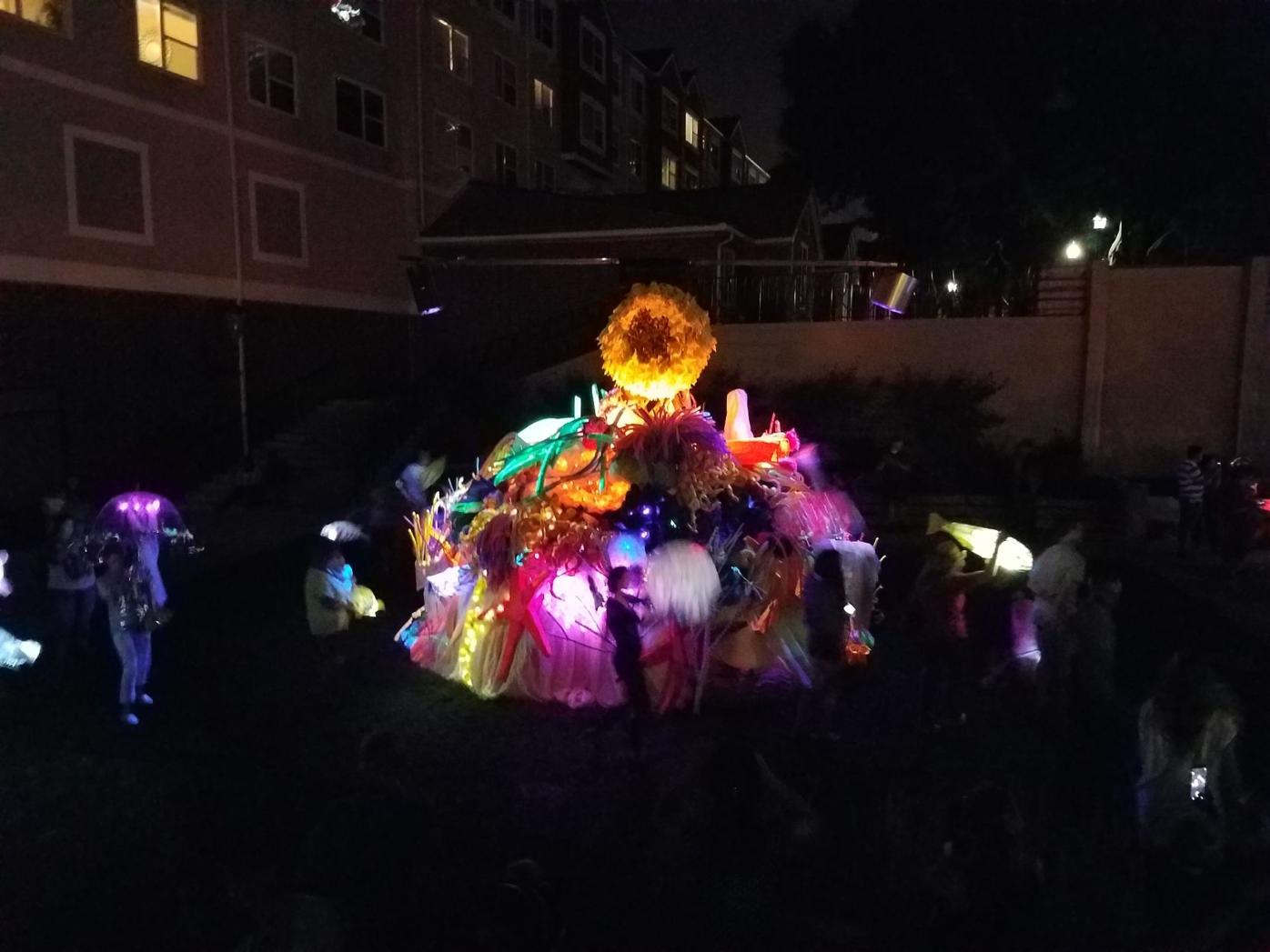 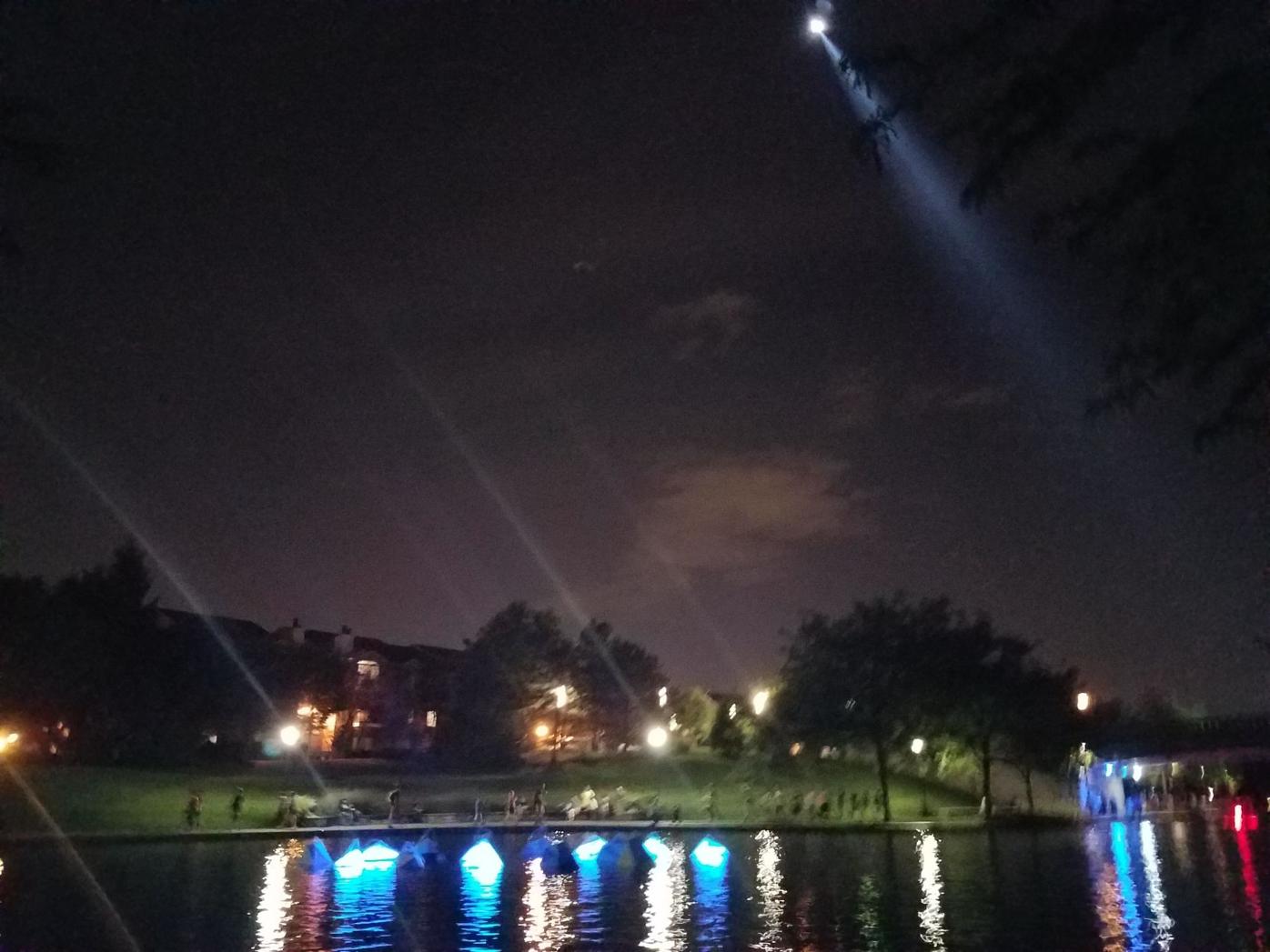 A September without Ice by Owens & Crowley with Police Helicopter overhead 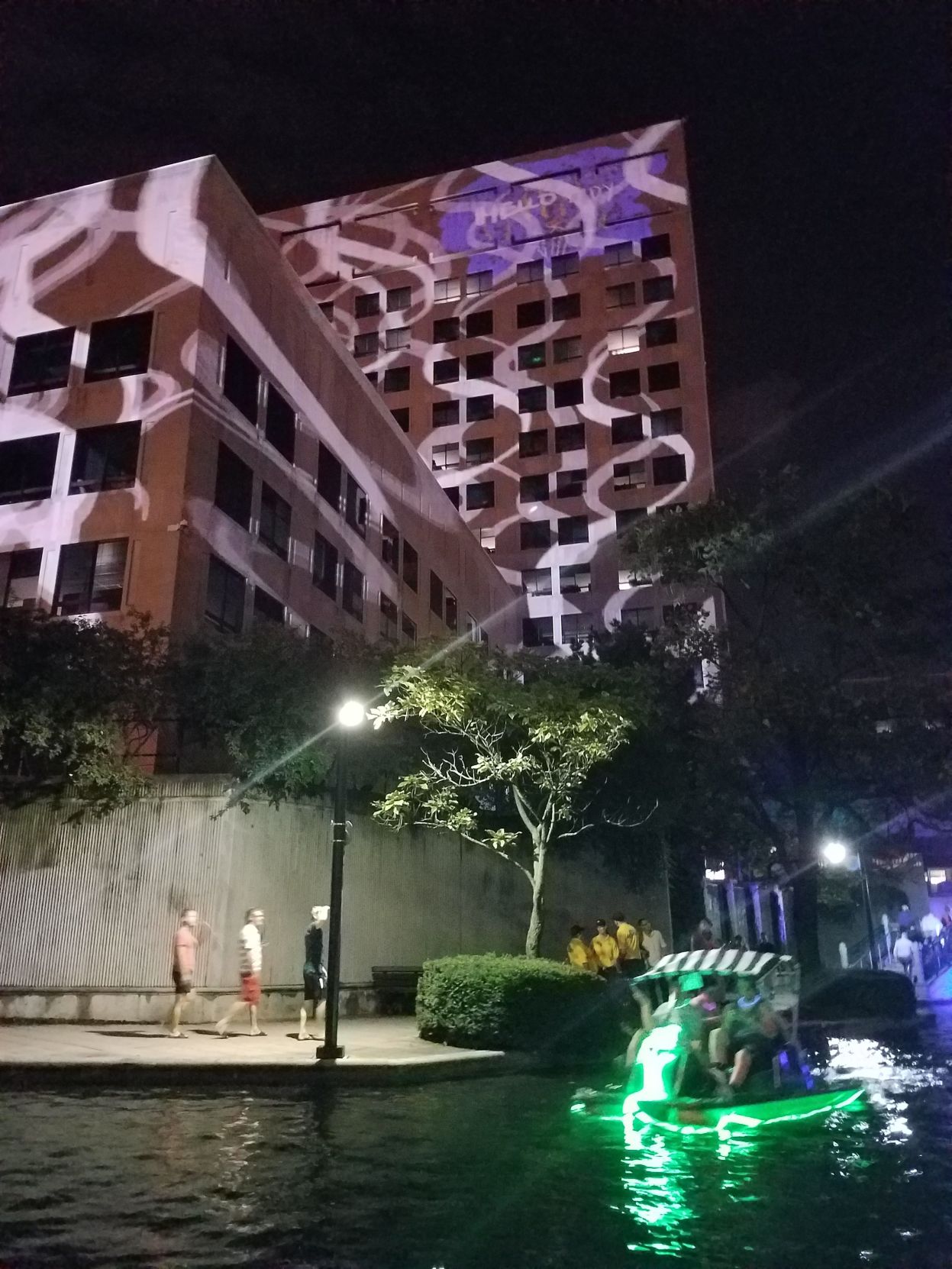 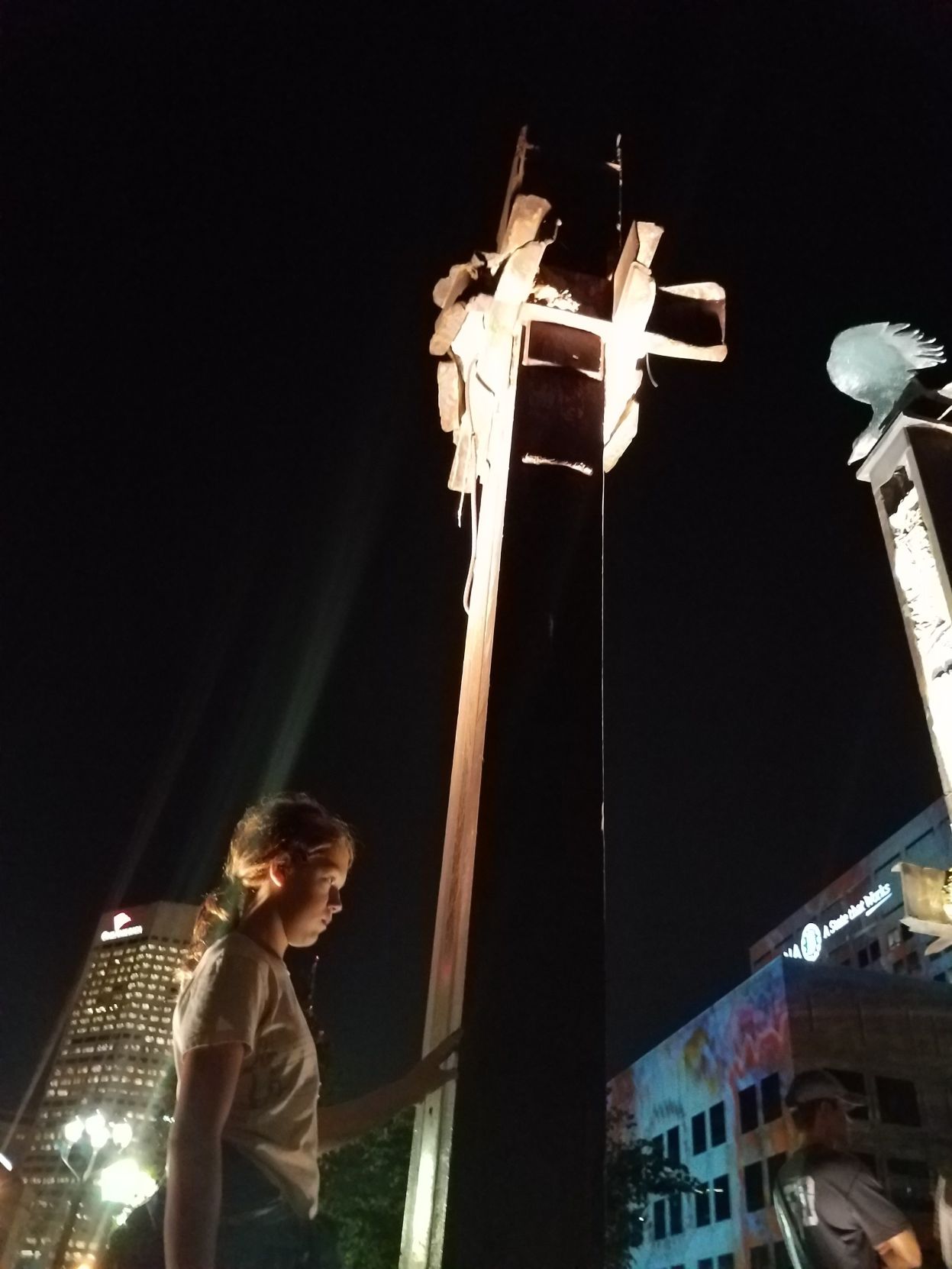 A September without Ice by Owens & Crowley with Police Helicopter overhead

My 12-year-old daughter Naomi and I arrived at the first ever Indianapolis Light Festival (IN Light IN for short) around 10:00 on a Saturday night after the drenching rains had stopped. The air was warm and humid and there were many people strolling past the banks of the downtown canal—as well as paddling in paddle boats pulsating with light.

And light was being reflected and projected here in honor of the 100th anniversary of the Indianapolis Foundation. This was the first night of this two-night event involving approximately 25 installations, in and around the canal.

The first installation we came across was “Water Mining” by Indy-based Brian McCutcheon and the performance group MANA2 at the Indiana Government Center basin.

The water was where my daughter was looking. “Daddy, look at the pink flamingo,” she said.

I looked. Indeed, floating at the edge of the water, there was a small plastic pink flamingo.

I was more interested in what looked like, from afar, like battery-powered toys on the water. These were “Paddlit” paddle boats. They were the same paddle boats that people usually rented to take out on the canal water, but they had been equipped with waterproof LED lights courtesy of Big Car Collaborative.

For the nonprofit Big Car, based in Indianapolis, getting the public involved in art is a big part of its mission. The paddlers were not only powering their paddle boats with their kinetic energy: they were altering the rhythm of the pulsating LED lights on their paddle boats. And, in their collaboration, they were becoming a part of the IN Light IN canvas, as it were.

It was something of a trip to see these paddle boats cruise down under the glow of a suddenly transformed Indiana Government Center as we walked north along the canal. The entire north-facing façade of this building was cast in a flickering blur of sharply delineated scalpels of light cutting the shadows.

This light flickered and fell on the eastern corner of the building façade, adorned by the logo Indiana: A State that Works—Governor Mike Pence’s favorite catch phrase. And just like that, this bland emblem was transformed it into something playful and trippy. Just what exactly was going on here?

The artist appropriating this canvas, and casting the building in his “Projected Visions,” projections was Ryan Patrick Griffin from Los Angeles, California.

Griffin conjured up these images on an iPad and then projected on the building from a quarter mile away.

This type of projector/computer interface technology was also being put to use a few blocks north—at the Bethel A.M.E Church at 414 W. Vermont Street, by New Albany Ind. based Tiffany Carbonneau and Louisville, KY-based Susan Crumb. To tell the story of the 150-year-old church, they were projecting images and text onto its façade with their installation “A Place in Time.”

But there was also a “Silent Disco” taking place on the lawn by the church, organized by the Indianapolis Museum of Art and Old Soul Entertainment. And it was silent because there’s a noise ordinance along the canal that prevents music from being played after 10:00. So the dancers on the lawn were all wearing blue-glowing headphones, listening to the music of two DJs spinning for two sets of microphones under the glow of the projections on the A.M.E. church.

Some of the music acknowledged the rich history of African-American jazz along Indiana Avenue.

“Do you want to go dancing?” I asked my daughter, shortly after we arrived at this location.

“I’m really, really tired,” she stated flatly, in place of a yes or no answer.

Nor did Naomi want to view the installations from a paddle boat. Nor did she want to dance around the Illuminated Reef directly across the canal (built by Barebones Productions and the Illuminated Reef Collection), something that a lot of families were doing. This seemed like the most family fun activity of all. These dancers carried with them glowing lanterns around the glowing reef. From afar, it looked like baby jellyfish circling a giant sea organism.

Nor did Naomi remark on Quincy Owens’ floating installation “The First September without Ice,” an array of 18 softly-glowing steel framed plastic “glaciers” that could only be seen as a commentary on Global Warming, on how the human-caused global warming is causing arctic sea-ice to melt.

As we watched, a couple in one of the Paddlit boats—pulsating red in LED lights—cruised past the coolly flickering icebergs. These shifted in color from green to blue and back again before our eyes. And then a helicopter passed by, beaming its spotlight along the canal banks.

Doubtlessly, the couple powering the boat with their feet had more in mind than global warming that evening. And of course, that is the problem with climate change: it’s hard to appreciate the problem when it (usually) doesn’t affect our daily lives.

And it occurred to me that this interaction between installations — and the concepts embodied by them—was the most exciting thing about IN Light IN for me.

My daughter, who clearly was not excited this evening due to being up late, was using my shoulder as her pillow.

But there was something — not part of IN Light IN — that I thought might wake her up a bit.

So we climbed up out of the canal to see the 9/11 memorial at 421 W. Ohio Street, consisting of two steel beams that had been part of the structure of the World Trade Center and a six-foot-high granite wall carved with remembrances of the catastrophic attacks happened almost 15 years ago now. One of the beams is capped with a stone sculpture of an American eagle.

Naomi seemed moved by what the memorial represented; she reached out and touched one of the vertical beams with her hand. At the same time, I was looking towards the downtown skyline from which spotlights—some of them vertical—emanated.

It was then that I recalled the Tribute in Light, the powerful twin lights that had cut vertical effigies through the New York Sky in April 2002, to memorialize the twin towers that were no longer there.

We descended back down to the canal.

On the way out we again passed the installation “Water Mining,” in the Indiana Government Center basin. Indy-based Brian McCutcheon and

Jordan Munson, from MANA2, were on hand to answer the questions about the mechanics of their installation, which was projecting ghostly waves of light dancing in tandem to the eerie music recorded underwater.

It was Naomi who had noticed the plastic pink flamingo floating in the water when we first came down to the water, the flamingo that I had thought was just a toy.

But it was, as Naomi had suspected, more than just a toy.

“The pink flamingo is an underwater hydrophone, and the sounds are being fed back to video,” Munson explained. “The video reacts to the stimulus that the mic pics up.”

Is it true, as so many say, that art knows no boundaries?