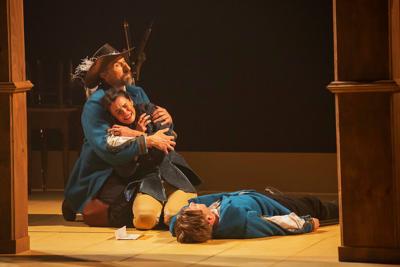 At a time when courting is in global rethink, IRT’s Cyrano de Bergerac offers much more than a diversion about falling in love; we’re gifted with a deep dive into what a loving relationship truly can be if we exercise the capacity to see beyond our own noses.

How, when, emotional intelligence is acquired lies at the heart of this classic drama, with roots in the tale of Beauty and the Beast.

At this point, when COVID-19 requires minimalism, this new three-actor adaptation by playwright Jo Roets effectively strips to the bone the original five-act stage play by Edmond Rostand, recounting 1640s events in France. The play premiered in 1897 at the Théâtre de la Porte Saint-Martin, at a point in time when France was losing its centrality as a world power, and when the industrial age was overtaking romanticism.

This IRT production unfolds as tropes of abiding friendship and love, at breakneck speed, to a heart-wrenching ending. The masterful staging, within a multi-layered utilitarian setting, and peopled through quick changes of costumes, is abetted by subtle shifts of lighting and music original to this production.

Hercule-Savinien Cyrano de Bergerac, who died in 1655 at the age of 36, was a dramatist, duelist, pioneer of what we now define as science fiction, and a dashing soldier at age 19, among even more attributes. He introduced and defined, through his lifestyle, the concept of panache.

Visit irt.live.com to purchase virtual tickets for performances through May 9.

IRT regular Ryan Artzberger is bringing Cyrano into our hearts, along with Jeb Burris and Melisa Pereyra, a real-life married couple, who have both been in IRT productions before, but not together — Burris in Three Musketeers and The Originalist, and Pereyra in Boeing Boeing. This is their first time back on stage in over a year.

Here is the email Q&A with Burris and Pereyra.

RITA KOHN: You each have shared an in-house interview that is part of the printed program, so this NUVO email interview is taking our readers, who also are patrons of IRT, beyond those insights to gain your added insights and experiences as you rehearsed, and performed on the IRT One America stage and with a camera crew as your liaison to an in-place-at-home audience.

As a married couple, you have not been joined-at-the-hip for your active acting careers. Here you are, however, very much joined-at-the-hip having to navigate through this beautiful and heart-rending iteration of a tangled love story, while simultaneously taking on roles outside your primary focus as Roxanne and Christian.

Christian sets out to woo within the parameters Roxanne defines for the kind of person she can love. Enter Cyrano — invisible to her — as she hears the visible Christian.

Jeb, what is the internal struggle you have to deal with, in today’s vernacular — to lose your agency —  as a trade-off to gain Roxanne’s love? What’s going through your mind, knowing there will be a reckoning when it no longer is viable for Cyrano to be the poetic voice? What’s the risk factor in being found out?

JEB BURRIS: In my mind, it's all about accepting the help he needs because of his own self-described shortcomings. "When I'm with a woman, I get tongue-tied —  I don't know the language of love. I think he genuinely believed he could learn from Cyrano and negate his shortcomings.  But that isn't how it works out, and it ends up being his worst fear realized.  Which is he isn't truly loved for who he is, it's a mirage, and it breaks his heart that he can't live up to the correspondence that Cyrano had engaged in.

KOHN: Melisa, what do you have to do to suppress within Roxanne a hint that something is amiss, but be willing to hope it’s not true?

Yours is the challenge to present Roxanne as a person equally worthy of being loved by a person of letters and a person attracted to physical appearance; how do you keep the audience from shouting out, "Hey, can’t you hear, if not see, what’s going on?’ What do you have to do to gain the audience’s heart so as to understand your personal conundrum?

MELISA PEREYRA: I won't presume to encapsulate in one answer whether I have achieved this or not, but instead I can share that I have had many instances in my life where truth stared me in the face and I still could not see it. That is interesting to me. For me to be able to play this is not about whether I can literally see or hear, but rather about asking myself, how much do I want MY version of the truth to be real? And how many stories am I willing to tell myself to hold on to my limited version of the truth?

KOHN: Both of you, can you address: “been there done that unwise choice” — a universal with which audience members can connect — yet this is not intended as a cathartic moment. What are you each — and together — aiming toward and actually achieving for that shining moment of believing your two historic and stage characters are in love?

PEREYRA: For me, it was not difficult to fall in love with Jeb, as he has been my partner for more than ten years now. Whenever we have the chance to see each other again under the lights, I am always happy to share with audiences how much I love him. It is the twists and turns of the story that makes it complicated and like all relationships, these two characters end up hurting those they love most.

BURRIS: I think the love at first sight is there for Roxanne and Christian so that magnetism exists and we get to see that in the production.  That feeling is all Christian has to hang his hat on as he can't actually speak to her.  Unfortunately, as time goes on that love deepens for Roxanne as she believes his words match his exterior, but for Christian, it only becomes more problematic.

KOHN: And then, the reckoning — the so-called “fall of the sparrow” —. It’s gut-wrenching on stage and in real life. Was there pillow talk for the way you each moved into presenting your individual characters? Or could you leave the theater, take off your masks and be ‘ordinary people’ at your rented quarters for the duration of the rehearsal and filming process?

PEREYRA: Of course part of the job is making sure we know how to leave the play on the boards —  but it is certainly true that when we work on something together, we can't help but talk about it when we're not at work too. Jeb and I were scene partners first, then friends, then eventually we got married. But our working relationship and his ability to listen to everyone in the room are things I have valued since the day I met him. I have seen him in a lot of plays and we have acted together in just as many —  I know when I missed the mark but know exactly who to look to when I need support getting back on track. To have that kind of support system while making anything is something I will never take for granted.

BURRIS: Any time we get to work together as a "couple" in a play I immediately feel we have an advantage.  We are able to discuss at home, at least as much as the other is willing.  Sometimes we have to say "Let’s leave work at work!"  But it is a major positive. Sometimes we find great moments in discussion at home that we can bring into the room and have the director help shape. We have been fortunate to play opposite each other quite

KOHN: This streamlined script, adapted for three actors, calls you both to portray an array of supporting characters. For me, it’s a feel of real-time storytelling, a recalling, by two people about events swirling around them. What was your processing/process to inherit all these other characters and bring them to life within your story as Roxanne and Christian?

PEREYRA: I honestly wanted to make sure I was there for Ryan and Jeb whenever they needed me. Ryan (Cyrano) was on stage for just about the entirety of the play and Jeb (playing six characters) was always doing a quick change when he was not in the middle of a scene. I had one character and plenty of time to change backstage [for other characters]. So my priority, as someone who had the luxury of time, was to be a calming and grounded presence for them both when we made it on stage together.

BURRIS: It was a whirlwind for sure. I played six characters. For me, I wanted to make sure that each character was adding something to the story.  Whether that be energetically, physically, or just support for the other actors on stage.  I had a lot of fun doing it, and a lot of anxiety. But ultimately it was a blast. It goes so fast there really isn’t time to think about it. That turned out to be a blessing.

KOHN: What else would you like to share about the major theme of fear of rejection? About ‘appearance’ as a determining factor to connect with each other?

PEREYRA: Fear of rejection has silenced so many people; not just limited to appearance either but rather the fear that we are not good enough to deserve love. But what would happen if we took all that fear, turned it into vulnerability, and decided that we are worthy of love? If we as a society, strived to believe this new truth, perhaps it would help us live our lives from a place of abundance.

BURRIS: I think we all have our insecurities. This play to me is all about being upfront and honest about them with those you love. So much goes into self-protection in this play to not have to deal with these issues. It’s one of the hardest things to do but worth the risk of vulnerability.