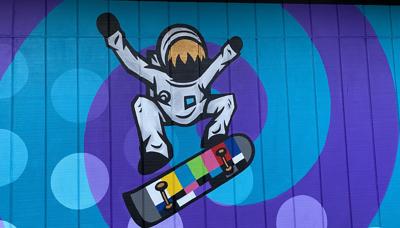 Joy Hernandez has an astronaut named Bean. You might see Bean on Graffiti Alley behind Square Cat Vinyl in Fountain Square. Outside the Monkey's Tale in Broad Ripple. On the side of the Circle City Industrial Complex downtown. Bean the DJ. Bean racing cars. And most recently, Bean skateboarding on the side of the Broad Ripple Jiffy Lube on College Avenue.

Hernandez's character, partly inspired by Snoopy, partly by a childhood friend, and partly by Alan Bean, the Lunar Module Pilot for Apollo 12 and the only artist to have walked on the moon, is quickly becoming a pleasant sight around the city. "Bean can really be anyone and can do anything," says Hernandez. "Doing all the stuff I wish I could do without breaking a bone or something clumsy."

As many hats, as Bean wears, Hernandez isn't far behind. With experience in animation and journalism, she works at WISH-TV as a photographer and editor. A lifelong artist, she founded and owns the Full Circle Nine Gallery, works with aerosol and acrylic, participates in Indy Mural Fest, St'Art Up 317, and shares her creations with private residents on garages and fences and any wall that deserves to look beautiful.

"I like painting murals because of the logistical challenge," says Hernandez. "It's just you and the wall, and the wall is a giant canvas. It's different than painting small, and you better get things right or you know someone will have something to say about that. There's no tucking that canvas away in the reject pile if it's bad."

The artists around Indy have embraced these challenges, and for Hernandez, the rewards are apparent. "We're all inspired by the beauty around us, and art to each of us means something different," she says. "And we find beauty in different things. I was working on a mural in Broad Ripple, and a group of girls started taking selfies by this nearby wall with the paint peeling. They found something interested in that flaked paint, and that was cool for them. Murals bring people out and about and encourage them to explore interesting corners of the city where they might not go."

The rise in businesses commissioning murals, and the work for artists, encourages Hernandez. Expressing gratitude for the support artists had received, especially during the last year when many were sidelined, she eagerly points to the Jiffy Lube Mural Project leading the way.

"So many places want artists to paint for the cost of paint, or for 'exposure.' Paint is expensive, and our time is also worth it, as artists," says Hernandez. "We are having fun doing this, but it is work. Getting a great big unique mural for the cost of paint and a song doesn't really help the artists. Paying them their worth does."

Certainly, many have noted the aesthetic and artistic landscape of the city and how artists' work can drive and support the local economy. Hernandez appreciates the love and loves the appreciation that Jiffy Lube has shown over the last five years.

"Jiffy Lube is putting their money where their mouth is when it comes to supporting local art, and we need more of that in this world," she says. "Be like Jiffy Lube. People enjoy the art on the wall, and it's kind of an unexpected feature."

The success of the mural project, totaling over 20 locations across Indiana, makes the choice to commission work compelling. "There's no excuse for other businesses not to follow suit," says Hernandez. "We are here, and we want to paint your walls and bring beauty, or whimsy, or both to your life. That's way better than the beige wall you currently have. People want those moments of happiness in their lives right now."

Hernandez thinks the happiness that you feel passing Bean skateboarding, or any mural around the city, is rooted in community pride. Hopefully, they make us proud of where we are. For Hernandez, the relationship between public art, people, and history was cemented a few years ago with a mural project in her hometown, Kewanee, Illinois.

In 2018, Hernandez worked with Walldogs, an international "pack" of artists, on a mural for Walter T. Bailey, Illinois' first black architect. It was a point to honor and remember the man from her hometown who coincidentally attended the same high school as Hernandez 100 years prior.

Through six months of fundraising and research of Bailey's blueprints, the project led Hernandez to Tuskegee University, where he taught, to the Alabama church he designed, where John Lewis joined the Civil Rights movement. In the process, Hernandez also met Bailey's descendants, whose handprints are on the finished mural.

"I feel like Walter is an old friend now, even though he's almost exactly 100 years older than me," says Hernandez. "But he went to my high school and did all these great things with the world stacked against him, and his descendants are now my friends, and then we painted a mural. That's what public art can do, bring people together and keep them in touch with their place in this vast world. If I accomplish nothing else in my life, it'll be alright because Walter T. Baily was commemorated in a mural, and he will never be forgotten."

Of course, the nature of public art and murals is one of impermanence. Paint will fade. Weather will take its toll. When Hernandez painted one of the four court murals for SWISH during the recent March Madness, she remembers a certain sadness knowing the work would be walked over and scuffed. However, without that foot traffic, the people literally on top of her art, her contribution wouldn't have been complete.

"I kept thinking these belong to the world now. Like a song on someone else's ears," she says. "You had your original intent in writing the song, but as soon as someone else hears it, they bring their own meaning to it. Street art and murals are like that. I can tell whatever story I want with that mural, but you're going to bring your own history and emotions and story to it, and that will forever change my art's story. That's something amazing, and it makes us all better. We wrote a story together. We wrote a song together. And we don't even know each other."