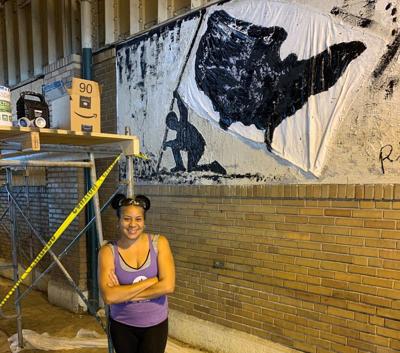 An array of unconventional art materials marked the workspace of Rebecca Robinson, one of the artists creating murals downtown, in partnership with the Arts Council of Indianapolis, St’ArtUp 317, and PATTERN magazine. Robinson was finishing up her work for the day when I spoke with her at the Union Station building at 350 South Meridian on June 11.

Robinson, whose involvement in the art world started at North Carolina Central University while studying visual communications, hasn’t always considered herself a painter. In fact, before she started painting seriously six years ago, she had developed a business making one-of-a-kind handbags as her artwork. “I started losing sight of the artform and was more focused on fashion. I needed a break, I wanted to get back into painting,” she said.

Robinson set out to find her personal painting style and voice, at first using bright, vivid colors and traditional painting techniques. As she advanced, however, the urge for experimentation beckoned her into unknown materials, textures, and surfaces. “I walked into Lowes one day, and I just loaded up my cart with all these weird industrial materials. I picked out some concrete, a caulk gun, some tar, whatever,” she recalls. “I went home and I just started playing around.” The experimentation paid off; Robinson created a series of jazz-inspired pieces that were received well throughout several arts shows and exhibitions. “It’s become my signature style now,” she says.

Robinson’s non-traditional style of working is certainly recognizable in her mural, titled New Nation. The work depicts a black silhouetted figure kneeling in bold contrast against a stark white background. In the figure’s hands, a giant flag showing a map of the United States, in all black.

The inspiration for the piece came for an article Robinson read online about the Black Lives Matter movement. The article showed a map of the country, with each state that had active protests blacked in. “The whole country was in Black,” she recalled. “I said that is powerful that everybody has taken part in this, so I wanted to incorporate that.”

Robinson hopes her mural will relay a message of optimism, strength, and fortitude to the community. “The name of the piece is New Nation because this is a new start, a new beginning, and a sense of empowerment for all of us, especially black lives,” she said. “I want them to get a sense of hope. I think visual messages are some of the most powerful things, and I would love to talk to each and every person that walks by, because everyone’s gonna take something from it.”

In addition to the important messages she believes will be brought forth by the mural project, Robinson sees opportunities like this as vital for the Black arts community in Central Indiana. “There’s a lot of brilliant, talented artists of color here in Indianapolis, and a lot of them go unnoticed. They don’t have a platform, and this opens doors for a lot of people,” Robinson said. “This is a good start. Being a Black artist here in Indianapolis, I see a lot of opportunity, and maybe this will open doors beyond projects like this.”

Kyle Herrington is an artist and curator who has worked in the Indianapolis arts community for over 14 years. He is especially passionate in sharing the perspectives of emerging artists other marginalized and underrepresented voices through his work.