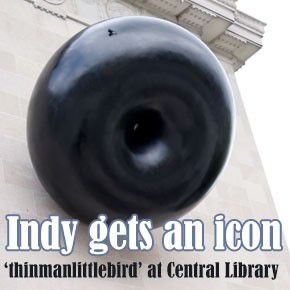 The Soldiers and Sailors Monument on the Circle downtown was completed in 1901. Since that time, Indianapolis has had a fitful relationship with public sculpture. Most of our installations have either been incidental or temporary, seemingly betraying a collective lack of confidence about our ability to recognize the real thing, not to mention an underlying aversion to taking any sort of aesthetic risk.

Peter Shelton's thinmanlittlebird, installed last week on and above the pedestals of Paul Cret's neoclassical Central Library building, are the first pieces of landmark sculpture that truly deserve that designation commissioned in Indianapolis in more than a century. They are a splendid addition to our city.

A $750,000, privately-funded project, the work actually consists of two, discrete, yet related pieces cast in bronze and reinforced with stainless steel. "thinman" is an almost 40-foot, free-standing figure of sinuous lines bolted to the library's western pedestal and rising up, beyond the library roof line. To the east is "littlebird," a torus, or geometric form, that describes a circle rotating on a vertical axis with a life-size sparrow-like bird perched on its outer edge. Shelton has mounted "littlebird" on the library wall, above the pedestal, and canted it outward, so that it appears to float in space. Both sculptures are waxed, giving them a rich, deep ebony patina.

Cret called for sculptures to be installed on the pedestals when he designed the library in 1913. But funding ran out upon completion of the building in 1917, so the pedestals remained unadorned. Pedestals, of course, have become antique anathema to most contemporary sculptors. The challenge of how to deal with these could have been inhibiting.

Shelton's solution is ingenious. Rather than surrender to the pedestals, he has chosen to understand them theatrically, as stages or settings for his work. Thus the pedestals do not define, but serve as launching pads for what's to follow.

Shelton brings an elegant sense of metaphor, evoking the library as universe, to his forms. It is no accident that "thinman" is on the library's western side, with "littlebird" on the east. The former suggests a western cultural striving, a desire to break boundaries, while the latter provides a Zen-like koan, juxtaposing transience and timelessness. Indeed, from a distance, the pair, taken together, recall Zen calligraphy, a gestural combining of seemingly unrelated forms to create a more resonant whole.

But that's not all that thinmanlittlebird accomplishes. The pieces' contemporary energy create a kind of visual prelude, more fully linking Cret's historic, neoclassical design with the embrace afforded by the visionary architecture of Evans Woollen's recently completed library expansion. What's more, the subtle curves and dynamic roundness that Shelton employs provide a welcome whiff of animation amongst the library's staunchly rectilinear neighbors on Veteran's Mall.

Some are bound to be disconcerted, if not completely flummoxed, by Shelton's boldly imaginative art of juxtaposition. The library will doubtless receive complaints. But that's how public sculpture gets a community's intellectual and emotional juices flowing. When they installed a monumental Picasso on the Civic Center Plaza in Chicago in 1967, there was a general outcry. One alderman suggested they tear it down and replace it with a statue of baseball player Ernie Banks. It didn't take long, though, before the city came around to embracing this piece of public sculpture; today, Chicago's Picasso is a city icon.

For the first time in a long time, Indianapolis has a piece of public sculpture worthy of a similar, place-making destiny.

Some say that Julian Opie’s electronic sculpture is an iconic symbol of community building in Downtown Indy, others say it’s just too expensive.