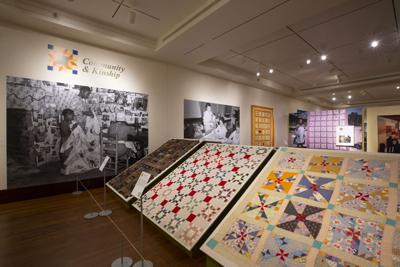 The current exhibitions at the Eiteljorg Quilts: Uncovering Women’s Stories and Powerful Women: Contemporary Art from the Eiteljorg Collection are powerful reminders of the role art can play in female empowerment.

As we walk into Quilts, we are greeted by a vivid work depicting war and a surviving population's flight from Laos to refugee camps in Thailand, and ultimately to the United States. See Lee’s meticulously embroidered story cloth transforms the disruptive agony of the Vietnam War into a testament to the beauty and resilience of the human spirit to endure and build a new life in new places. On loan from California-based Autry Museum, this Hmong story cloth depicts an urgency of forward momentum.

Pulling myself away from See Lee’s story cloth, I headed directly to the “Community Corner” wall with quilts also depicting family and personal journeys to what they anticipated as a safer life in Indiana. Created by members of INfiber, this rotating small exhibit reveals memories of continuing, lost and found family connections.

The overall exhibit “focuses on telling stories of the lives of women from diverse backgrounds in the American West … when [their] stories were not often told in written records,” said curator Johanna Blume. “Sometimes the quilts women make are to advocate for a political idea or to raise funds for a political cause. Sometimes a quilt is made for a dear family member, or in a way that brings a community together or to forge bonds of friendship between women.”

Requiring the closest inspection, however, from my point of view, are the quilts that Blume describes as “made to express unique aspects of a woman’s identity.”

How does a person project personhood through scraps of cloth stitched in moments stolen from the daily claims on her time as a frontier or tribal wife and mother? Mary Etta Crow, who reportedly labored over her “Log Cabin Quilt” from 1840-1849, makes me want to know what was going on behind all that somber darkness —  what she reveals and what she hides mesmerizes. Ernestine Tril, 170 years later, in 2016, endows her Un Barrio with a brightly-hued busyness of life in fast motion. And days after the visit to the Eiteljorg, I’m still weighing the layers of meaning in Holly Wilson’s depiction of life’s delicate balance.

These historic quilts on loan from five Western institutions, are dated 1800s forward. They depict humor and worry, political stances and personal grief. They are shared within three major themes to help us understand the flow of events within the developing Western frontier, as milestones of activism by women taking ownership over their lives, and gaining power within the larger community.

The diversity of quilters is empowering, especially when they speak to the silencing of harm done to women, physically, emotionally, intellectually, and this does call attention to the need for conversation within the larger community — not just among women. The Eiteljorg Storyteller Magazine alerted me to pay particular attention to Susan Hudson’s Navajo quilt "Missing and Murdered Indigenous Women since 1492" in which depictions of the clothing and moccasins of the lost become powerful and disquieting reminders.

In the rotating exhibit on the second floor, Powerful Women: Contemporary Art from the Eiteljorg Collection “explores the visionary work of Native American women artists who shaped and changed the ways people think about contemporary art,” according to the didactic text. Drawn from the Eiteljorg collection by curator Jennifer Complo McNutt, we experience the expansiveness and intimacy of “The West” through indigenous female perspectives.

In a space all of its own, Luzene Hill’s installation, "Retracing the Trace", considers rape sexual violence against women. One can meditate in silence and perhaps ask why?

'76 Days' is one of the 76 films available virtually or at drive-in.