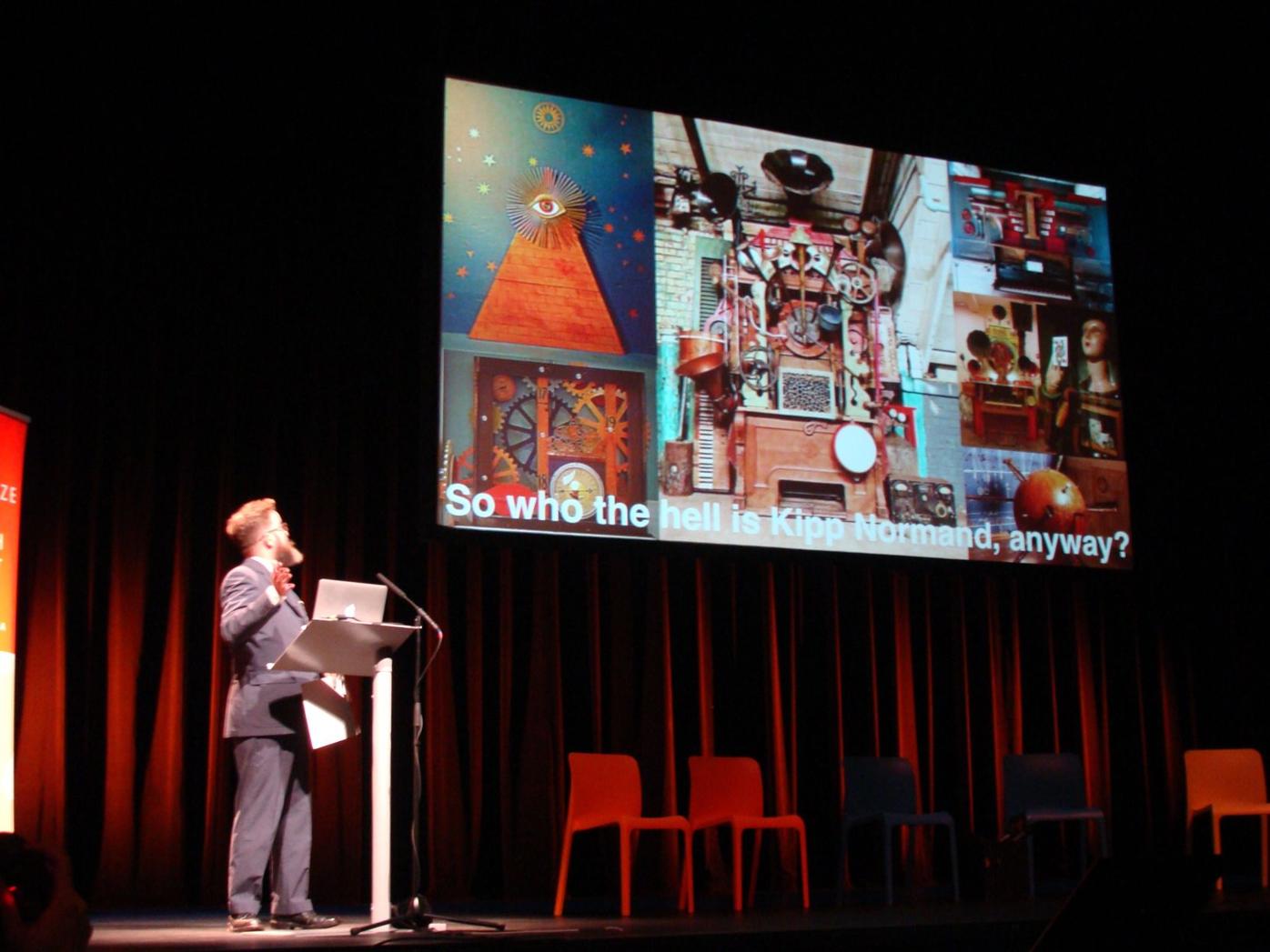 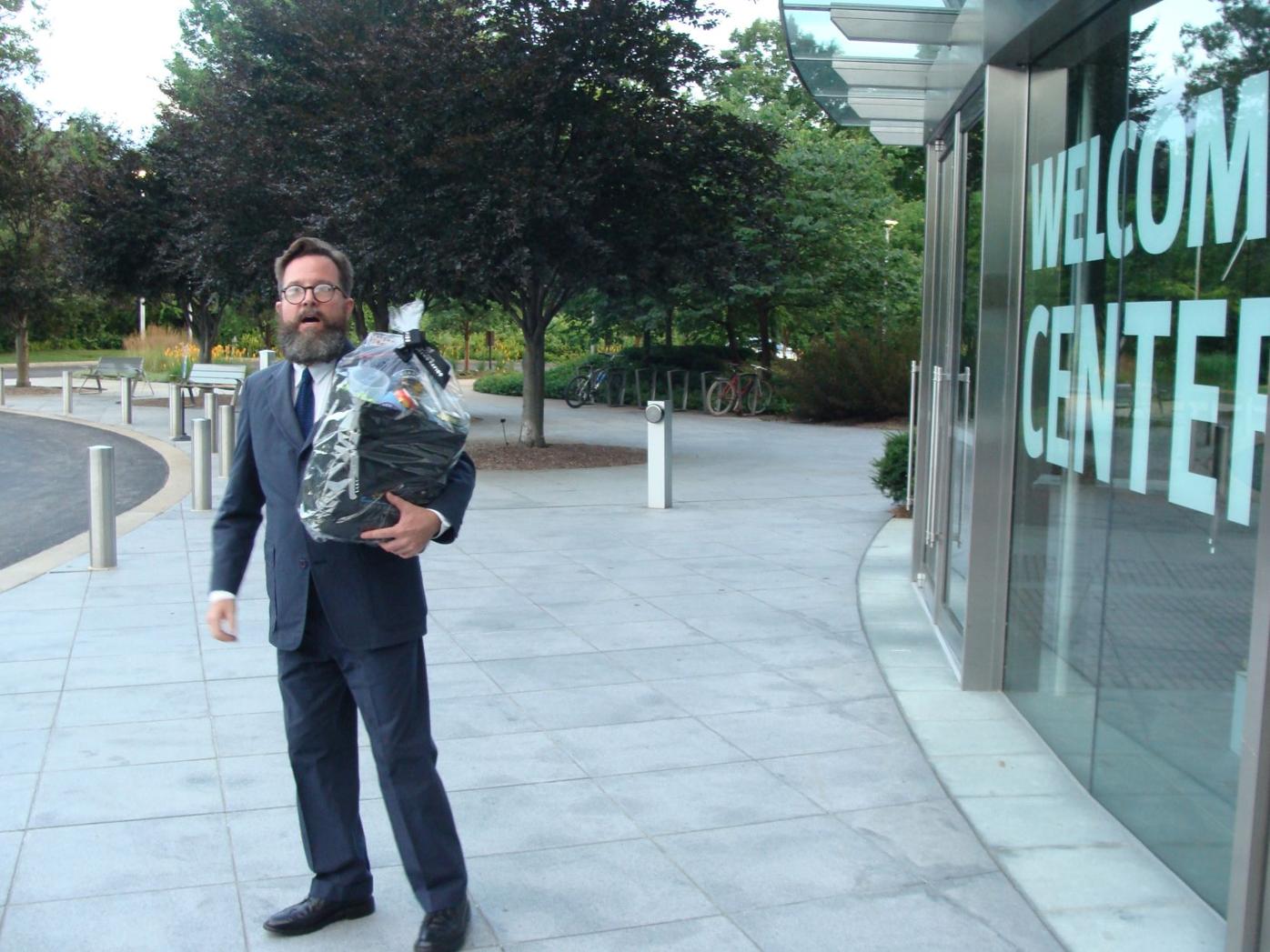 By now everyone in the small but tightly knit Indianapolis arts community knows that Kipp Normand won ArtPrize Pitch Night, which took place in the Indianapolis Museum of Art's Toby Theater. Normand won $5,000, and a prime venue at the Grand Rapids art competition — a former patio space for TGI Fridays — to construct his installation consisting of what he describes as "tremendous pile[s] of broken and decrepit furniture."

And by now, many artists are probably asking themselves what makes for a winning ArtPrize pitch. But before we get to that question, let's talk a little about ArtPrize itself:

Normand was one of five Indy-area artists to compete for a space in this annual 19-day exhibition, taking place September 21 to October 9, in which over 160 artists from all over the world compete for half a million dollars in prizes. The four other Indianapolis artists competing in ArtPrize Pitch Night were Brian James Priest, Lisa Sears, Rachel K. Johnson, and the team of Quincy Owens and Luke Crawley.

Each of the artists or artist groups made a five minute presentation with PowerPoint slides to a jury panel consisting of five art professionals including outgoing IMA Curator of Audience Experiences and Performances, Scott Stulen — who will take over as director of the Philbrook Museum of Art in Tulsa, Oklahoma come August — and Emily Kennerk, the 2015 Indianapolis ArtPrize Pitch Night winner.

Normand won over the panel with a humorous presentation in which he vowed to "go baroque" in order to transform the small entrance of the patio space into a "triumphal entry... inspired by everything from classical architecture to baroque painting, early amusement parks, circus parades and even a good bit of Midwestern American history."

Normand's entry had something that the other entries didn't, at least in the minds of the judges.

It might be worthwhile then asking one of these judges what makes a good ArtPrize Pitch. Former IMA curator Sarah Urist Green — the host of the weekly PBS Digital Studios production The Art Assignment — was looking for accessibility:

"I think the more open your work is socially, the better, and if you creatively engage with the types of crowds, [so much] the better," said Green. "Emily Kennerk's piece last year was super successful because it actively required the voices of people who came by."

Kennerk's "Whisper" utilized the voices of passersby — voices channeled by a microphone to create vibrations that made dishes clatter on a table.

"Emily was there facilitating her artwork the whole time," continued Green. "So having the artists there and available and answering questions and encouraging people to try it and show them how to use it; It all makes for a great piece. But at the end of the day, you have to have a really good idea."

No one — at least no one from Indianapolis — can talk about ArtPrize without talking about the 2014 winner of both the Public and the Juried Grand Prize — prizes worth a total of $300,000 — Anila Quayyum Agha whose light-filled hanging cube "Intersections" has been displayed not just at ArtPrize but all over the world during the past two years, casting its arabesque shadows on both museum walls and passersby. When it was on view at the Grand Rapids Art Museum, it was the setting of a marriage proposal.

Whether "Intersections" was interactive enough to inspire the marriage proposal is a question that cannot be answered, but it surely didn't hurt the dude's chances.

And there's a reason why this interactivity is important, according to ArtPrize Executive Director Christian Gaines who was on hand at Thursday's Pitch Night.

The Indianapolis curator brings experience and enthusiasm to digital audiences.