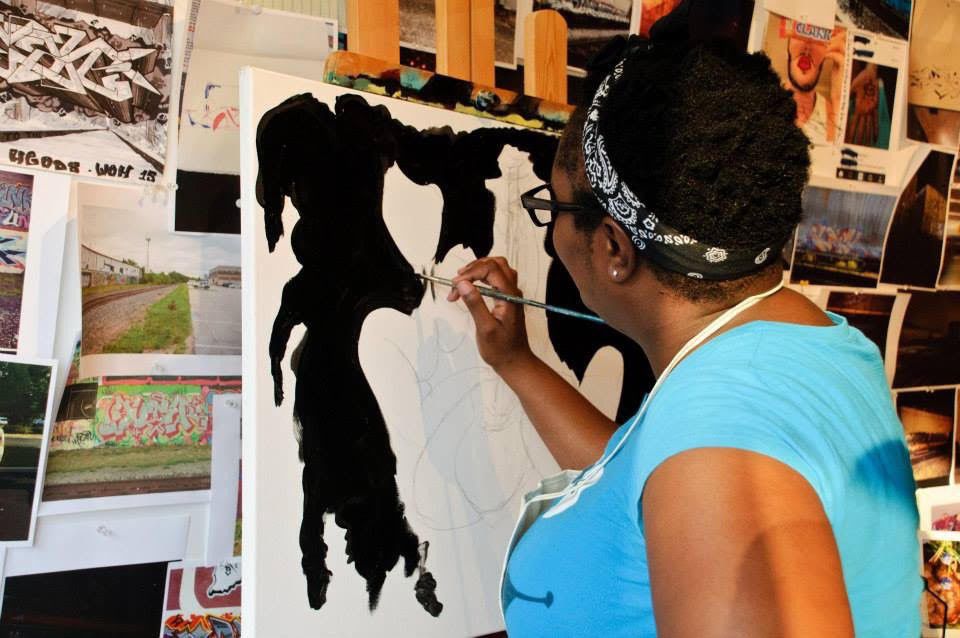 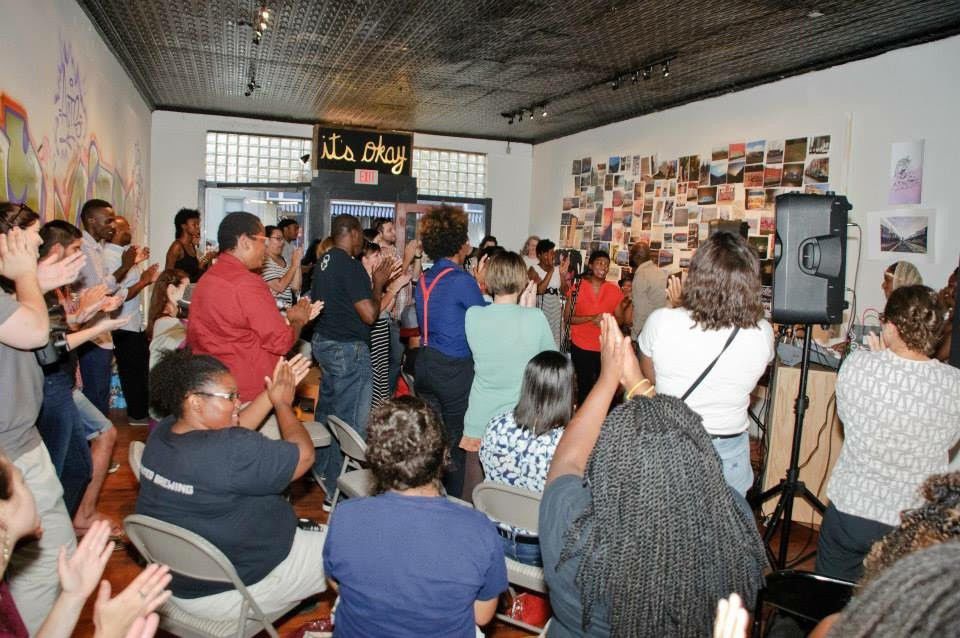 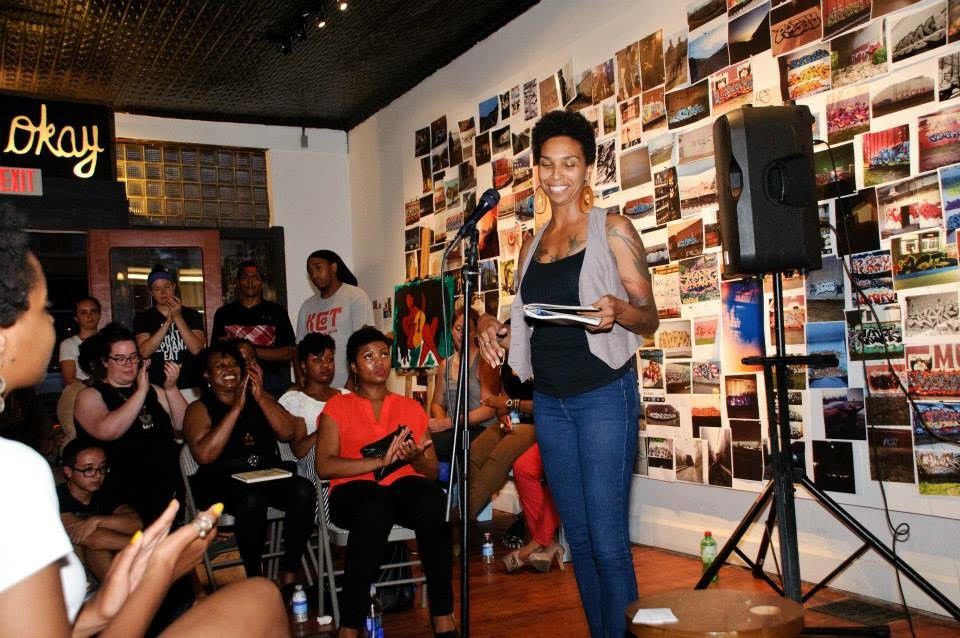 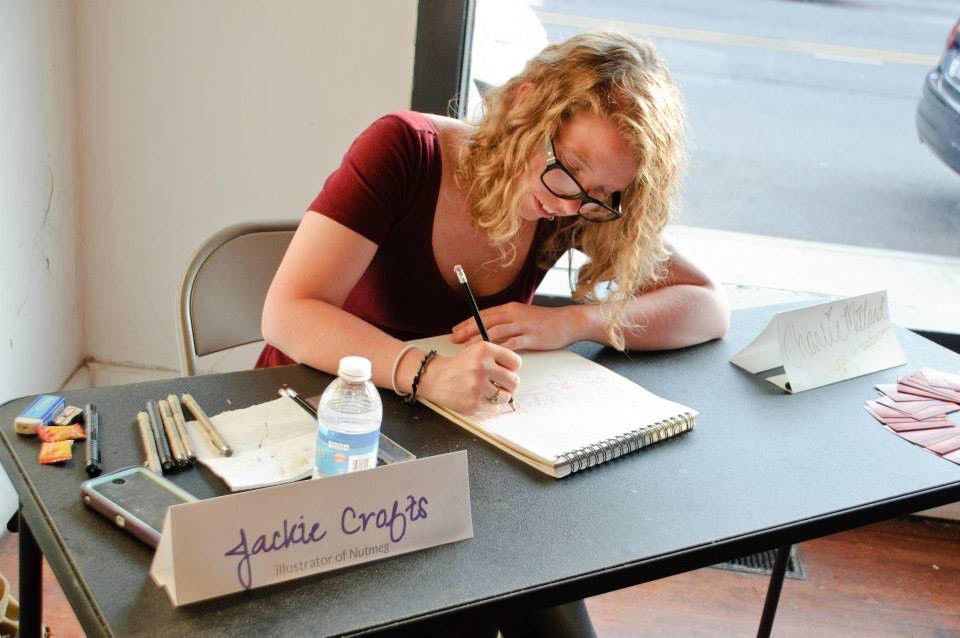 I met with Danielle "Elle" Roberts at Rabble Coffee on the Near Eastside to chat about her upcoming Women317 event.

She pointed to the front of the coffee shop facing 10th Street and told me about the show in May that they held in that same room. One of the storytellers who spoke that night brought two family members with her, one in a full niqab and the other dressed like a stereotypical image of homelessness. The storyteller spoke about her work as a therapist with teenage boys and girls, and how we allow much of our interactions to be dictated by appearances. She then had her two family members stand up to prove the point.

While this isn't a typical occurrence at Women317, it's representative of what Roberts wants people to leave thinking about.

For her, it's about the ideas that are shared through storytelling. When we hear the narrative of someone else's life, we are no longer suspended in a vacuum. Those moments of human connection through artwork tie a face and a name to those we wouldn't see otherwise.

Women317 is a branch of Shehive, an initiative by Roberts to create "safe spaces to deconstruct gender inequity." Women317 performances are the nights where visual and performance artists come together. Roberts is also an occasional Voices contributor in NUVO.

"It's just been a matter of curating a very specific message but giving the space for the women to do their own thing, and not micromanage," says Roberts. When curating each show she imagines who she wants there, and what the show might look like. Though Roberts has seen most of them perform elsewhere, she has no idea what the actual show will be like until that night.

The upcoming event at GPC will focus on women's bodies, and align with the momentum that GPC built after their Difficult Women performances.

"This theme [of women understanding and talking about their bodies] has been on my mind for a long time," says Roberts. "... I have been working for non-profits for a long time, specifically with women and children. One of the things that horrifies me the most is women who don't know anything about their own bodies, specifically their vaginas. Everything from hygiene to sex. We have been taught to be ashamed of our own bodies, and we don't even know how they work."

Roberts would love for this specific theme to snowball into another event where a representative from the Damien Center and a gynecologist would come in for workshops alongside artists. She would also want to see a discussion that is geared toward young women. Part of her vision for Women317 is to have a mentorship develop organically where younger women learn to work on projects with older artists.

Today, though, Roberts is very careful not to go into each event with any kind of political charge.

"Only because with Shehive when we first started a lot of it was based on where I was politically," explains Roberts. "When you start a thing it's hard to disconnect yourself from it. This year I have been trying really hard to dissociate my own personal politics from what we do. The reason being is when you want to engage entirely different subsets of women, that come from different backgrounds, for some people feminism is a no-no word ... But when you talk about this is the real stuff that women go through every day that is a totally different conversation, right. I have been really careful not to get up there and just rant ... that's not the conversation I want to have."

For example, one of the women who helped her start the show is Muslim. "That is the beauty of the thing," says Roberts. "We can all work together somehow even if we don't agree upon everything.

The political and religious differences are rarely, if ever, noticed among the artists. What is easy to see is the cultivation of innovation and talent at these events. Roberts hopes to keep that space to Indy artists — a fair trade style to creative energy.

"We don't do enough as a city to invest in artists who are here and want to, really practice their craft in a serious way," says Roberts. "So that added pressure of 'I am doing all that work and might never see the fruits of my labor' ... That's what I want to highlight — specifically with women. It's not just with music; it's with visual artists, poets, comedians and so on an so forth. The hard work and discipline of women goes unrecognized so often. I wanted a space where it's all about women here.

"Arts and culture is front line in social justice," says Roberts. "We need strong artists who are talking about these issues through their art. We have to have women who are artists, who are strong speakers to be able to talk about those things and force people to listen even when they don't want to. What would Indianapolis be without arts and culture? And what if every artist was speaking their truth in some way?"

It's the humble opinion of this arts editor, sitting in a coffee shop on the Eastside, that it would be a beautiful thing. And groups like Women317 are helping us get there.

• Rae Parker — Parker, of S.Parker360 Art & Design, will be creating live paintings. Lacoiya Reed - Reed, owner of No Expiration Photography, will be documenting the show.

• Hen — A performance art collective where Tender Evans and Lisa Berlin will sing, speak and weave a damn delicious melody.

• Mariah Ivey — Ivey is the founder of The Liberating HER Project, and is hosting a two day conference that addresses Black female bodies on Nov. 6.

• Lauren Hall — Hall is one of the leaders at Indy Pulse, a seven-team spoken word league started by three Indianapolis teachers now in its third season.