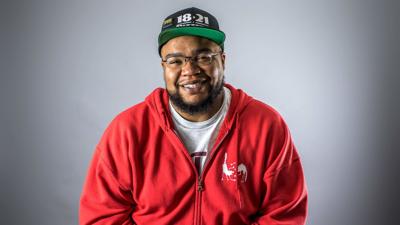 VOCAB co-host Corey Ewing stopped by on Thursday afternoon, April 18 at the NUVO offices not only to read his poem, “Wakanda” for us — it is National Poetry Month, folks — but to also update us on local spoken word happenings including Iconoclast Poetry Slam on Thursday, April 25, featuring Indiana poet laureate Adrian Matejka.

When I first saw Ewing read his poem “Wakanada” at VOCAB at the White Rabbit, I was struck not only by the language and the performance of it, but how it transcended its subject, the fictional nation of Wakanda, from the movie Black Panther.

We have Ewing’s performance on video here, as well as his brief intro to "Wakanda" below.

To learn more about Corey and his VOCAB Tatjana Rebelle, check out this story:

VOCAB: at the Forefront of Spoken Word

Ewing was excited to share information on many events coming up in the Indy spoken word universe.

“On Saturday April 20 that will be Woo Grl Fest. VOCAB [co-host] Tatjana [Rebelle] will be a part of that one,” said Ewing. “It’s going to be at Square Cat Vinyl. After that, Thursday, the 25th at Irving Theatre will be the Iconoclast Poetry Slam. The slam will double as a team selection for Southern Fried Poetry Festival that will be held in June. … We will be taking a team to that first time about six years and that we've done that. The feature for for that night is our poet laureate, Adrian Matejka.”

Matejka, the sixth poet laureate for the state of Indiana, teaches creative writing at Indiana University Bloomington and is the author of the books Map to the Stars and The Big Smoke among others.

The All-Encompassing Poetry of Adrian Matejka

“It's cool to have academia kind of give respect to the slam world,” Ewing said. And that's also a collaborative effort between [the spoken word series] Iconoclast and VOCAB.”

At Iconoclast, Ewing won’t just be competing in the slam; he’ll be acting as a coach that will go to the annual Southern Fried Poetry Tournament, which Ewing mentioned earlier, that will take place from June 5 to 8 in Fayetteville, North Carolina.

The next night, Friday, April 26, Ewing will be involved in ArcadeSlam, which will take place at Georgetown Cinemas at 7 p.m. before the 8:30 showing of Avengers: Endgame.

“It's where a couple of us will dress up in cosplay,” said Ewing. “I will be Thanos.Too Black will be Black Panther. We will be doing a small set. … A portion of proceeds from this show to will go to Code Black Indy. They teach us STEM skills to minority students across the city. So, that will be really cool as well, the money going to good places with all those.”

Ewing also said that VOCAB will be part of the selection process for the poet in residence at IndyPride this year.

“It’s the first time pride has had a poet representation,” said Ewing. “So, that'll be pretty cool, as well. We're already starting to get judges and everything for it. And then Iconoclast would be the second portion of that selection process.”

Do you have a question (or thought) about Indy’s spoken word universe? Click here, and you just might inspire the next NUVO story on Indy's spoken word scene.

Talking with Mariah Ivey, Host of That Peace

The Indiana Poet Laureate will use the award to fund poetry workshops in underserved communities, to set up a digital poetry archive, and to maybe even offer nosh for workshop participants.