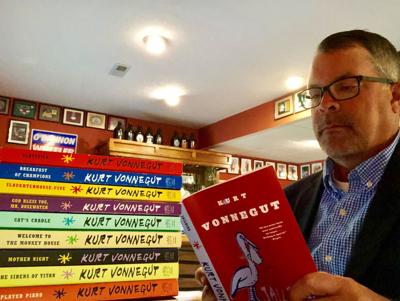 Donovan Wheeler is a guest writer for NUVO. His article here prompted us ask the following question in a Slido poll:  What's your favorite Vonnegut novel?

For the first 47 years of my life Kurt Vonnegut hovered in the periphery of my grey matter. I knew he existed, and I knew why he was relevant. In my college creative writing class, I watched a snippet of an interview — a grainy, videotaped clip where he paraphrased a dramatic principle known as Chekhov’s Gun, which states that every part of a story should add up to a coherent whole.

After college, I sat in front of my 13-inch Zenith and watched George Roy Hill’s 1972 film adaptation of Vonnegut’s iconic novel Slaughterhouse Five. Outside of such moments, the author rarely crossed my consciousness.

That’s probably a hell of a thing to say for a 27-year English teacher holding a master’s degree in writing. Such is the nature of the study of literature. The bibliographies of dead white guys have filled the literary canon’s bucket well past the brim. In the course of high school and college, who you read and who you don’t comes down to the politics of the moment and the whims of your professors.

Vonnegut entered my house about seven years ago, when my son — then every bit of 19 or 20 — puzzled through Slaughterhouse’s pages.  Like a lot of 20-year-olds, he’d outgrown the high school inclination to rely on SparkNotes and earnestly read the book.

Vonnegut entered my house about seven years ago, when my son — then every bit of 19 or 20 — puzzled through Slaughterhouse’s pages.  Like a lot of 20-year-olds, he’d outgrown the high school inclination to rely on SparkNotes and earnestly read the book. Like a lot of people new to Vonnegut, he started with the same book everyone reads first. Like a lot of people, he made it his last Vonnegut book as well.

I don’t know when the epiphany struck me, but a few months before I pulled 1952’s Player Piano from the shelf, I had decided that I was going to read Vonnegut’s novels.

All of them. In order.

At first, I thought that my reward for taking this approach was merely being able to see Slaughterhouse as the fifth novel in a long series … Player Piano excepted (good, but still excepted).  All those references to Tralfamadore, Eliot Rosewater, the Rumfoords, Kilgore Trout, and even Mother Night’s Howard Campbell … all those odd, passing episodes fit a little more seamlessly as I read.

On the one hand this is an oversimplification: Vonnegut’s novels are not The Chronicles of Narnia.  But on the other hand, those books are very much serial. The story, however, isn’t the state of the world as it evolves from the despair of the Cold War to the corrupt horrors of neo-liberal economic policies. Well… yes… it is that, but that’s not the real story.

For me, the story is Vonnegut himself.  Sure, you can get some sense of that if you read his books hit-and-miss.  But to watch them unfold chronologically is to see the man experience all the contortions of an emotionally tortured life, and still find something glorious sitting in the middle of the pain.

It’s an exploration which started early in this process for me, when I closed the back cover of Player Piano and picked up 1959’s The Sirens of Titan. Piano was a good book, sure. It was tight and focused, making prescient commentary on the devastating effects of automation. It rivaled my experience reading I, Robot or The Martian Chronicles. Every bit as forgettable as it was readable.

Then I read Titan. The last time a book changed the way I thought about the very act of reading (and the accompanying act of writing which created it) was when I read Joseph Heller’s Catch-22 as an undergrad.

What consumed me the most was the seven-year gap between Vonnegut’s first novel, Piano, and his later works.  In that stretch of time, as he cobbled together the narrative voice that would define him, trying to make a go of it doing everything from teaching English to selling Saabs, his already painful life suffered another tragedy when his sister perished of cancer two days after her husband died in a tragic train catastrophe (he and his wife would adopt their orphaned children).

Pile that on top his mother’s suicide and his own POW imprisonment in Europe and well… why shouldn’t Ice-9 turn the entire planet into a giant ball of blue polymers?

Critics, of course, cite Slaughterhouse as Vonnegut’s professional turning point.  Dozens more laud Cat’s Cradle as the book which cemented his chops as a legitimate, American voice. But Titan remains the book that did it for me. When Winston Miles Rumfoord makes his episodic materializations on Earth, I realize that I’m reading the words of a man who wants to make the world right.  Rumfoord is a man who is trying to live in the moment but consumed by his past and despondent about our collective future. You can get a degree of that, if you skip the first six books and zoom straight to Slaughterhouse. You don’t, however, experience the full scope of it, and more importantly, I think you miss something a hell of a lot more important than any of the misery.

You miss the love.

I saw in the likes of Rumfoord and Paul Proteus and Eliot Rosewater the vestiges of a Vonnegut who believed that humanity could be wonderful, even amid so much callous hedonism and greed. I saw desperate efforts of one protagonist after the other as they tried to carve their own obscure corners of simple paradise out of their universes of despair.  If you read Slaughterhouse first, you walk away thinking that Vonnegut was nothing more than a pessimist. A fatalist who dismissed humanity as the cosmos’ greatest experimental fuck up.

But if you read Vonnegut in order, you see instead someone who wants to make happiness out of whatever scraps of love he can find. Vonnegut isn’t a curmudgeonly would-be hermit committing “suicide by cigarette.”  Vonnegut is us.

Right now, it’s 1979 for me. Walter F. Starbuck has just left prison. His wife is dead. His son has ostracized him. I didn’t time this journey of mine on purpose. I didn’t plan to read Jailbird —  Vonnegut’s novel about an imprisoned felon who worked in the Nixon administration —  right now, while Robert Muller sits in front of Congress fumbling his way through his testimony.

But here we are.

The past has once again become the present, just the Tralfamadorians told us it would. It’s easy to flip onto our social media accounts, soak in the rampant hostility in the world, and allow the sorrow to bury us.  I think instead, I’m going to follow Vonnegut’s lead. I’m going to accept the horrors with a resigned “Hi Ho” and make the most of the life I have with the ones I love while the moment is ours.

Editor's note: Donovan Wheeler proudly teaches AP Language to some bright and lovably obnoxious kids in a small college town. He also contributes to the craft beer website Indiana on Tap and writes for other publications. He started learning to play guitar two years ago, but he remains terrible at it.

The former NUVO arts editor and columnist talks about his experience with the Creative Renewal Arts Fellowship, his continuing love for Indianapolis, and the property disputes along the beachfront in Michiana, where he has lived for the past six years.