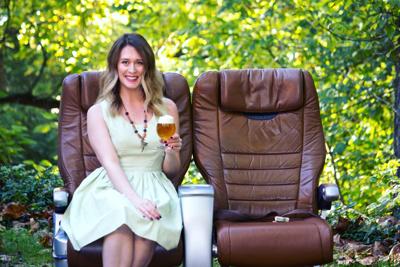 A downtown Indy walking tour of craft breweries was a no-brainer for Amy Beers. So was buffing up her walking tour “Drinking With Beers” by becoming a certified Cicerone, a credential that assures a well-rounded knowledge of beer and hospitality.

It was a fun activity for patrons, and a lucrative gig for Beers (yes, that’s her real name). In January, 2020, Beers announced a second initiative; “Hop on the Red Line with Amy Beers’ new Brewery Guide.”

“Gather friends, don walking shoes, join Amy Beers on a guided tour, or create your own adventure with The Red Line Brewery Guide in hand,” I wrote in a recent NUVO column.

The opening event was announced for March 28. Cancellation, due to COVID-19, was its fate.

So Beers went back to the drawing board and lo and behold, up popped a box: Enter "The Beer Room” to find Amy Beers on hand to welcome you into a social media event.

“The Drinking with Beers Member Club is a shared virtual experience,” explains Beers. “It's a chance to connect with local breweries, support the local beer scene by purchasing carry-out, learn more about beer, deepen your appreciation for the craft, and connect with other local beer aficionados...all from [your] home!

For Beers, “it's the experience of community and visiting local breweries, but from the comfort and safety of home. The idea for the club came as an alternative solution to my tours not operating due to COVID. But the club can be enjoyed regardless of a pandemic.”

Beers lays it out upfront. “There are no hidden costs. It's just $15/month. Everyone gets a free 14-day trial. They can cancel their subscription at any time. Anyone who purchases a subscription can join the club. After joining, members can create a profile. They get access to the video library and curated beer lists (both updated every month), and to the community forum where they can connect and be social.”

Beers releases two new videos each month and updates the beer list accordingly. “The show schedule will be listed on the site; but typically I will upload a new video every other Thursday, just in time for the weekend,” she says. “The beer list is updated at the very end of the month so members have time to purchase the featured beer for the upcoming month's videos.”

Beers says the videos will remain on the site allowing members “to choose to watch whichever video they want at their convenience. There also will be access to archived beer lists if they want to watch a video from six months ago, for example.”

The Member Club becomes available to join September 3 at 7:00 p.m. during the online Official Launch Event. This  live stream event is free but you need to get a ticket, confirms Beers. “Attending this event is not necessary to become a member...just a fun way to celebrate the launch of the club and win prizes.”

To become a member,  and/or participate in the launch event, click this link.

You’ll be prompted to create a profile. After that it’s participatory. You download the beer list and tasting notes for the coming month's videos, and it’s up to you to purchase the beer listed.

“After the video is released, members can watch a drink along with me and special guests,” adds Beers, underscoring, “Members don't have to purchase the beer to enjoy the experience, but it is recommended for full enjoyment.”

The format is straightforward and consistent. Each video highlights a different Indianapolis brewery and plays out in three parts:

“It's like sitting down to chat with them over a beer they brewed and members are, in a sense, there with us having that same beer. “

As I was typing this column, an email popped on my screen about experts recommending that the United States Department of Agriculture revise its guidelines to recommend that adults consume no more than one beer a day and Beer Institute reaction to said recommendations.

Amy Beers has some advice for those trying to make sense of this back and forth.  “Listen to your body, drink responsibly, and when in doubt consult a healthcare professional about your particular drinking habits,” she says. “It's always a good idea to drink water along with an alcoholic beverage and a bit of food doesn't hurt either. Drinking with Beers is not about slamming back a handful of beers in one sitting or seeing how fast you can chug one down. It's about taking the time to really appreciate the craft and sharing that experience in good company."