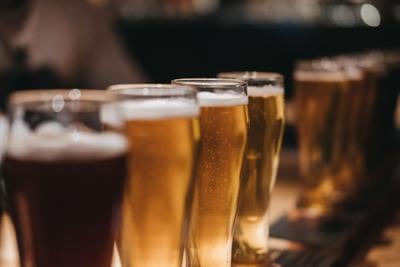 Check your neighborhood Indiana craft brewery and your local grocery and liquor store for what’s newly arriving with ingredients from the 2020 harvest. Arriving in tandem: an across-the-board menu of fresh dry-hopped, new malt, Oktoberfest and pumpkin brews, along with the annual top 40 craft beer list posted by USA Today. Find the full list here.

3 Floyds Brewing Co. comes once again, getting Indiana’s national nod, for Zombie Dust, “a pale ale – formerly marketed as Cenotaph – strongly flavored with Yakima Valley Citra hops; resinous in the nose; fruity and yeasty, placing #22 with a Beer Advocate avg. rating: 4.63 out of 5.”

Snagging the #3 spot, is 3 Floyds’ BBADL (Bourbon-Barrel-Aged Dark Lord Imperial Stout), “Sweet, strong (15% ABV), and so thick that it's almost chewy, with an aroma that's part vintage Port, part molasses. There are a number of Dark Lord variations, in vintages ranging from 2007 through 2019, sold only at the brewery on one day each year…It was June 30 this year – but check darklordday.com for next year's date.”

“The Big Woods Experience” has been growing exponentially since its 2009 founding in Nashville, Ind. The newest, a 4,000 square-foot location at Indiana Premium Outlets in Edinburgh, opens to the public on Sept. 28. According to the news release, “Big Woods Edinburgh will offer full-service dining as well as fast carryout and delivery options to area hotels. A full slate of adult beverages from Big Woods’ Brown County-based sister companies, Quaff ON! Brewing Co. and Hard Truth Distilling Co., will accompany the in-person and carryout menus.”

Sugar Creek Malt Co. in Lebanon, Ind., announced on Sept. 1: “Steeping in our first batch of 2020 harvest today. This is the best barley harvest we have ever had.”   Founder Caleb Michalke added, “I am really excited to see the malt it will make!”

Sun King is stepping in for the COVID-19 canceled annual #CoffeeBeerDonuts Girls Pint Out event, with the Sept. 5 release of Bourbon Barrel-aged Donuts, a collaboration pastry stout made with 500 chocolate donuts from Jack’s Donuts.

Sun King Brewery opened in July 2009 as a production brewery with a taproom to showcase their core beers. In 2018 they introduced spirits. Now, in 2020, SKB is introducing mixed 12-packs of Sun King Hard Seltzer in 12-ounce cans featuring black cherry, mango, passion orange, and lemonade.

“Since the days when we were developing the plan for Sun King, Dave (Colt) and I have never stopped dreaming of new beers and new ideas,” said Clay Robinson, co-founder of Sun King Brewery. “Our hard seltzers are the first of many fun new beverages that we’re excited to roll out for the future.”

Triton just tapped their annual Wet Hopped Harvest Rail IPA, wet-hopped with fresh Centennial hops grown in the Beer Garden at Triton Brewing Company®. “These mature hop vines have been producing consistently high-quality cones for years and we enjoy utilizing them after they are harvested fresh,” announced David Waldman.